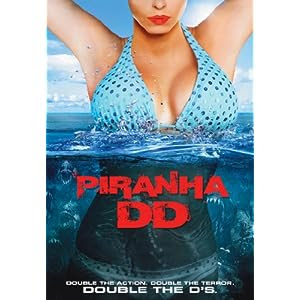 Alexandre Aja’s 2010 remake of Piranha was no cinematic masterpiece, but it was grand fun.  Chocked full of gratuitous (female) nudity and jaw dropping gore, the movie captured the frantic energy of the low budget features that filled in the slots between the blockbuster seasons during the 80s.  So when Piranha DD was announced, the filmmaker’s promise to top the prior version seemed unachievable.  But falling short of Aja’s maniacal mix of blood and boobs is the least of this sequel’s problems.

If you saw the preview, you know the plot.  The piranhas survive an eradication program in Lake Victoria (the lake in the Aja film) and find their way into an adult themed waterpark.  Of course, mayhem ensues, shotgun legs are fired and someone learns how to swim in the nick of time.  And, as expected, another sequel is set up in the closing minutes.

Movies like this don’t need a great plot, or even to make sense, in order to be fun.  Aja’s Piranha contained stereotypical characters and clichéd dialog, but wrapped these elements with gory deaths, lots of female flesh and a show stopping assault on a massive spring break party.  This type of film works because, once the plot is set in motion, the story moves at a relentless pace, barely giving the audience a chance to breathe.

Piranha DD fails to match both the energy and spectacle of the previous film.  For starts, the gore effects are rather tame, lacking the successive over-the-top moments that peppered Aja’s film.  Though one scene (hinted at in the trailer) will have viewers of both sexes cringing, most of the gore is limited to bloody water and floating body parts and the film suffers for not matching the original.

While a rushed production schedule and ultra low budget could account for the lackluster gore, Piranha DD has deeper problems.  The script by Patrick Melton, Marcus Dunstan and Joel Soisson, is flat and fails to deliver on the mayhem.  The script has a few attacks leading to the invasion of the waterpark, but the scenes aren’t exciting and fail to build in intensity.  And once the fish enter the waterpark, director John Gulager can’t find any way to generate excitement, which isn’t a surprise as all the victims need do is get out of the pool.  No sinking platforms or boats to be trapped upon, no frantic swim for yards to reach the shore, and no water vehicle/victim interaction.  Gulager is limited to countless shots of people running out of the pool, as any sense of isolation from safety is removed by the setting.

Gulager does attempt to match Aja’s parade of topless women, but his direction is rather dull and uninspired.  While Aja delivered several moments that looked more artful than lecherous, director John Gulager seems content to leer through his lens, neutering his film by delivering the same fratboy viewpoint that horror fans have seen since the 80s slasher craze.

As for the acting, it’s pretty good for this type of film, especially David Hasselhoff’s self-parodying performance.  He’s such fun to watch, he outshines the mayhem and nudity at times, which is not good in a horror film that promises to, “Double the action.  Double the terror.  Double the D’s.”

Yet even The Hoff’s performance can’t elevate this to the level of a decent time waster on a rainy Saturday afternoon.  You’d be better off watching Aja’s remake or John Gulager’s first film, Feast, if you’re looking for cheap, cheesy fun during the winter months.
Posted by Chris McMillan at 7:53 PM No comments: