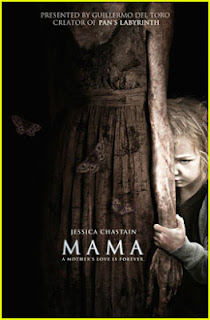 Like most horror fans, I await any film with Guillermo del Toro’s name attached to it.  The man knows and loves the genre and has a deep respect for its fans.  So I went into Mama wanting to love the film.  But the film is too bloated with pointless scenes, superficial characters and cheap jump scares to develop any suspense or fear.

The film during the recent stock market collapse, after Jeffrey (Nikolaj Coster-Waldau), who’s firm is suffering heavy losses, shoots several people at his office.  He flees to the home of his estranged wife, kills her and drives off with their two daughters, Victoria and Lilly.

On a ice covered mountain pass, Jeffrey loses control of the car, which goes off the road.  The three survive the crash, and Jeffrey leads his daughters to an abandoned cabin.  Unable to deal with the collapse of his world, Jeffrey plans to shoot the girls, but a spectral figure kills him before he can pull the trigger.

The film’s credits start, playing over a series of drawings (which, we find out later, cover the cabin’s walls) as the girls change over the ensuing years.  Lilly, just a baby at the time of the crash, becomes feral, walking on all fours, and Victoria soon follows her younger sister.  It’s one of the more effective scenes in the movie, and perfect for setting up the rest of the story.

Cut to five years later, as a search party funded by Jeffrey’s brother, Lucas (Coster-Waldau in a dual role), finds Victoria (Megan Charpentier) and Lilly (Isabelle Nélisse) living like wild animals in the cabin.  Lucas attempts to gain custody of the girls, but their aunt Jean (Jane Moffat) challenges him in court.

Docter Dreyfuss (Daniel Kash), the psychologist in charge of the girls, tells Lucas that he is inclined to side with Jean.  He doesn’t feel the lifestyle led by Lucas and his rock musician girlfriend Annabel (Jessica Chastain) would be a suitable environment for the girls.  But Dreyfuss offers to side with Lucas, and allow them access to a house owned by his clinic, in exchange for continued access to the girls.  Lucas agrees, and he and a reluctant Annabel set up a home for Victoria and Lilly.

But they are unaware that Mama has followed them, and she is very jealous of anyone trying to take the girls from her.  Lucas is attacked and put in a coma, forcing Annabel to take over parenting duties, fend off Jean’s attempts to gain custody and, in time, keep the girls from Mama’s grasp.

The acting in the film is solid.  Charpentier and Nélisse are terrific and it’s easy to believe both their feral behavior (obviously enhanced by make up and CGI) and their slow progression back to a more human state.  All the adult actors are quite good as well.  And the fact that Chastain isn’t glamorized makes the character more realistic than if she looked like a Hollywood starlet playing a musician.
It would be easy to blame the film’s failure on several rather shabby CGI effects (don’t get me started with the hair crawling on the floor; a robotic floor sweeper with a wig on it would look scarier), it’s the script, written by Neil Cross, director Andrés Muschietti and his sister Barbara Muschietti, that causes dooms the movie.  Though the story has potential, the screenplay needed another rewrite to tighten things up and flesh out the main characters and maybe write out others.

The weakest link in the film turns out to be Annabel.  In her first appearance is when she is celebrating a negative pregnancy test.  Annabel doesn’t want to be a mother, though she takes on the role because of her love for Lucas.  That aspect of her character works, but her transition from reluctant parent to caring mother never feels real.  The script makes no attempt to show why the audience should believe Annabel’s change, or why she would form such a strong bond with Victoria, other than this development is needed to move the story forward.

The script never explains what motivated Lucas to spend so much money to continue the search for his brother and nieces, or why he’d risk his relationship with Annabel to care for two feral children.  Yes, they are relatives, but they’ve also lived like animals for five years.  Why Lucas would want custody, or that any court would believe that a normal home environment would be best for the girls, is never answered.

The secondary characters are little more than evil stereotypes written into the script to provide dramatic conflict and for Mama to attack.  It is obvious Dreyfuss is more interested in his research than the girl’s well being, though his true motivation isn’t reveled until later in the film.  And Jean is little more than an evil, rich relative wanting to keep the girls from Lucas for no discernable reason.  The character has no impact upon the story and the film might have been stronger had she been written out of the script.

And by reveling Mama too soon, director Muschietti hobbles the film.  The audience knows Mama is a supernatural force when she stops Jeffrey from killing Victoria, but keeping her unseen would have helped the script.  First, not reveling Mama as a spirit would have been a terrific red herring.  No one questions how Victoria survived, let alone kept her sister alive, for five years in the Northwest wilderness.  If Muschietti had led the audience to believe Mama was human, perhaps a crazed hermit living in the woods, who helped the girls survive, the film might have generate more suspense playing the low key creepy moments in the film.  And the eventual revel of Mama’s true form would have delivered quite an impact.  But, as Mama is shown to be supernatural during the opening scenes, the audience can only wait for the inevitable appearance of her spectral CGI form in an endless parade of jump scares.

That’s not to say the film isn’t without some truly spooky moments.  The playful tug of war scene with Lilly and an unseen opponent, blocked from the audience’s view by a wall, is creepy.  And a few other moments are rather unsettling, but these scenes are overpowered by too many jump scares and pointless dream sequences.  And several of these moments seem added on, as if the CGI effects were added at the last minute to try punching up the tension.

I hate calling Mama a failure, as it could have been the creepy little fairy tale it aspired to be.  But the film’s effective moments are too few, and the script stumbles too often for the audience to become invested in either the characters or the story.  And though it’s easy to make filmgoers jump with a CGI ghost scare, it doesn’t mean they’ll have fond memories of the movie after they leave the theater.

Posted by Chris McMillan at 8:36 PM No comments: