Meg might finally come to the big screen, but is it too late?

Okay, I'll admit, I love Steve Alten's Meg: A Novel of Deep Terror.  It's a light, easy summer read, and despite some painfully stereotypical characters, the novel features some terrific sequences as a prehistoric Megalodon emerges from the Mariana Trench to threaten the world.  It's a big ass shark threatening modern man, with some painful soap opera plot lines threaded among intense, and often graphic, action scenes.

The story is perfect for a summer box office thriller, but the property has lingered in development hell since 1997, when the novel was released.  Disney held the rights for a while, but bulked after Deep Blue Sea was released and underperformed.  Budgetary issues were a problem for New Line Cinema, as the film's budget ballooned to $200 million to bring the massive creature to the screen.  Even with Guillermo del Toro and Jan de Bont interested in directing, the film never found a backer. 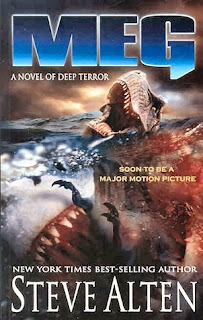 
But today, Variety reported that Eli Roth is interested in directing the project and, based on the returns from Jurassic World, backers are coming forward.  And, while the action might take place in China, rather than San Francisco, I'm interested, but wonder if this film is a bit too late to get past the development stage.

Again, I admit to WANTING to see this novel on the screen.  Yes, the characters are horrid stereotypes, including a disgraced 50 year old deep sea diver seeking redemption for the death of his crew at the jaws of a Megalodon, who finds comfort from his domineering wife (also a TV reporter) in the arms of a much younger Asian woman.  And the novel includes another Asian character (father to the hero's new love interest) overlooking the death of his son by the shark and financing the capture of the monster to show to the world for a cost.  Of course, we get all the comeuppance one expects from such a bland novel. 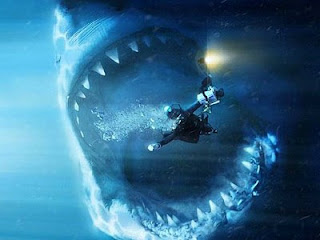 And. come on, this is a moment that would make you wish you were wearing a wetsuit,
as no one would notice your bladder released in the theater.


But oh, the action sequences deserve to be on film.  The confrontation in the trench, the shark's attacks upon the modern world, and....

... the hero's final assault on the creature, as he drives his one-man submersible into the shark's stomach, then pushes aside the corpses of it's victims, including his wife, to cut his way to the beast's heart and stabs it to death.  Seriously, this needs to be an R-rated film, so our hero pushes aside mutilated corpses to burrow deep into the Megalodon's innards to rip it's heart apart (with a fossilized, yet razor sharp, Megalodon tooth; irony much?).  Seriously, I want to see this moment on the big screen.

Yeah, I'd pay good money just for that sequence.  If Roth can deliver on that, I'll be first in line for the premiere in Portland.

But I don't think it will happen.

First, I don't care how graphic PG-13 movies can be, they can't depict a man swimming through a shark's stomach full of it's recently devoured victims.  We are not talking dismembered arms and legs here, but full torsos bitten in half.  And I don't care how graphic the deaths in Jurassic World are, swimming amongst a stomach full of mauled humans will not garner good will from the MPAA. And, to be honest, recent PG-13 shark movies suck.

Sure, Roth could deliver on the graphic nature of the finale, but one has to wonder if the backers will balk at such a scene and demand a cleaner ending to the shark, much like previous films.  Which brings me to my second point.

One has to wonder if monster sharks have saturated the small screen to the point that a big screen adaptation won't work.  For starts, we have Shark Attack 3: Megalodon, a rip off of Meg featuring some silly effects involving real great white sharks and imposed victims, and the WORSE PICK UP LINE EVER (Goggle it for yourself). 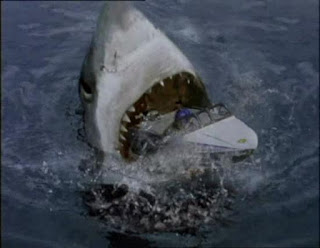 Laugh all you want, it's still a freaky moment.


And we've had Sharktopus, Mega Shark verses whatever, and a slew of other giant shark films on Syfy.  And, after Sharknado, can any film producer expect people to pay over $10 to see a giant shark movie in the theater without snarky remarks from RiffTrax accompaniment?

I don't think this film will work unless it delivers on the novel's final act.  Roth could pull it off, but it remains to be seen if the film's backers allow it.  If they do, it could be the most gruesome giant shark movie ever, making it a potential classic in my opinion.  But the ending is neutered, it's just another film to catch on cable.

Time will tell.  But I hope the final act of the novel is shown on the screen, because getting a Quint eye view of a monster shark would be worth any admission price.