I need to take a moment and wish George Romero a very happy birthday.  I'd like to say he was the person that hooked me on horror, but that's just not the case.  I was already a fan, but Dawn of the Dead changed my outlook on the genre.  Before that film, I was only into horror for the scares, for the unexpected, the jolt of adrenaline that comes from a good jump scare.  But Dawn showed me that horror films could be so much more.

My parents were rather strict when it came to the movies I watched.  I was born LONG before home video was even an idea, and I couldn't get into any R-rated horror film without a parent or guardian.  My mother would let me read anything, so I was devouring books like The Exorcist back in grade school, but I never got the experience adult horror films until I was 17 years old. 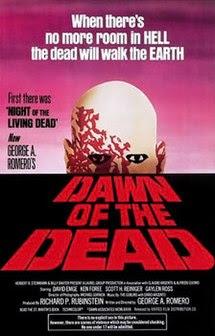 I missed the chance to see Dawn in the theaters (I was only 16, and the local theaters were very strict about the age requirements), but the 80s was a great time to be a young horror fan.  I was able to see countless horror films, from Evil Dead 2 to Zombie and several Corman classics in the theaters and loved every thrill.

But one day, I rented Dawn and my outlook on horror changed.  I bought a used copy, wore it out, bought another one, wore that one out, bought the DVD as soon as it was available, then got the four disc set.  And I keep watching it, at least once a year.  It's the movie I would want if I was lost on a deserted island.

I didn't get what the film was saying at first, as most of my horror experiences till that time were the cheap thrillers I watched on late night television.  But, even with my limited experience in critically dissecting horror movies, I knew the film was saying something.  And once I attended college, which allowed me to see beyond the superficial trappings of art, I understood what Romero was saying in the film.  Regardless of the buckets of blood, the spilled entrails, the gapping holes from bites into flesh, the movie had a message.  It was saying something about the evolving human experience, how our society works to change us and the consequences of such actions.  Over the years, each viewing seems to revel something new, as if Romero knew how societal influences would continue to assault us over thirty years later.

So happy birthday, Mr. Romero, and I can not thank you enough.  I hope this post doesn't suggest I'm degrading your other works.  I love Night, Day, Land and Diary, and Survival was quite fun.  Creepshow is a blast, Monkey Shines is pretty damn freaky and The Crazies is a horrific vision of the military industrial complex.  You've always pushed the edge of horror, but Dawn will always hold a special place in my heart.  You showed me that horror could have a meaning, a way to comment on the human condition.  And you did it with spilled entrails and lots of great, gory fun.  Bravo and, again, happy birthday.

Damn, that shot is still AWESOME!
Posted by Chris McMillan at 9:47 PM No comments: