As Final Destination 2 opened on January of 2003, talks were underway for bringing the franchise to a close with a final film.  James Wong returned as director and, with writing partner Glen Morgan, sought to re-infuse the franchise with the atmosphere of dread and paranoia from the original film.  It’s evident with the opening credits of Final Destination 3, as the audience is treated to a CGI tour of a creepy carnival that sets the stage for the impending disaster.

But David Ellis’ work on the second film affected this production, as the gore and nudity is amped up beyond the previous entries in the series.  It’s unclear whether this was Wong’s doing, or a demand from the studio.  Regardless of the source, the increased exploitation moments undercut any attempts to return the franchise to its atmosphere-drenched origins.

While this film was intended as the final entry in the franchise, the script doesn’t deviate from the basic plot established by the earlier entries.  In this film, high school senior Wendy (Mary Elizabeth Winstead) is attending a graduation party at a local carnival.  As she boards the Devil’s Flight rollercoaster, Wendy experiences a vivid premonition of the car derailing, killing everyone on board.
Snapping out of her vision, her attempt to stop the car from leaving the boarding zone, resulting in the attendants releasing the restraints on her section of the cab to escort her out.  Several other students, all stereotypes from an assortment of previous high school movies, to get off as well.  But Wendy’s best friend Carrie and her boyfriend Jason are in a different section of the cab and depart on the ride, which derails as Wendy predicted. 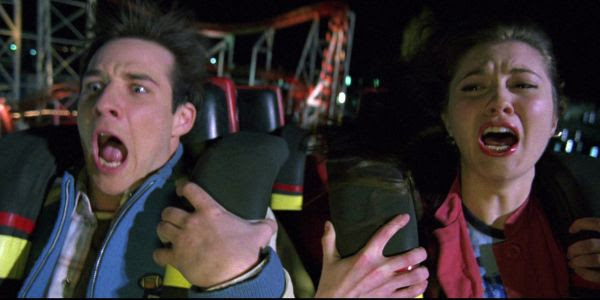 As you might guess, freak accidents start to claim the survivors.  Wendy finds out about the survivor of Flight 180 through Carrie’s boyfriend Kevin (Ryan Merriman) and starts searching the Internet for more information.  Along the way, she discovers the photos she took at the park holds clues to the fates awaiting each survivor.

Even after the opening credits, one can sense Wong’s attempt at more detailed character development and atmosphere than action.  But his effort doesn’t pay off, as these scenes feel incomplete.  A perfect example is when, before boarding the Devil’s Flight, Carrie tells Wendy she plans to end her relationship with Kevin in a few months.  Then after the accident, Kevin confides in Wendy that he’d plan to propose to Carrie at some point after graduation.  It’s a very human moment, as a person learns secrets that change how she views a person and their relationship, yet this plot point is just dropped.  Sure, Wendy keeps Carrie’s secret, but the script delivers no payoff to Wendy’s, and the audience’s, discovery.

However, Wong does develop Wendy’s feelings of paranoia concerning foes both seen and unseen well, playing off moments from the original film.  Wendy keeps hearing one song before another accident occurs, a wind that seems to have no point of origin keeps occurring around her.  Windtead’s performance is very good, conveying the sense of paranoia experienced by the main character that was missing from the second film.

But Final Destination 3 fails on several counts.  First, the CGI in the opening disaster is unrealistic.  Wong allows characters to defy the basic laws of physics to introduce a “cool” shot, fracturing the audience’s suspension of disbelief and making the sequence look more like a Looney Tunes Cartoon than a horror film.

What do you mean, I'm defying the laws of physics?  I never studied law.

The film also includes a prolonged nude sequence, as two female survivors visit a tanning salon, which ends up being the site of their demise.  This bit might be forgivable, but one can’t suspect Wong is criticizing his audience with the inclusion of Freddie (Sam Easton), a previous graduate who is trying to score footage of topless women at the park during the opening act.  He follows the two women, actually stereotypical valley girls, onto the Devil’s Flight, hoping to convince them to flash him, and his camera, during the ride.  This obnoxious character (well played by Easton) seems a rather shallow attempt by Wong to shame horror fans looking for more skin in the franchise.  And once the girls disrobe in the tanning salon, the most prolonged nude sequence in the franchise, it appears Wong is rewarding the Freddie’s in horror fandom for their persistence.  At least until the unlucky pair are set ablaze in the tanning booths, causing one to wonder whether Wong wants to punish the fanboys for demanding such a display, or the women who cater to such demands. 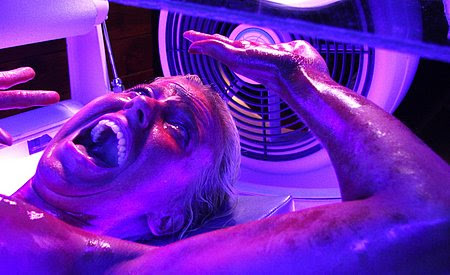 Wait, fanboy vengeance is the only reason I'm nude in this shot?  Where's my agent?!?!

Sexual politics aside, Freddie also delivers a fatal blow to the script in the opening disaster.  But, to get into that, I will tread into MAJOR SPOILER TERRITORY for the next three paragraphs.  You have been warned.

During Wendy’s premonition, the audience sees every detail of the accident, including the events that set the accident in motion.  We get a scene where the brake lines on the car start leaking, as an attendant forces a restraining device into place on one of the riders.  But, the ride might not have ended in a derailment had Freddie not been aboard.

Stalking the two valley girls, Freddie boards the Devil’s Flight behind them, hiding his video camera from the attendants.  As the car goes into a series of loops, he revels his camera and shouts for the girls to, “Show me your titties!”  As before, they are repulsed by his actions and one knocks the camera out of his hand.  Falling onto the tracks in front of the car, the camera causes the brake line to rupture, leading to the eventual derailment.

The problem is, once Wendy comes out of her premonition, snaps out of it, Freddie follows the two valley girls off the ride, taking his camera with him.  With Freddie off the ride, his camera will not be knocked loose (and, after all, the girl who knocks it out of his hand is off the ride as well), inferring the accident would not happen without this final trigger.  It’s a staggering moment of sloppy writing and, as it appears early in the script, makes the rest of the movie suspect for any audience member looking for more than blood and boobs.

So, we are in the sequel, right?

Another problem error is the script ignores the survivors from the second film.  While the events surrounding Flight 180 are referenced, along with the accident from the second movie, it seems strange the only people who thwarted Death are never mentioned.  Though the survivors might not fit into Wong’s original idea for the series, that one can not cheat Death in the end, a brief mention of their deaths, as the death of Alex is referenced in Part 2, would have cleared up this plot hole.

Despite these flaws, the kills are pretty good and the build up to most of the deaths are more Rube Goldberg-est than the second film, and thus more suspenseful.  And while the ending seems rather lackluster for the conclusion of a series, it works pretty well to sum up Wong and Morgan’s ultimate statement, that Death will never be cheated out of its prize.

But as long as writers can concoct bizarre ways for people to die, you know the Final Destination franchise will continue.  So rev up your engines as the series takes on 3D and tries to blow you out of your theater seat. 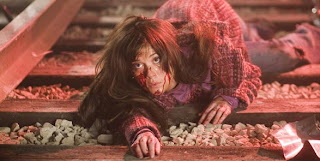 Well, at least I have The Thing prequel to look forward to....

Posted by Chris McMillan at 8:34 PM No comments: