Given the title, Hansel and Gretel: Witch Hunters could have be a glorious slice of cheesy goodness.  But director Tommy Wirkola (best known to American audiences for Dead Snow) delivers a lazy, cliché-ridden movie saddled with a serious tone that sucks any sense of fun out of the story, despite a few moments of humor early on.

The story opens with a brief retelling of the classic fairy tale, but with one little twist:  Before pushing the witch into her oven, young Hansel and Gretel discover they are immune to spells, at least those cast at them.  And if you don’t think that will be important later, it’s obvious you missed the Harry Potter films.

After escaping from the Gingerbread House, the two become renowned witch hunters.  Soon, their journeys lead them to the German town of Augsberg, where, hired by the mayor, the siblings (Brett Renner and Gemma Arterton) start their investigation into the disappearance of eleven children by preventing Mina (Pihla Viitala) from being burned at the stake as a witch. 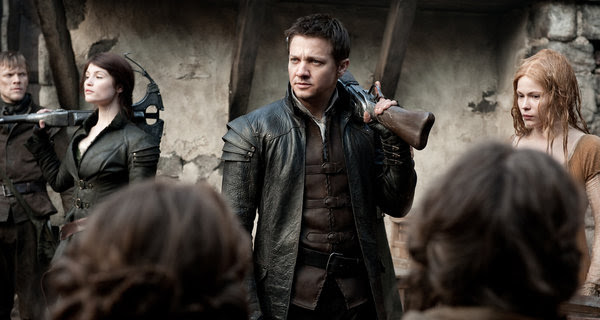 This infuriates the local sheriff (Peter Stormare), who attempts to thwart their investigation, which complicates the sibling’s confrontation with the Grand Witch Muriel (Famke Janssen) and her plans to make her followers immune to fire.  And, of course, part of her plan involves Hansel and Gretel’s arrival in town.

The film starts out with several moments of campy humor, giving one hope for a decent popcorn cruncher, including a vendor selling milk with drawings of the missing children tied to the bottles, and a geeky fan of the siblings played for laughs.  But any hope for a fun, campy film is dosed when the sheriff attempts to frame Mina as a witch.


Sure, he’s an evil character and his attempt to undermine the witch hunters propels the story, but his motivations are never explained.  The script implies a power struggle between him and the mayor, but why he is willing to kill an innocent woman, and sacrifice the lives of the missing children, is never explained.  He’s just a cardboard character, one of many in this film, whose behavior lacks any motivation other than to move the story forward.


But the cliché rut gets deeper.  To no one’s surprise, Hansel falls for Mina, who harbors a secret that is apparent within 10 minutes of her first appearance.  The film also introduces a troll named Edward (Derek Mears), who seems to be attracted to Gretel, yet is compelled to serve witches.  Yes, of all the troll names the filmmakers could have chosen, they went with the sparkly vampire one.  Yet the script never acknowledges it, despite any groans from the audience. At this point, it’s obvious a dark family secret will be discovered, Hansel will learn that some witches are good, (guess who; oh wait, it’s not a surprise) and Gretel will discover her mother’s heritage.  Oh, and Hansel has diabetes from eating all those sweets in the witch’s lair as a child, yet his daily injections become important only during the film’s climax.  Bet you didn’t see that one coming.

While all the characters and situations are cliché-ridden, Gretel takes the most abuse from the script.  In the beginning, she’s smart, sexy and a major ass kicker.  Yet midway through the film, she’s taken down by the sheriff and his men, despite holding her own with several more powerful witches earlier, and needs to be saved by Edward the troll.  Than, at film’s climax, she’s chained to a tree and must be save by another male character (her brother) before taking out a few witches.  While the script does explain her role in Muriel’s plans, it’s horrid that another capable female character ends up a damsel in distress.  Sure, the average filmgoer might not have found Renner chained to the tree as sexy as Arterton, but such a role reversal could have been fun and an interesting twist in an otherwise boring action film.

Most of the cast does what they can with their stereotypical roles.  Jenssen delivers a few delicious, campy moments when the script allows her, and Arterton is good at flipping from ass kicker to damsel in distress as the script dictates.  But I had a problem with Renner, who seemed rather bored with the role.  His character could have used more swagger and bravado, but he takes the easy route and plays it straight, coming off like he’s just interested in collecting a paycheck.

And his performance echoes the main problem with the film.  No one has fun with the outrageous concept.  The action sequences are loud and wild, but lack the sense of goofiness that should infuse any scene involving a blessed Gatling gun taking out a coven of witches.  And if the filmmakers were hoping the R-rated violence would thrill the audience, most of the gore scenes are rather mundane.  Even the IMAX 3D format couldn’t infuse any excitement into the standard blood and guts thrown at the camera.

You might think I went into this film with high expectations, but that’s not true.  I went in with low expectations.  I wanted a Syfy Saturday night monster movie and this film couldn’t even meet those standards.  In fact, I think The Asylum would have done a better job with Hansel and Gretel: Witch Hunters.  Sure, the effects would have been awful and a few past-their-prime 80s stars would be in the cast, but that film would have been much more fun than this big budget failure.

Posted by Chris McMillan at 8:21 PM No comments: