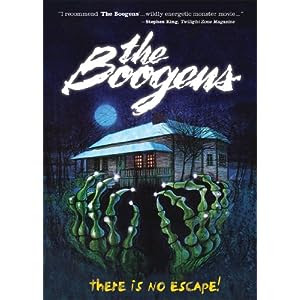 1981 was a banner year for horror fans.  First, we were inundated with over a dozen slasher flicks, including genre classics such as Halloween II, The Burning, The Prowler, My Bloody Valentine and Friday the 13th, Part 2.  The year also included future classics like The Howling, The Evil Dead, An American Werewolf in London and The Beyond, so it’s no surprise a little monster movie called The Boogens became lost in all the cinematic mayhem.  But the film developed a following and is now out on DVD for the first time.

The film opens recounting the tale of a sliver mine that was closed a hundred years ago after a devastating tunnel collapse.  The sole survivor said the miners that survived the cave in were attacked by something living in the tunnels, though his claims were disputed and he was taken to an asylum.
Now a company wants to reopen the mine and has hired two recent college graduates, Mark and Roger, two recent college graduates, to help.  Mark is looking for a break before entering the job market, while Roger just wants to spend the winter with his girlfriend, Jessica, and take advantage of the nearby skiing resorts.

Traveling with Jessica is her friend Trish, another recent graduate with a job waiting for her in the area, and Jessica’s dog Tiger.  They all plan to spend the winter in a house the guys rented and are moving into that night.

Upon blasting open the tunnel, the crew finds a subterranean lake and the remains of the missing miners, little more than a scattered pile of bones.  But they don’t know that the tunnels are connected to several houses in the area (of course, all old houses in a mining town have tunnels leading into the basement, right?) and the night after the blast, Mark and Roger’s landlady is attacked in the house as she gets it ready for them to move in the next day.

Toss in a clichéd harbinger of doom, several revelations (such as Mark finally figuring out the skeletal remains are a disordered pile, not the bones of people that died of starvation or oxygen deprivation) and a very slow revel of the Boogens and this movie becomes a rarity for the early 80s, one that spends more time building characters than wallowing in mayhem every few minutes.

But the slow build works in the film’s favor.  The limited cast of characters/victims are developed beyond standard horror clichés (except for the harbinger) and they all are likable.  The script avoids writing any characters that would lead the audience to root for their demise, so as the cast dwindles in the final act, the audience is left rooting for all of them to survive.

The script isn’t perfect, and contains some clunky dialog, but writers David O”Malley and Bob Hunt deliver a very tight script.  The acting is quite good, surprising given the low budget for the production.  And the filmmakers were very lucky to find animal trainer Karin McElhatton.  As with the husky in John Carpenter’s The Thing, Tiger has enough personality to become a member of the cast, not just a token dog.  Yes, the pooch is that good.

The only disappointment is when the Boogens are reveled, which director James L. Conway keeps saves until the film’s final eight minutes.  And it’s easy to see why, as the Boogens look like a cheap Gamara knockoff and an earlier revel would defuse any tension.  But by showing only glimpses of claws and tentacles for most of the film, Conway keeps the tension high, and earns enough good will to keep you involved until the end of the film.

The DVD release is rather bare bones.  Though the transfer isn’t cleaned up much, OliveFilms found a great print to work with and the transfer looks pretty good.  The only special feature is a commentary with director Conway, screenwriter David O’Malley and actress Rebecca Balding, but it’s one of the best I’ve heard in a while.  Equal parts good-natured reminiscing and a reveling look at the pitfalls of making a low budget film, the commentary track is lively and never drags.  OliveFilms should be commended for putting in the effort to deliver a feature more special than a simple transfer of the trailer.

It might not a rapid paced, blood soaked slasher, but The Boogens has enough charm and energy to make it a lost classic.  And OliveFilms delivers a DVD worth the expense.  Fans of the film will be quite pleased, as will any horror fan that decides to check this one out.
Posted by Chris McMillan at 3:50 PM No comments: