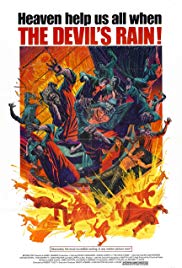 After the release of The Exorcist (1973), filmmakers started producing films to capitalize on its demonic success.  Some, like the Italian/United States supernatural film Beyond the Door (1974) followed the template set by the profitable film.  Others, like 1976's The Omen and 1975's Race with the Devil, focusing on Satanic covens causing problems for the rest of humanity.  1975's The Devil's Rain followed the Satanists among us trend, telling the story of a family's attempt to defeat their heritage, capped of by an amazing special effects ending.

The film sets up the conflict right away, as Mark Preston (William Shatner) is searching for his father, who has gone to see the coven's master Jonathan Corbis (Ernest Borgnine) over a book containing the names of the souls Corbis has corrupted in the name of Satan.  Returning to his family's home, he tells his mother (Ida Lupino) he hasn't found his father, and the heavy rains have flooded the area, hampering his search.

But his father is able to return, warning that Corbis coming for the book before melting into a puddle of green/white goo.

Mark is ready to brave the storm at this point, but when he attempts to leave, his mother is kidnapped.  Heading out the next day, after the storm subsides, he confronts Corbis, fails in a test of faith and is captured by the Satanists.

To be honest, Shatner didn't have the cult cred he enjoys today, so the fact that he becomes a victim of the cult wouldn't be as shocking as it would be today.  But we spend enough time with the character to expect him to be more of a heroic figure than his defeat at the hands of Corbis.  Still, he manages a heroic moment later in the film.  But we'll get to that in a moment.

Wait, this can't happen to me.
I'm not wearing a red shirt!

At this point, I'm posting a SPOILER ALERT for the next few paragraphs.  But, to be honest, the trailers, TV commercials and the poster do a good job of telling you what to expect, so this spoiler warning is only concerning how the script leads to the melting finale.

The film cuts to a display of ESP monitored by Dr. Sam Richards (Eddie Albert) and assistant Tom Preston (Tom Skerritt), with Preston's wife Julie (Jone Prather) as the subject.  Julie sees ominous visions concerning her husband's family as Tom receives a message concerning their situation.  The two head out to the desolate ghost town Mark visited, after being warned to take extra water and gas by the local sheriff (Keenan Wynn).  I mention this because it becomes a major plot hole later.  Trust me.

Tom and Julie arrive in the town and confront one of the Satanists (John Travolta, in his first film role).  Thanks to her handy ESP, Julie sees the history of the Preston family.  The couple escape, but Tom stops the car outside of town and decides to head back to find Mark.  Julie drives off to tell the sheriff of what they've found, but is captured by Mrs. Preston, now an eyeless, mindless minion of Corbis, hiding in the back seat.

Tom infiltrates the ritual that turns Mark into one of Corbis' minions, but is unable to help and is eventually discovered by the Satanists.  He manages to escape, racing back to the family home to tell Dr. Richards of everything he witnessed and find out that Julie is in the clutches of the cult.

Oh yeah, we're up to the task of taking out a bunch of Satanists.
You take the lead.

Okay, time to pause and talk about the plot holes at this point.  Up until Tom and Julie's escape, the film is pretty tight.  But neither of them see the cloaked Satanist in the back seat of the car, even though it's daylight and he's looking into the back seat as Julie drives off.  It would have been different had the scene taken place at night, as all the Satanists were black cloaks.  But something tells me you'd see someone hiding in the back seat of a car in broad daylight.  Also, Tom makes it back to the house pretty quick for a trip described earlier as needing extra water and gas to get there and back.

But let's skip these little lapses and get to the good stuff.  Tom and Dr. Richards head back to the ghost town and find The Devil's Rain, a Satanic Faberge egg containing the souls Corbis has corrupted.  Tom tries to stop the Satanists from taking Julie to their alter, but Dr. Richards threatens to destroy the egg unless the couple are set free.  Mark takes the egg from him and all seems lost until Dr. Richards somehow convinces Mark to destroy the egg.

And, as expected, mayhem ensues.  And what glorious mayhem it is.

Trust me, the Wicked Witch of the West has NOTHING on this
melt-tastic scene.

While the finale is really impressive, it brings up another big plot hole.  If you remember from the beginning of the film, Mark's father melts in the rain, and it's another rainstorm that dooms Corbis and his followers.  So, it follows that the desert is the perfect home for Satanists, as the weather under The Shadow Over Portland might hamper their ability to move about.  At least they had better sense than the aliens in Signs.

I never saw this film when was released in theaters.  I don't think it made it to Vancouver, WA., and even if it did, I doubt my parents would have driven me to see it.  Yes, the film is rated PG, but this was back in the mid-70s, and such a rating is not in line with today's standards.  I suspect the film would have garnered an R-rating now.  That said, the melting scene at the climax of the film is AMAZING, despite running a bit too long.  The sequence was allegedly lengthened by executive producer Sandy Howard, who re-cut director Robert Fuest's original version.  It's not hard to understand Howard's, as the promotional material focuses on the climax of the film, but the melting sequence is goes on a bit too long and lessens the impact.

Despite any problems you might have with the script, the film looks amazing.  Fuest (The Incredible Dr. Phibes, Dr. Phibes Rises Again) delivers some beautiful shots of the desert, and the tracking shot as Mark tries to escapes the Satanists is wonderful.  Fuest's work elevates the film beyond the schlock one might expect, and deserves more credit than has been given.

Yep, this is an underappreciated movie, with critic Roger Ebert considering it one of the most hated films he's reviewed.  But I don't understand his complaint, considering the pace of the film and the performance of the cast, which keeps the film from descending into camp.  But Borgnine steals the show.  His Corbis could have become a moustache twirling cliche, and he does come close.  But Borgnine stays below such a crass stereotype and delivers a great villain.  And when he becomes a demon, he manages to keep the character as believable as one can expect from a goat headed monster.

This is how he first appears in the film, and he's still
CREEPY AS HELL!

So, let's talk about the makeup.  The Burman Studio is credited in the film, while IMBD lists Ellis Burman Jr. as the special effects artist.  I'm not sure the reason for the discrepancy.  Perhaps Ellis took lead the effects team, but it was obviously a team effort.  Ellis' father, Ellis Burman, was the head of the Don Post Studios lab.  And, according to the Internet, the life cast made of Shatner for the film later became a mask of Captain Kirk, and that mask turned into the one worn by Micheal Meyers in John Carpenter's Halloween.  And, as mentioned by Derek Koch when we talked about the film on his podcast Monster Kid Radio (link below), Shatner does a head turn that echoes Meyer.  And I agree.  I can't say whether Tony Moran saw The Devil's Rain, but one can't not see some similarities.

The film was distributed by Bryanston Distributing Company, which also released the original The Texas Chain Saw Massacre, Andy Warhol's Frankenstein and Dark Star.  The company also distributed a lot of pornographic films, including The Devil in Miss Jones and Deep Throat, and was liquidated when Anthony "Big Tony" Peraino was persecuted for obscenity charges related to the video release of the latter film.  Bryanston Distributing Company is now a privately held company and has acquired rights to several movie libraries.  Hey, the more you know....

To sum things up, I'm not going to say The Devil's Rain is a great film.  The negative reviews are considered what led Fuest to return to television, and the film still holds a pretty negative rating on Rotten Tomatoes.  And, to be honest, some of the criticism is spot on.  But that doesn't mean the film is as awful as some critics suggest.  It's a terrific Satanic cult film and more interesting than most reviews might lead you to believe.  Fuest's direction is captivating, Borgnine's performance is amazing, the rest of the cast delivers solid performances, and once the Satanists start melting, you might just find your horror loving heart melting as well. 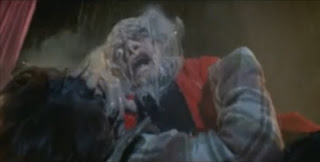 Let's be honest, how many other films can you watch featuring Ernest Borgnine
as a demon from hell melting in the rain?

If you'd like to hear Derek M. Koch and I talk about the film, follow this link to the Monster Kid Radio episode where we discuss it during his Satanic Rites of January theme month.  And if you like classic (and not so classic) monster films, be sure to check out other episodes of his Rondo-award winning podcast!

If you'd like to buy a copy of The Devil's Rain, check out the links below.  As an Amazon Affiliate, I'll get a few cents from your purchase, which will help keep the lights on at The Shadow Over Portland office.

Posted by Chris McMillan at 3:22 PM No comments: