It surprising that three years passed before a sequel to Final Destination hit the screens, as the film earned over $55 million in the US box office.  New Line Cinema contacted screenwriter Jeffrey Reddick (who wrote the original story as a spec script for The X-Files) for ideas on where to take the sequel.  But with most of the original crew unavailable, stuntman turned director David R. Ellis (Cellular, Snakes on a Plane) was hired to shoot the sequel, from a script co-written by the team of J. Mackye Gruber and Eric Bress.

The film opens as Kimberly (A. J. Cook) and her friends are preparing to leave for Daytona Beach for spring break.  While waiting to merge on the freeway, Kimberly has a premonition of a catastrophic traffic accident.  As with Alex in the first film, she begins to see events that will take place before the accident and blocks the off ramp to keep those behind her car from getting involved in the wreck.  Though she manages to keep the people behind her vehicle alive, Kimberly’s friends aren’t so lucky and die as a large truck smashes through her car. 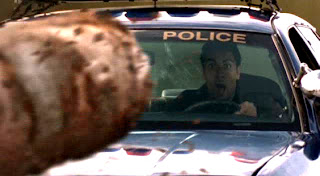 As the survivors are questioned at the local police station, one mentions the events on Flight 180, which happened exactly one year ago.  Dismissing the coincidental timing, the survivors consider themselves lucky for avoiding the disaster, at least until one of them dies in a freakish accident.

Convinced Death is coming for them as It did for the passengers of Flight 180, Kimberly to seek help from Clear Rivers (Ali Larter), the only living Flight 180 survivor, who has committed herself to a padded cell in a psychiatric ward.  Clear refuses to leave the safety of her padded cell, but as the death toll rises, she joins Kimberly in an attempt to break Death’s new cycle and, perhaps, taking herself off the list as well.

After several more freak accidents, the group discovers the course of their lives were altered by survivors of Flight 180 and Death is now cleaning up the mess created by Alex’s vision.  They’re only hope is to figure out the mysterious mortician’s (Tony Todd) vague statement about new life, which was not to be, nullifying Death’s new design.

So I guess I'm in the sequel, right?

Though the script contains a few nice character moments, these are quite brief.  Unlike the opening minutes in James Wong’s film, Kimberly barely interacts with her father.  Most of the other characters are various stereotypes, introduced only to keep the story moving, though this should be obvious when Kimberly and her girlfriend pick up the guys they are traveling with.  These two stoners are so out of place, compared to the girls, that it is obvious their inclusion is only so the scriptwriters can add in a gratuitous nude scene.

It’s not to say the script doesn’t have has a few nice character moments, but the film is more intent on ramping up the gore and mayhem, and Ellis delivers on that count.  The opening accident is the best in the series, a jaw-dropping scene of vehicular carnage that might be the best car wreck ever staged for a movie.  And the ensuing death scenes are much more dramatic than the preceding film, with bodies being flattened, dismembered and impaled at a stunning pace.  And the effects, a combination of practical effects and CGI, still look sharp 10 years later.

Nope, I don't think a few stitches will help....

But the franchise starts tripping on its internal logic with this entry.  And, just to let you know, I’ll be spoiling the ending to both this film and the previous one, so consider a SPOILER ALERT in effect for the next four paragraphs.

The mortician tells the group that a new life, one that occurs because Death’s design was interrupted, might save the remaining survivors.  At first, Kimberly has visions suggesting a pregnant woman holds the key to their salvation.  But she soon discovers that the woman and her unborn child would have survived the initial accident without her intervention.  Recalling other visions, Kimberly believes her death, and resurrection, will end the carnage.  But this plot twist nullifies the ending of the original film, as Alex dies saving Clear, only to be revived off camera by the FBI agents.

It could be argued that it wasn’t Alex’s turn to die (an idea that resurfaces later in the series), but the mortician never mentions that the new life has to occur at any particular place in Death’s new plan.  And the script offers no explanation for this discrepancy, as if the screenwriters didn’t pay close enough attention to the previous entry, or just hoped the audience would forget about that little point.

The link between this batch of survivors and the survivors of Flight 180 also seems a bit stretched.  Not that their back stories wouldn’t work, but it’s never explained why Death waited a full year to take them out at one time, rather than kill them in separate, smaller accidents.  Not only are the odds of everyone being in the same spot at the right time are pretty astronomical, but waiting so long before killing them would further disrupt Death’s master plan.  This new group is targeted because their interactions with the survivors of Flight 180 kept them alive, so one can only suspect how many other people’s fates were changed during past twelve months.

Exploring this wrinkle in the film’s final moments would make for a perfect lead into the next sequel, but the filmmakers settle for a splatstick moment that falls flat.  While the scene ties up a loose end from earlier in the film, the humor feels out of place and the buildup to the death, placing the final survivors in the right place at the right time, stretches believability to the breaking point. 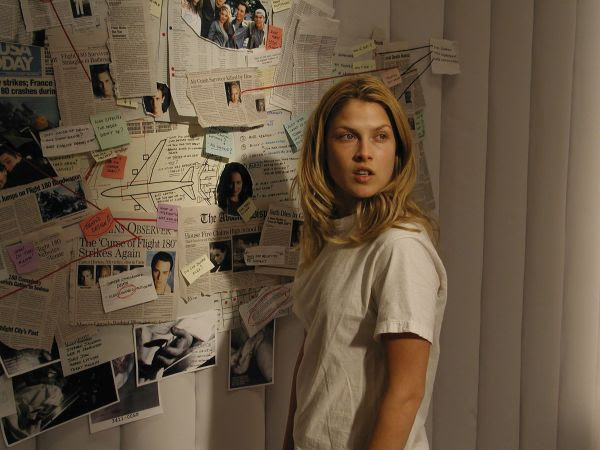 Me, crazy?  What makes you think that?

Despite these quibbles, Final Destination 2 is my choice for the best entry in the series.  The opening disaster is amazing, the deaths come quick and Ellis is unafraid to splash blood across the screen.  And the action comes at such a pace that it’s easy to ignore the script’s shortcomings.

David Wong returns to the director’s chair in Final Destination 3, attempting to recapture the feelings of paranoia and tension he developed in the original.  But he also tries to match the amount of mayhem, blood and boobs Ellis delivered, and the mix doesn’t quite work.  And rather than dealing with a few minor flaws, the script delivers a few near fatal flaws in the opening disaster.  So strap in, keep your hands in the car at all times and get ready for rather dubious twists and turns.
Posted by Chris McMillan at 10:06 PM No comments: