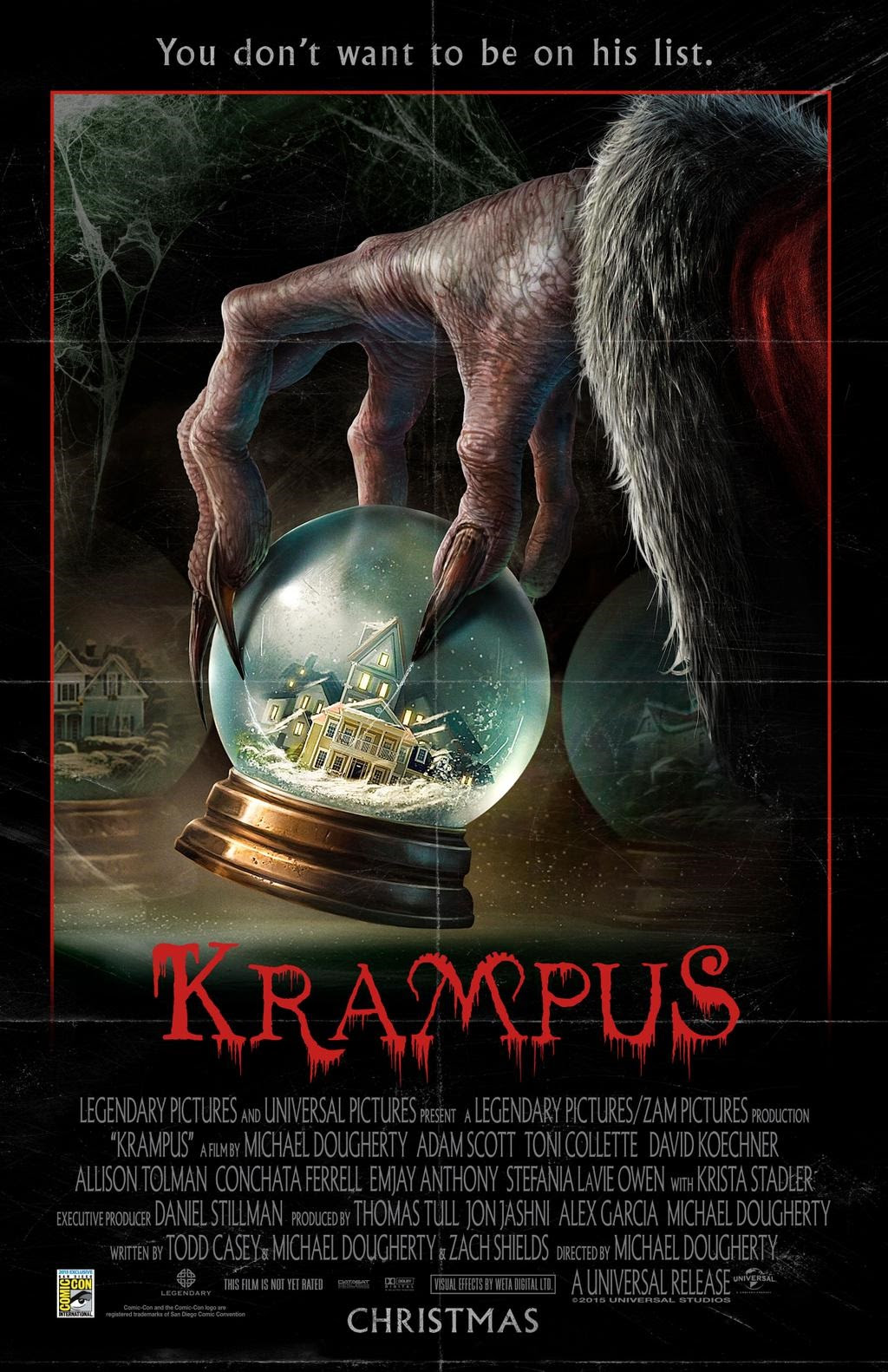 The Christmas demon Krampus is no stranger to The Shadow Over Portland.  We've had our share of Krampus Laufs and burlesque performers portraying the demonic figure.  But Michael Dougherty (Trick 'r Treat) is bringing Saint Nick's dark helper to the masses this year with his feature film, Krampus.

While it does take a few liberties with the traditional story, Krampus is a dark, rather nasty, Horrorday film.  As with Dougherty's Trick 'r Treat, it's not as much of a horror comedy as you might think, based on several reviews and the IMDb website.  Despite the PG-13 rating, this film is bleak and devoid of any life lessons about the holidays you might expect.

The film centers around Max (Emjay Anthony), a boy who's lost his faith in the Christmas spirit.  His parents, Tom and Sarah (Adam Scott and Toni Collette) are in a failing marriage, and arrival of Sarah's sister Linda, and her family, only add to his dismay.  I should mention, Max is a bit violent in his defense of the holiday season, portrayed as normal by a series of holiday shopping battles playing during the credits.

Yep, the expenditure of cash and the pressure to make the holidays "merry and bright" leads to deep seated resentment bubbling to the surface of everyone in the house.  In frustration, Max rips up his letter to Santa and tosses it out the window.  But, rather than falling to the snow below, the shreds are whipped into the sky and soon, a blizzard isolates the families from the rest of the world. 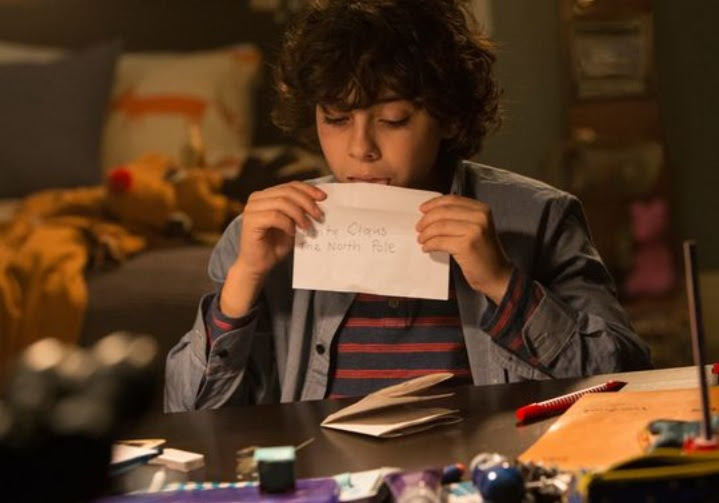 Sure, the discarded letter is a bit Mary Poppinish, but the results aren't as family friendly as you might envision a holiday horror film to be.  Instead of restoring Max's faith in the holiday spirit, the force he unleashed begins dragging away his family members.  Max's Austrian grandmother revels that, as a young girl, she also lost the holiday spirit, resulting in a visit from Santa's shadow, Krampus, which dragged her family and neighbors off the the underworld, leaving her alive to ponder her misdeed.

And oh yes, mayhem ensues.  And, despite their best efforts, family members are taken away in some pretty horrific manners.

The cast is great, with Max's more liberal family playing off well against Linda's more conservative husband and offspring.  Be aware, this is NOT a Red State/Blue State conflict, as the two families come together for their survival.  It's just a family dynamic most people will recognize in their own holiday gatherings.  No sides are taken by the script, it just sets up a conflict for early in the movie, only to be resolved as the two families try to survive the horror engulfing them.  And again, the script avoids any hot button political discussion, allowing the two groups to overcome their differences and fight against a common foe with ease.

It also generates some comedic moments, but I don't consider that making this film a horror comedy.  Unlike films like Tucker and Dale vs. Evil, the character moments, not the general tone of the script, generates the laughs.   Krampus is dark, unrelenting and not a very funny film, despite the humor provided by two culturally different families attempting to find a common ground to survive a demonic onslaught.

And, speaking of Krampus and its minions, it's so nice to see practical effects back on the big screen in a horror film.  Sure, we have a few moments of CGI mayhem, but most of the monsters are practical and look amazing.  Sure, I suspect some CGI was used to erase the wires and such in these creatures, but I can live with that.  And, as I think I mentioned, the design of Krampus was spectacular. 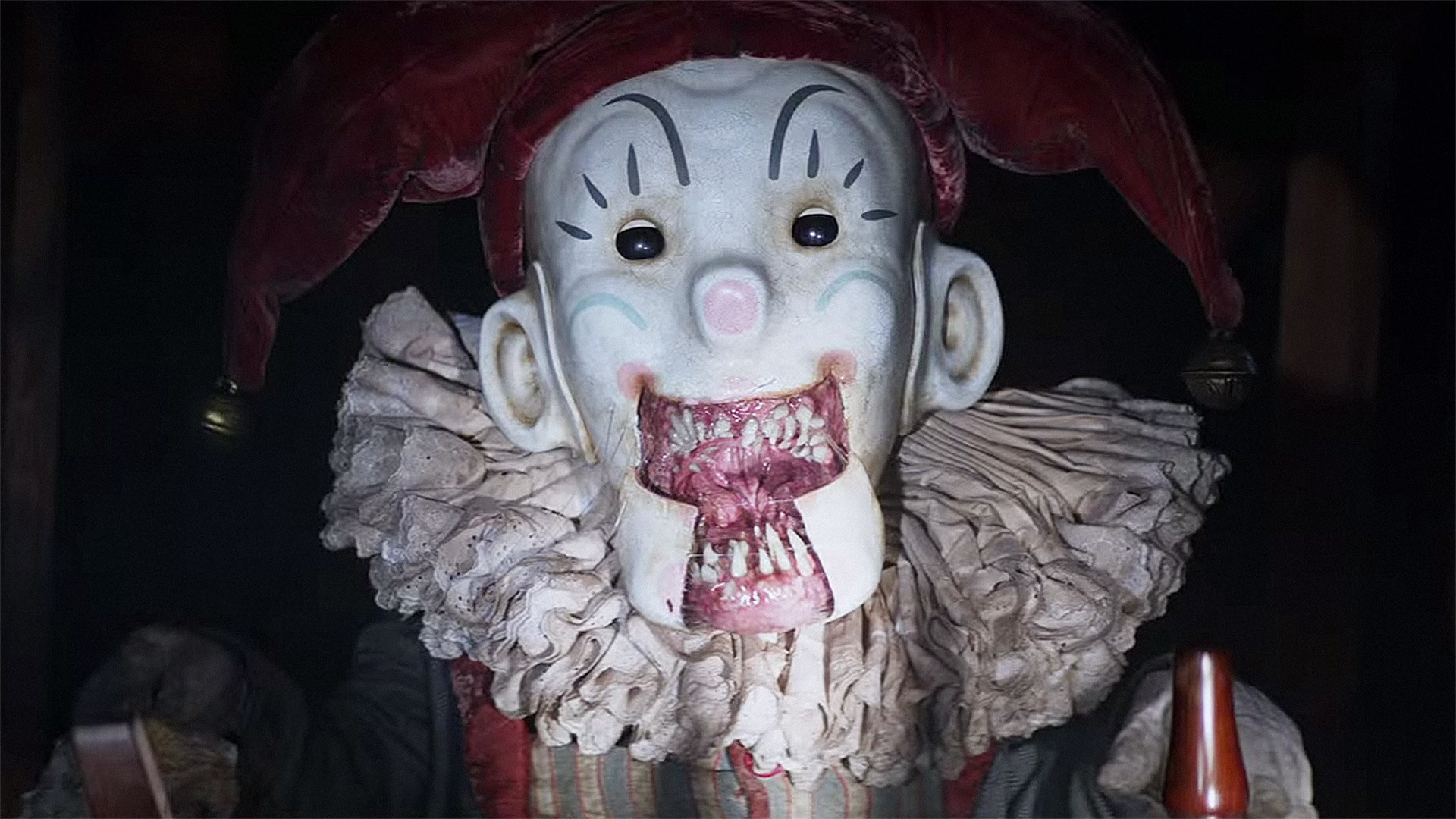 Yeah, that's a picture you want on your Christmas cards.
Well, okay, I do....

And the Krampus design was brilliant.  It echos the idea of a dark version of Santa well, and looks really amazing.  It makes me want to see the character again in another film.

I have to admit, the families under siege storyline was a bit dull.  It's been used so many times before that it became tiring at times.  Sure, the characters did the right things, like not venturing out alone once they became aware of the danger, but it just had a bit of formulaic feel I couldn't shake when watching the film.  Too many moments involved an attack on one group of characters, acting as a prelude for another attack as a second group goes off to investigate.  Even thought the creatures were different, and pretty cool, it became rather predictable and even the new minions couldn't shake that feeling.

And now we come to MILD SPOILERS....

I have to credit screenwriters Todd Casey, Dougherty and Zach Shields for delivering a dark, non-traditional holiday ending, despite the glut of holiday films that makes the suffering of the main character an outlet for finding the true meaning of Christmas (National Lampoon's Christmas Vacation, I'm talking to you!).  As I mentioned earlier, Krampus is not a force trying to make things right, but keeps in the tradition of punishing naughty children, in this case, ones who have lost faith in the spirit of the holiday.  Despite Max's best attempts to right his transgression, he doesn't emerge with a Scrooge-like revival of the holiday spirit.  I'll leave it up to you to watch this film and see how it ends out for yourself.

What, you expect thing to end well with that scene?

I can't call it a classic Horrordays film, as the siege mentality of the film is rather bland, but Krampus is a lot of fun and shows Dougherty is a true master of horror.  Like Trick 'r Treat, this film has no redemption at the end, signifying he knows what makes us afraid of the darkness around us and how trying to find the light doesn't always mean one will escape unscathed.  And that's the true essence of a horror film.

Merry Christmas to all
and to all, a good FRIGHT!