For those unfamiliar with the term, bait-and-switch is a tactic used by retails (and other businesses) when they offer an amazing deal, but don't have the advertised product in stock.  Instead, the salesperson tries to sell you something else, usually with a greater profit margin for the company.

It appears such practices aren't illegal on television, as The Walking Dead pulled such a trick on fans last night, promising something in Season Six, only in an attempt to get you to buy into Season Seven.

Look, I've watched the show since the Season One, and I've sat through some great episodes, and some awful ones as well.  And I get the idea of a cliffhanger, a way to keep your interest up until the next season's premiere.  But Last Night on Earth, the episode that introduced next season's villain, Negan, was hyped as the episode where a major character dies.  Part of the hype came from Negan's introduction in the comic, where Glenn meets the business end of Lucille, but a lot of the cast and crew share the blame, saying how hard it was to read the script and/or film the scene.  Hell, even The Talking Dead got into the hype, with scheduled guest Norman Reedus (will there be a riot?) and a "special guest" (maybe not).  Adding to the excitement was the announcement that the season finale would be extended by 30 minutes.

I could not wait.

But the show felt padded.  Morgan finds Carol, she leaves him, he finds her again, as she's being tortured by one of the Saviors, and breaks his code of not killing people to save her.  And they met some dudes in armor riding horses, who seem very willing to help Carol recover from her wounds.  Nice setup for the next season.

"We're Knights of the Round Table
We dance when e're we're able."

But the main story is about Rick and his band trying to get Maggie back to Hilltop, as the community has an obstetrician and she might be in danger of having a miscarriage.  It's also the dullest part of the show, as the Saviors have set up roadblocks on every road the group tries to take.

Okay, so Negan and the Saviors have the same map, so they'd be able to plan out a way to foil Rick.  But they couldn't have known that Maggie was in need of medical attention and the group would be on the roads at that time.  So, the implication is that the roadblocks were in place, and manned, for whenever Rick and his crew needed to get to Hilltop.  Seems like a waste of resources on Negan's part.

Also, Rick and his group encounter five different roadblocks.  One would think after the second or third, someone in the RV would figure they were hosed and best try to make it back to Alexandria.  Sure, Maggie might lose her child, but should have been obvious to at least ONE OF THEM that the Saviors were in control of the situation.

Okay,  any time your enemy can construct a zombie roadblock,
you are outmatched.

The roadblocks take up a lot of the show's running time (that and a lot of commercials), and comes across as an attempt to pad out the episode, much like a bad B-movie (like Manos: The Hands of Fate) will add lots of driving scenes to stretch out the film's length.  I am just waiting for someone to take all the roadblock clips, speed them up, and replace the soundtrack with Yakety Sax.  It will be brilliant, and I'll post a link when I find it.

Rick finally decides that driving to Hilltop isn't an option and the group leaves the RV to head out on foot.  Eugene (my candidate for the survivor most likely to be caught by the bad guys) will continue driving and keep the Saviors distracted while the rest of them carry Maggie to Hilltop.  But, of course, Negan and the Saviors are psychic and know exactly where Rick and his party will attempt walking the Hilltop.  Sure, the Saviors may be using the same map as Rick to set up roadblocks, but knowing where our heroes will set off on foot is a bit of a stretch.

Regardless, Rick and company walk into a trap and are reunited with Glenn, Michonne, Daryl and Rosita, all of whom were captured last week.  Negan finally makes his appearance and, DAMN, does Jeffrey Dean Morgan nail it.  He's gleefully evil, strutting about in full control while telling Rick and his group they've entered "Pee Pee Pants City."  And, as they've killed more of his men than he's comfortable with loosing, someone is going to die.  He walks down the line of our humbled heroes, picks his victim and....

"Any of you ever play tee ball?"

We cut to his victim's point of view, as the first blow cause blood to flow down the camera lens.  A few more blows from Lucille, and Negan's commenting on his victim's stamina.  A final blow and the camera fades to black, followed by the credits.

Which should have started out with the word SUCKERS in bold print.

"Y'all come back for Season Seven, ya hear?"

Aside from enduring six more months of theories about who died, the ending is just poor storytelling, in my opinion.  Opening Season Seven by revealing who died doesn't give viewers time to grieve, as the story has to move forward at that point.  The death would be reduced to the opening moment in a bigger tale, forcing the audience to focus on what happens between Rick's group and Negan's Saviors, rather than the impact of the character's death.

And, reveling Negan's victim in the last moments of the season finale might have been a better hook than the cliffhanger presented at the end of the show.  More viewers might carry over into Season Seven, just to see how the remaining survivors cope with the loss.  Instead, the show runs the risk of losing viewers angered by the show's build up to, and execution of, Negan's appearance and the cost inflicted on Rick and his crew.

Of course, that all depends on who is at the receiving end of Lucille, which brings up another point.  I doubt the show will kill off a fan favorite in the first episode of a new season.  Think about the ratings hit The Walking Dead would take if Daryl dies in the first few minutes.  Or Michonne, or Glenn, or Maggie.  The initial anger might drive people away, where killing such a character at the end of the season might give people time to cool off and come back for the next season, for the same reason I mentioned above. 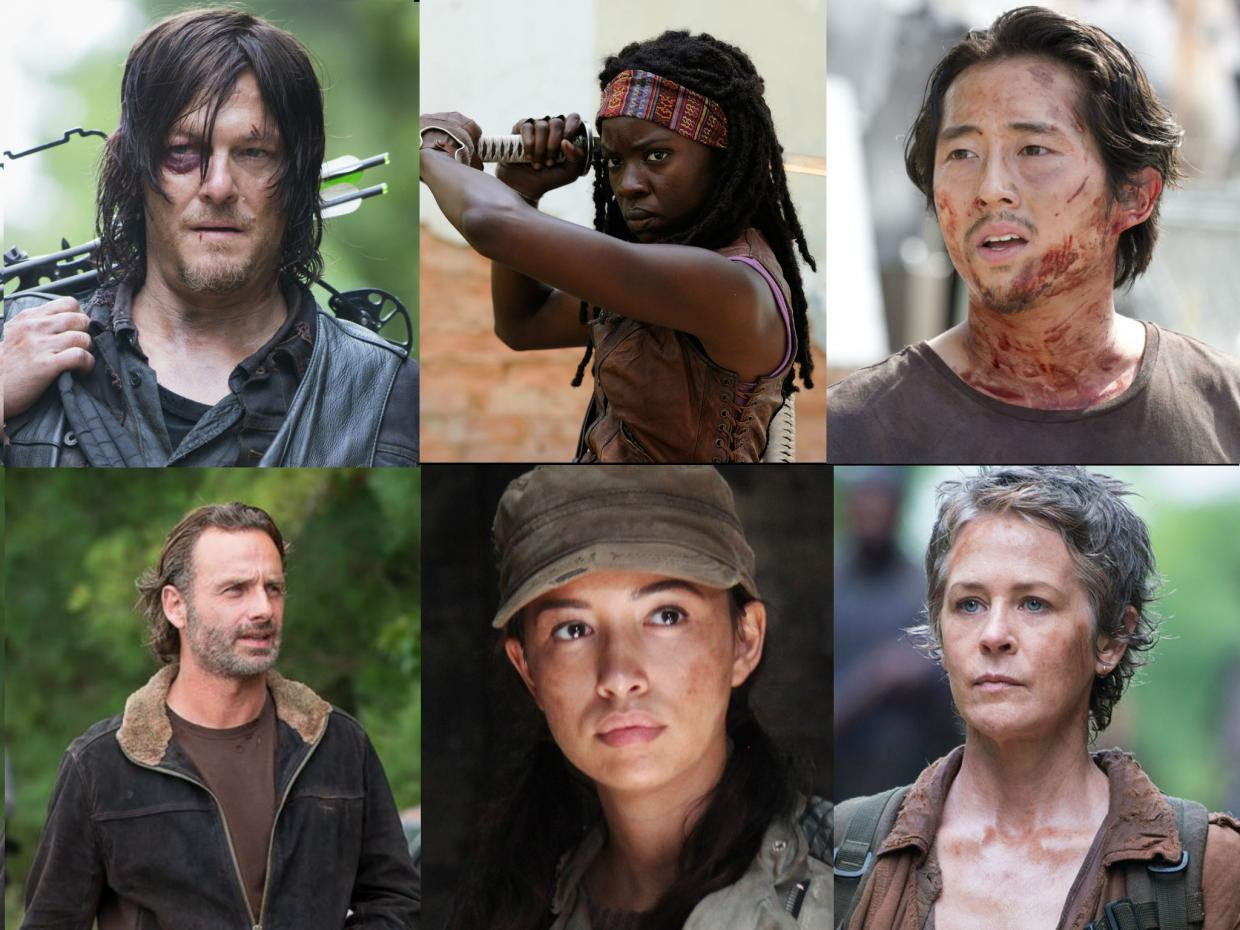 One of these folks is not like the other,
if they die the show can go on...

But that last part is conjecture on my part.  All I know is I, like many other fans of The Walking Dead, felt cheated when the credits rolled last night.  Some might consider me complaining about a show that didn't play out the way I wanted, but I wouldn't be so angry if Glenn or Maggie, my two favorite characters, had died last night.  Instead, I'm upset with the show's cheap attempt to bait viewers into watching the current season finale, than try to sell them on watching the next season opener.  It was a blatant attempt to boost ratings and fans of the show deserve better than that.
Posted by Chris McMillan at 7:33 PM No comments: