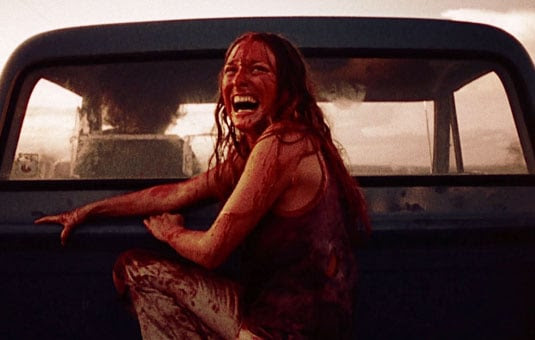 I've held off posting anything about this, as the veracity of early reports were in doubt.  However, it seems Marilyn Burns, best know to horror fans as Sally in the original Texas Chainsaw Massacre, has passed away at the age of 65.

I remember sitting in a theater in 1979 for a re-release of TCM in 1979, unaware of the assault to my senses that was about to occur.  And Ms. Burns' performance was part of that bombardment.  In some way, she became the cathartic release I needed to process the film's final act.  Her hysterical screams, especially during the shot of her in the back of the pickup truck, seemed to channel my reaction to the onscreen mayhem I'd witnessed.  She screamed when I couldn't, as I sat in a chair within the air conditioned comfort of a theater, during a mildly warm Portland summer evening.

And I mention my surroundings because, not only was her performance a cathartic release for me, but it also convinced me of the ordeal she went through, both as a fictional character and an actor.  From all accounts, she (and the rest of the cast and crew) endured horrendous conditions filming the dining room scene.  Yet her face, and vocal cords, were the only record of any emotional response to the heat, fatigue and blood that makes the moment so riveting.  Her performance, however it was coax out of her, makes TMC a classic.

My thoughts go out to Ms. Burns, her family and closest friends.  As with horror fans around the world, I mourn her passing.
Posted by Chris McMillan at 9:55 PM No comments: