Bait (filmed in 3D) is not a great shark film.  The story is predictable and full of stock characters, some of the acting is a bit rough and the CGI effects are marginal at best.  But it doesn’t mean the film isn’t a massive dose of B-movie goodness, the perfect film for a Saturday night viewing with friends and a steady supply of your favorite beverage.

The film opens as lifeguard Josh (Xavier Samuel) wakes up hungover in his car after his engagement party.  His best friend, and future brother-in-law, has a bit of fun with his condition, then offers to set a buoy to give Josh time to hang out with his fiancée, Tina (Sharni Vinson) on the beach.

Of course, things don’t go well, as a very hungry shark is in the water, and Tina’s brother is on the menu.  Despite Josh’s best efforts, the shark will have its meal.  And we all know what that means…. 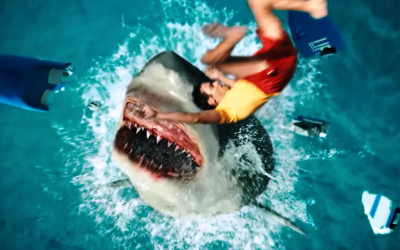 Cut to a year later.  Josh working in a grocery store and of course, while stocking shelves with co-worker Naomi (Alice Parkinson), he sees Tina with her new boyfriend.  Josh’s manager, Jessup (Adrian Pang), notices Josh’s disheveled condition and sends him to the storeroom to clean up, adding to his humiliation.

Jessup has bigger fish to fry, following the trail of shoplifter Jamie (Phoebe Tonkin), which leads to her boyfriend Ryan (Alex Russell), another store employee.  Ryan is fired, while Jamie is arrested by police officer Todd (Martin Sacks), AKA Dad.

Things get even more complicated when Doyle (Julian McMahon) attempts to rob the store.  Though Doyle is doing a fine job, his partner is a bit impatient and kills an employee in an attempt to speed things along.

Oh, and in the parking lot, Ryan comes across an obnoxious couple, complete with an annoying little dog, making out in their car.  So, with all the pieces in place, it’s time for this Australian coastal town to be hit by a tsunami.  Now trapped within the underground, now submerged, grocery store, the survivors must find a way out, while contending with rising water, dangling electrical lines, oh, and two great white sharks roaming the flooded aisles.

What follows is a fun, action filled film that manages to keep your attention, despite the ludicrous situation, stock characters and predictable deaths.  And much of your ability to suspend disbelief comes from the screenplay, by Russell Mulcahy and John Kim.  Once the tsunami hits, the action doesn’t let up, and the survivor’s solutions to the problems they face are quite unique.  Having to traverse the shark-patrolled aisles for the first time, they rig up a mobile shark cage out of shopping carts for one character to wear.  Impractical, perhaps, but it’s brilliant in the context of this movie.

Damn it, what aisle has can openers?

And the script keeps the expository scenes to a minimum.  Sure, Jamie gets to explain the riff between her and her dad, and Josh and Tina have their moment to explain what lead to their breakup.  But the script gives us a bit of a surprise, which is a nice touch and gives the final moments of the film some perspective.

But, to the writing team's credit, the script doesn’t go too far with the personal revelations.  The best example of this is Doyle, whose motivations for the robbery are explained early on, in the most general terms, and never mentioned again.  The script has a moment when he’s talking to Naomi, and you expect to get the full story, but the scriptwriters are smart enough not to go in that direction.  We already know who he is, and his motivations, and the script wisely leaves things at that.

Another important factor in any shark movie are the attacks, and Bait contains some great clean up in aisle 8 moments.  Yeah, if you’ve watched any B-movies, you know who is going to die, but the script manages to delivers a few surprises along the way. 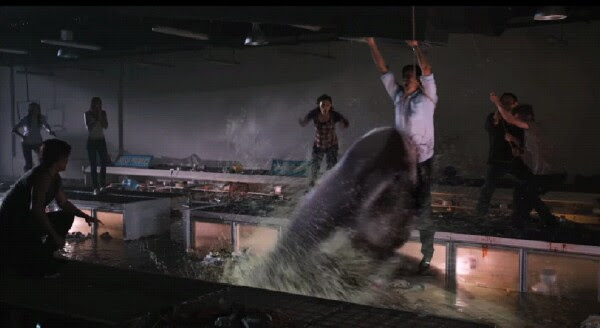 Except for this guy.  Even if the trailer hadn't spoiled it,
you knew it was coming.

The sets are amazing.  Production designer Nicholas McCallum and set decorator Suzy Whitefield did terrific work, delivering a believable environment for the film.  The submerged grocery store set looks amazing and quite realistic.  And one must credit director Kimble Rendall for populating the flooded store with more marine life than just a couple of sharks.  Though most of those fish are used for 3D effects (I saw the 2D version and it’s obvious when those moments occur), it adds to the believability of the environment.

As for the acting, well, the leads just aren’t that engaging.  Samuel and Tonkin are fine, but I just didn’t care enough for their characters.  This might be the fault of the script, as I wanted more time between Doyle and Naomi, and Jaime, as he tries to apologize for the death of her coworker.  It was a nice, understated moment that made the pair more interesting than the disgraced lifeguard and his estranged fiancée.  Maybe the filmmakers could have spent a bit more time on character development, but that would take away from moments of shark mayhem, which is the real reason to watch this film.

But the filmmaker’s desire to pack in mounds of shark-induced carnage is a problem.  I can forgive the Syfy level CGI effects, but the filmmakers treat the sharks as little more than giant killing machines, suddenly craving only living human flesh after a couple of bites, and capable of ingesting multiple victims in a brief time.  I’m no marine biologist, but a twelve-foot shark should be getting a bit full after his second or third human meal.

But if you’re able to overlook the script’s willful ignorance to recent scientific knowledge about sharks, and more public awareness of their habits, you’ll have fun watching these “perfect killing machines” keep the film’s characters fighting for survival.

Oh, so many sharky...
Um, snarky remarks come to mind.

Bait might not be the best shark movie ever made, but it’s engaging, surprising at times, and worth spending a Saturday night watching.  All I can say is I’m happy to have this in my collection, as I’ll be revisiting it again at some point.   Which is more than you can say for the other recent editions to the shark swim amok genre.
Posted by Chris McMillan at 9:19 PM