A bomb upon its initial release, Event Horizon has gained a bit of a cult following over the years.  Originally compared to films as diverse as 2001: A Space Odyssey and The Black Hole, to Alien and Hellraiser, such comments showed critics were off the mark.  The film is a high tech version of a classic haunted house tale, more akin to films like The House on Haunted Hill or The Legend of Hell House.  It's easy to envision Hammer, back in the 60s, making this film, had the budget and technology allowed such a production.
The film follows a deep space rescue ship, Lewis and Clark, as it heads into orbit around Neptune.  Upon awaking for suspended animation, Captain Miller (Laurence Fishburne) and his crew are given the details of their secret mission by Dr. Weir (Sam Neill).

Weir designed a ship, the Event Horizon, with an engine that can bend the fabric of space and allow for exploration into the farthest regions of space.  But, on her maiden voyage, the Event Horizon vanished.  Reappearing after seven years, Lewis and Clark has been dispatched to find out what happened to the ship and her crew. 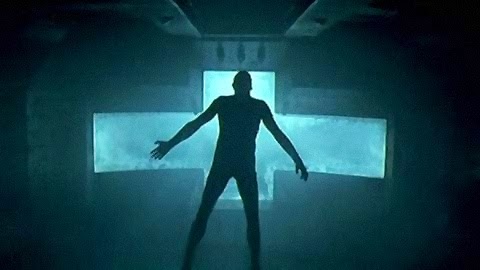 I suspect they didn't find a place full of rainbows and unicorns.
Just a guess...

As expected, the captain of the ill-fated ship was able to release one last, cryptic message.  While no one has been able to figure out what was being said on the recording in the past seven years, one of the crewmembers of Lewis and Clark recognizes the language used as Latin and offers a rough translation, “Save us.”

Of course, all sorts of spooky things occur once the crew boards, and are marooned on, the Event Horizon.  Dr. Weir (yes, his name is one letter away from Weird, a not very subtle bit of foreshadowing) starts seeing visions of his dead wife, Miller sees the burning corpse of a crewman he left to die on an earlier mission, and the resident Latin expert realizes he might have mistranslated the message. 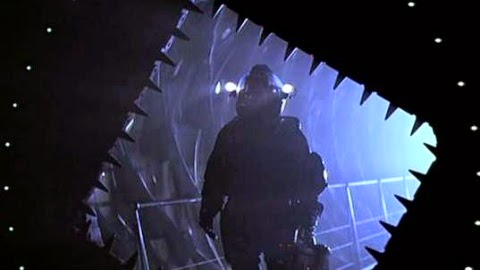 I’m not spoiling anything by saying a mysterious force has infested the ship (it’s another bit of early, unsubtle foreshadowing), which attacks several crewmembers before driving Dr. Weir insane.  Or, at least crazy enough to let the remaining members of the Lewis and Clark that, on its maiden voyage, the Event Horizon traveled through Hell and is planning to return there with a new crew.

Taken as a haunted house film, Event Horizon is quite a bit of fun.  Despite the clumsy foreshadowing, Philip Eisner’s script is a nice, slow burn, which works by not only giving the audience time to accept a haunted (okay, possessed might be a better word) spaceship, but it makes Weir’s journey into insanity believable.  By slowly revealing what building the Event Horizon cost him, his transition into an emissary of Hell becomes quite plausible, keeping him from becoming a simple Pinhead rip off. 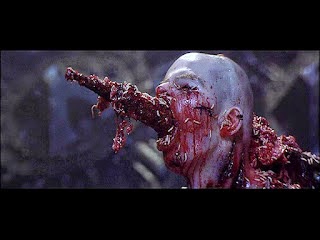 Given his later projects, such as the Resident Evil series, director Paul W. S. Anderson (credited as Paul Anderson) does a great job at keeping the pace restrained until the final act, despite a few minor burst of cinematic excess.  It isn’t until the final act that Anderson allows the action sequences to become more akin to his later films, giving an interesting looks at a director who could deliver something more enticing that a kickass zombie action flick.

But the film’s success owes much to the sets.  The Event Horizon is dark, foreboding and quite different from the other ships in the film.  Bathed in shadows, with curved archways, an endless hall, and an engine room that looks more Gothic than a futuristic society would design, the ship is more like a haunted house than a futuristic space vessel.  Had Weir had mentioned the design of the ship took advantage of eldritch geometric patterns, I’d suspect the crew passed a bit to close to Azathoth rather than into Hell. 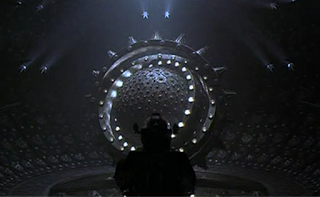 Yeah, not Lovecraftian at all.

It’s unfortunate the intent of the being that inhabits the Event Horizon is never made clear.  The ship is making people relive their hidden “sins,” but only Weir seems to have any reason to feel guilt for the event he is forced to relive.  Miller did let a man die during a rescue mission, and he has every right to feel bad for leaving him behind.  But his action wasn’t based on cowardice (at least such motivation isn’t made clear), but rather to save the rest of his crew.  Another crewmember sees distressing visions of the son she’s left on Earth during her tour with the Lewis and Clark, yet the boy is with his father and, again, the script never suggests the father might be harming the child.  Again, she might feel guilty for her actions, but it is not sinful.

And killing off crewmembers is not a good way to drag the crew to Hell, especially if their sins aren’t enough to cause eternal damnation.  The script never explains how killing off the crewmembers benefits the ship or works to achieve its ultimate goal.  It seems a better plan, once the crew is marooned on the Event Horizon, would be to rev up the drive right away and open the gateway back to Hell.  Yet, this doesn’t happen until a few crewmembers die because of the ship’s actions, lessening the people/souls it can bring back to Hell.  It’s not clear which the ship prefers.  While Weir states the ship wants another crew to bring back to the chaotic realm it re-emerged from, one has to wonder how killing off crewmembers will accomplish that goal.

And when I said the action sequences become absolutely unbelievable during the climax, all I need mention is one character’s return to the Event Horizon, after being blown into space on the wreckage of the Lewis and Clark.  The moment stretches probability in the same way Gravity did at times (yes, I said it, and I stand behind it), making the moment more laughable than exciting.  And, of course, we have an unrealistic decompression sequence, which might have been easier to overlook had the missing crewmember not shown up outside the ship a few seconds earlier.

But the most glaring error is the electronic score during the film’s opening and closing credits.  Given that rest of the score is more fitting to the atmosphere of the film, the electronic dance number used during the closing credits is quit jarring.  Perhaps a slower piece of music to start, transitioning to the techno score, would have worked better, rather than punching the audience in their face with an inappropriate music choice when the ending credits start to roll. 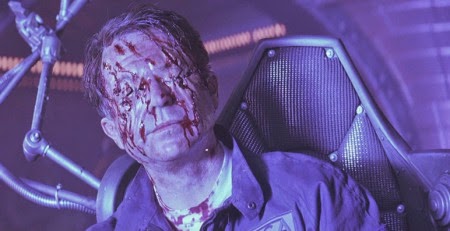 Soundtrack created by DJ I've Come For Your Soul

Regardless of these few missteps, Event Horizon is a creepy little haunted spaceship tale.  It’s not perfect, but it’s better than some of the haunted house movies in recent years.  And it’s nice to see a film that relies more on setting and atmosphere to generate a sense of foreboding, rather than upon props, such as creepy dolls or strange looking demons, to generate a flurry of jump scares in a sophomoric attempt to frighten the audience.
Posted by Chris McMillan at 7:27 PM