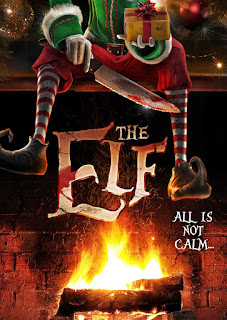 If you look at the promotional artwork for The Elf and expect a merry slashing romp akin to Jack Frost, you'll be as disappointed as I was in the film.  Though the titular character does strike an Elf on a Shelf pose in one scene, this uneven indie production seems more interested in being a psychological thriller more akin to Psycho.  Which would have been fine, as I was getting interested in this unexpected story line, until the moments that seem to have migrated into the film from the cheesy movie promised by the poster deflated the tension and mystery build up earlier.

After a rather unnecessary opening involving a toymaker sewing the lips of a young boy shut, the film opens in present day as Nick (Gabriel Miller) visits the toy store he inherited in his hometown.  Well, it's more of a flea market, with plenty of old furniture and nicknacks, but as this is a low budget indie production, it's understandable if the production has to work with whatever location they can find.

Anyway, Nick opens a mysterious locked chest (NEVER a good thing) and, as snow falls around him, he finds the Elf and the curse surrounding it.  Yep, this stuffed doll takes out the ones on its naughty list, and that one name can be removed, sparing the victim.  And, as you might expect, after he reads the scroll, the Elf, and the snow, vanishes.

After he and his girlfriend Victoria (Natassia Halabi) head to the family home, they find the Elf on a shelf, looking down on them.  Surprise! 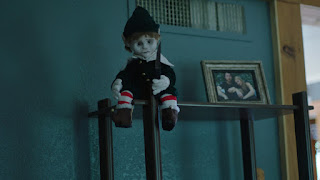 I see you when you're sleeping...
That should be enough to creep you out enough.

Nick isn't a fan of Christmas, due to a past childhood event that ended in multiple deaths.  But Victoria has invited her family to the house, in an attempt to install some holiday cheer into Nick.  As you might expect, mayhem ensues.

Okay, that's the basics of the story.  And I have to say, I was enjoying the film up until the first victims meet their demise.  Because, up until this point, all the interactions with the Elf were filmed in a manner that cast suspicion on Nick.  He was alone with the Elf at the toy shop, and Victoria doesn't notice the Elf sitting on the shelf until Nick points it out to her, allowing for the possibility that Nick set it up there.  Miller was giving a pretty good performance, looking like a man just hanging onto his sanity, and Halabi was fine as his concerned fiancee.  And when the family showed up, I was expecting a couple more unexplained Elf moments, this time around some dead bodies, before Nick goes full Torrance.

Such an approach could have worked.  Given the budget constraints, director Justin Price delivered a pretty well shot film, and showed a deft hand hand at staging the early scenes to make the audience suspect Nick.  But screenwriter Price should have given the script another rewrite, as it falters at this point and becomes a rather confused mess, unsure if it should continue on it's path or embrace the cheesy side.

The problems start with the first deaths, as the victims find the Elf in the back seat of their car before they are dispatched.  Oh, and the Elf moves, so all the suspense generated by not knowing if Nick is crazy or not is wasted.  And once this happens, it sends the film into a spiral from which it can't recover.

Further complicating the problem is the fact that the search party looking for the victims head straight into the woods surrounding the house, not the car parked in the freaking driveway!  Even though the scene does further the plot, and gives us more details on Nick's past, sending the pair into the woods before searching the most obvious location first makes you wonder if they'd drank too much spiked eggnog. 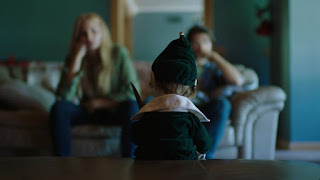 So, should we burn the creepy doll with a knife?
Nah, let's just lock it in a garbage can.  It will be fine.

Adding to the script's misfires are the carolers who appear at the house.  Fine, except for two points.  First, earlier in the film, Nick wants to leave the town, but it appears a massive snowstorm has shut down the local airport.  Okay, all the exterior scenes have snow in them, but certainly not the oppressive amount needed to shut down an airport.  We never see even a hint of the storm discussed, but I was willing to let that one go.  After all, faking a  snowstorm was probably not in the budget.  But you shouldn't expect the audience to believe a group of carolers would drive to an isolated house just to sing a few songs during a snowstorm that's closed an airport.  Suspension of disbelief is a delicate thing to maintain, and stretching it too far will make the audience start counting all the holes in your plot.

But the bigger issue is how the singers are killed.  Most are strangled by a string of Christmas lights that appear to take on a life of their own.  Sure, it might have been on behalf of the Elf, I guess, but it's never made clear that the creature caused it, and never comes up again.  Seriously, I'm sure the CGI work was expensive, but having a moment where we see the Elf manipulate the lights by simply waving its hands would have helped the film.

Even worse, the witnesses within the house aren't freaked out by watching several people being strangled by animated lights.  It's like they shrug their shoulders, mutter something like, "You don't see that every day," and continue on, with no regard that some supernatural being might be hunting them.

That, and a later victim gift wrapped alive without any explanation why the Elf abandoned his normal habit of slashing victims, amplifies the problems with this film.  It would be fine if the Elf was killing everyone with a holiday twist, but the film doesn't give into the inner cheesiness with those deaths.  It was as if Price knew he needed to have some show stopping deaths to sell the film, but he didn't allow the script to give into the silliness it needed to make such a transition work. 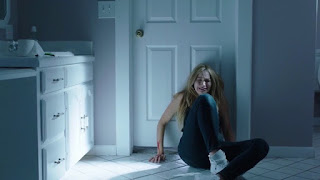 Damn it, why aren't I safe in the bathroom?
Oh yeah, this film has become a silly slasher flick.
Should have noticed the tone change earlier.

Look, lots of bad holiday horror films work, as long as they embrace the stupidity of their plot.  But by generating a different vibe in the first half, without embracing the cheesy goofiness of the a doll dispatching victims in a twisted holiday theme, The Elf fails to live up to the promise of the first half, and not delivering once the mayhem ensues.

And that leads to a bigger problem with the basic premise, at least for me.  Come on, it's a freaking doll.  Sure, it's possessed by a demon and can hide in unexpected places, but it's basic modus operandi is to stab people to death.  Once a character is faced with a stuffed doll trying to stab them, all they have to do is contain them the stupid thing, rip off its arms and toss it in the fire.  Sure, it might be possessed by a demon, but it can't do much once its vessel is destroyed.

Or maybe it can.  That would make for an interesting climax The Elf ignored.

And once the movie introduces a final plot twist, which does explain a few things, it's too sudden and, even worse, makes little sense.  The story attempts a "gotcha" moment without any setup or explaining why other characters went along with it, as they would know they were facing a murderous doll.  And why they didn't take precautions against it is the final nail in the coffin for this film.

Had Price either gone full out cheesy, or kept the mystery concerning the identity of the killer hidden for a bit longer, the film might have been an enjoyable holiday romp.  Instead, toss The Elf on your Yule Log and watch the sucker burn.  It will be more entertaining than the film. 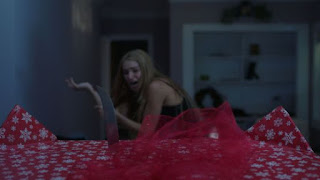 Yeah, this sums up the film.
A bright, shiny package that stabs you in the end.
I should have seen it coming.

Posted by Chris McMillan at 5:13 PM