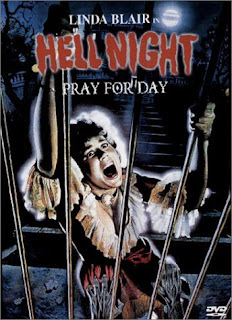 Pray for the end of this film is the more apt tagline.  Coming on the heels of Halloween and Friday the 13th, Hell Night fails to generate any suspense or gore, resulting in a dull, overly long slasher film.

The film takes place during Hell Night at a college, as four pledges (including Linda Blair and Vincent Van Pattern) are locked into a mansion with a horrid history (including mutant births and murder) as part of their initiation.  Of course, the frat president and his flunkies plan to scare the pledges with some lame haunted house antics, but everyone soon discovers that someone living in the house doesn’t tolerate unexpected guests.

As with most slasher films, you don’t expect much in the way of plot, just an isolated location with enough victims to keep the kills coming on a regular basis.  But director Tom DeSimone and writer Randy Feldman can’t stop messing up this simplest formula, as their film ends up wasting over 100 minutes with pointless character development, stupid scares and endless scenes of people moving down assorted hallways, garden paths and tunnels.

The ways this duo are able to bungle the slasher formula are surprising.  For starts, the body count is incredible low.  Sure, Halloween only had four onscreen deaths, but that film had style and atmosphere.  As the slasher genre got into full swing, most films made up for such shortcoming by including more frequent and violent deaths.  But DeSimone and Feldman missed that memo.  To be fair, the first kill is a spectacular beheading (possibly trimmed for the MPAA), but the mayhem devolves as the film goes on, until the deaths take place off screen.  Not a smart movie for a fillm released more than a year after the original Friday the 13th.

But the filmmaker’s most egregious error involves Linda Blair’s portrayal of the worst Final Girl ever filmed.  It’s easy to criticize Blair for this one, as she’s not a good actor (her performance earned her the Golden Raspberry Award for Worst Actress that year), yet no other actor could have done any better.  The script forces Blair to whine, shriek and hide behind her potential romantic interest for over 90 minutes, before she is forced to stand up to the killer.  Yet even than, shear luck is the predetermining factor in her survival, as she “takes out” the killer while screaming in a car that must be on autopilot, as Blair’s hands are everywhere but on the steering wheel.  It feels screenwriter Feldman fashioned his character after a heroine from a 50s horror movie, and only bothered to try and create a Final Girl in the script’s last pages.

Trimming about 15 to 20 minutes off the running time might have helped by tightening things up.  Yet editor Anthony DiMarco (using the name Tony Di Marco, a pseudonym common to his work in less “prestigious” films like Chained Heat and The Giant Claw) appears to have been content to just paste scenes together using as much footage as possible.  Or maybe director DeSimone wouldn’t allow any of his footage to end up on the cutting room floor.  Either way, the film lurches between some fairly suspenseful scenes and long, tedious moments that destroy any suspense generated earlier in the film.

I could go on, but Hell Night took up enough of my life.  Unless you need to see Blair’s heaving bosom filling out a dress more suited for a gothic Hammer tale, this film is the cinematic equivalent of a razor blade filled apple in a slasher fan’s trick or treat bag, and should to be avoided at all costs.

Posted by Chris McMillan at 6:51 PM No comments: