Although FD3 was intended to be the last film in the franchise, the open ending allowed producer Craig Perry and New Line Cinema to greenlite a fourth installment, based on a script by FD2 writer Eric Bress.  David Wong was approached to direct, but passed due to a scheduling conflict.  The studio approached another veteran of the series, FD2 director David E. Ellis, to helm the franchise’s first 3D entry, The Final Destination.

The script breaks no new ground, suggesting New Line was sold on the spectacular elements of the script.  So, rather than adding any depth to the series, the film rehashes the same elements of the previous films.  And while the onscreen mayhem is impressive, the script contains glaring plot holes that contradict the previous films, to a point that fans might lose any suspension of disbelief, if they’d been paying attention to the story and seen this as a crass attempt to cash in on the current 3D craze. 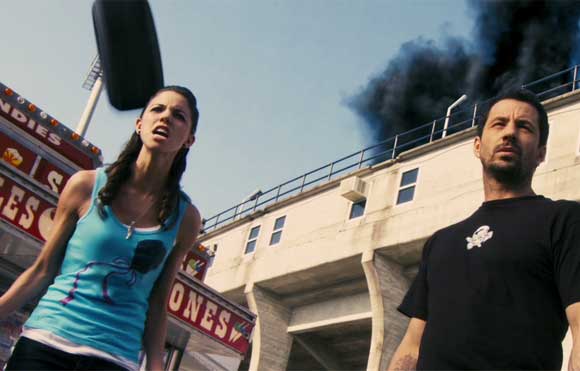 The film starts off as a group of friends sit at a NASCAR-style racetrack and, as expected, one of them experiences a premonition of an upcoming crash that will result in their deaths.  To the surprise of no one in the audience, the person freaks out, which results in several victims leaving the site of the accident.  But, as we all know, Death hates when Its plan is disrupted, so the victims are slowly claimed in rather gruesome manners.

As expected, the plot follows the expectations established earlier in the franchise.  But, in reaching for bigger thrills, this film damages the continuity established (admittedly on rather shaky legs) in the previous films.

Though, to be honest, this was pretty awesome

First off, the accident in the racetrack feels like a retread from Ellis’ earlier entry in the franchise.  But the overabundant use of CGI effects is a problem.  One could excuse the digital effects in a 3D movie, where the audience expects to have blood and gore thrown in their faces, but the CGI deaths don’t look good, especially in 2D.

Another problem with the script is that all the characters are simple stereotypes, designed to forego any attempt at character development and allow the filmmakers to focus on the gore and mayhem.  It might work, if the death sequences came off as original and inventive.  But the film delivers a death that rips off the opening chapter of Chuck Palahniuk’s Haunted, a racist getting his just send off and a nice Rube Goodstein build up to a death that resolves in a simple moment that leaves the audience wondering why the film contains such a build up for a lame payoff.

What, you mean I've spend all this time sitting on this drain for a rip off moment?!?

Okay, now we get into SPOILER TERRITORY.  I will spoil the conclusion of this movie, as well as the previous entries, as the script contains several inconsistencies that can’t be discussed without giving away the ending.  I assume, if you’ve read this far, you’ve seen the films, but it not, you’ve been warned to stop reading here.

The death scenes are pretty mundane, with a few graphic moments to appease horror fans, but midway through the film, the script starts disrupt the mythos set up earlier in the franchise.  First up is when the man with the vision, Nick (Bobby Campo) and his girlfriend Lori (Shantel VanSanten) interrupt the suicide attempts of racetrack security officer George (Mykelti Williamson), who decided to end his life on his own terms.  But, as it’s not his time according to Death’s ultimate plan, his attempts continue to fail.  He vomits out the pills he ingested, his gun won’t fire and his attempt at hanging himself is interrupted by our heroes.

But, it also calls into doubt Kimberly’s death (and resurrection) in the second film.  If we follow the logic forced upon the franchise now, Kimberly would be sitting at the bottom of a lake in the van, unable to drown, as Death isn’t ready for her.  And though the script in FD2 introduces some question as to the order of the survivor’s demise, such a plot point needs to be addressed.

An even bigger problem with the script occurs when Nick figures out that another victim, one he didn’t realize was alive, is next on the list, thus causing George’s failed suicide attempts.  At one point, he experiences another premonition where a movie theater, and most of the upper level of a mall, is destroyed in a cataclysmic explosion.  As his vision shows that any attempt to clear the theater will result in Lori’s death, Nick rushes into the construction site and, despite some considerable obstacles, prevents the explosion and save countless lives.

You know, dying here would be so much easier than dealing with Death's wrath with avoiding It's plan

Aside from the fact that nail guns will not fire nails like a lethal projectile, this sequence destroys everything set up in the previous films.  While it appears this is part of Death’s plan to lead Nick, Lori and one last survivor into a coffee shop, Nick’s premonition saves countless lives, both in the theater and the upper level of the mall.  According to the mythos established in the earlier films, by preventing all these deaths, Nick created a new list of victims for Death to take out.

It’s hard not to miss this plot hole if you’re a fan of the franchise.  But toss in some shabby CGI deaths, and a few repeat deaths from the earlier films, and this film is a subpar entry attempting to cash in on the 3D craze, rather than build upon the original films.

Of course, as this was the highest grossing film of the series, another entry was inevitable.  So board the bus and get ready for a shaky ride that delivers the goods, but adds a few more holes to the bridge connecting the series.
Posted by Chris McMillan at 7:34 PM 2 comments: