I'm heading for The Living Dead Horror Convention! You should be TOO!!!!

Yep, I'm on my way to The Living Dead Horror Convention in Portland, OR, once I get this update posted.  I'm looking forward to meeting old friends, making new ones, and maybe snagging an autograph or two.  And, most importantly, HAVING A BLAST!  Look for me, I'll be the tall bald guy wearing the volunteer tee shirt and the black kilt!  Stop by and say HI!

If you're wondering, yes, tickets are still available, and you'll find more details below!

The Living Dead Horror Convention happens at the Oregon Convention Center in Portland, OR, this weekend.  The first horror convention in the Portland area, the festival features Julie Adams (Creature from the Black Lagoon), Barbara Steele (The Pit and the Pendulum, Black Sunday), Adrienne King and Ari Lehman from the original Friday the 13th, cast members from Twin Peaks, director Fred Olen Ray (Hollywood Chainsaw Hookers, Beverly Hills Vamp, Evil Toons) and so much more.  Tickets are STILL AVAILABLE, so don't miss out on all the spooky fun!!  Visit the official website and Facebook Event Page for more details. 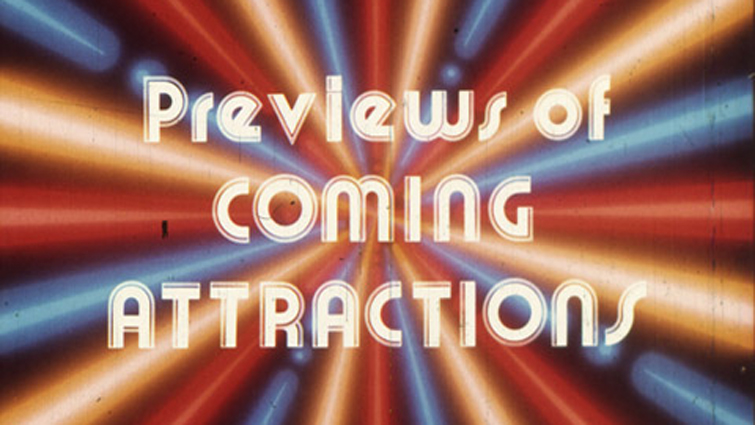 If you're in Olympia, WA, and can't make it down to The Living Dead Horror Convention tonight, head to the Capitol Theater (206 5th Ave SE), as The Olympic Film Society presents Trailer Apocalypse!  Presented in GLORIOUS 35mm, this 90 minute collection of classic exploitation trailers (curated by Bob Murawski, of Grindhouse Releasing fame) will MELT YOUR MIND!  The show starts at 10:15 pm.  Visit The Olympic Film Society website for more details. 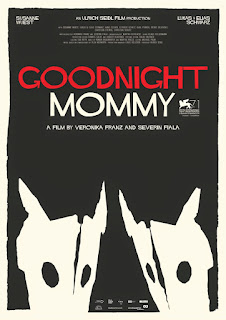 Good Night Mommy, opens at The Laurelhurst Theater and Pub (2735 E Burnside St) in Portland, OR, tonight.  As a pair of twin brothers greet their mother after cosmetic surgery, the suspect the woman entering their home is their true parent.  And, as expect, things start to go bad from there.  This screening is for those 21 or older only.  Visit The Laurelhust Theater website for more details. I don't know if you can call Turbo Kid a movie, but more an homage to all the things that made the 80s action films so cool.  Playing tonight at 8:30 pm at The Capitol Theater (206 5th Ave SE) in Olympia, WA, the film follows a young boy on a BMX taking on a water hording warlord in a post-apocalypse setting, it's campy, colorful and great fun.  Visit The Olympic Film Society website for more details.

Part of The Living Dead Horror Convention, The Hollywood Theatre (4122 NE Sandy Blvd) in Portland, OR, is screening Texas Chainsaw Massacre with cast members Ed Neal (The Hitchhiker), Teri McMinn (Pam) and John Dugan (Grandfather) in attendance!  Look, you probably know and love this film, if you're reading this blog, so you know how AWESOME this event will be.  Advance tickets are $10 for the 6;45 pm screening, and can be purchased at The Hollywood Theatre website.

The Pickford Film Center (1318 Bay St) in Bellingham, WA, in conjunction with Rocket Donuts, presents Queen of Blood today at noon.  Starring John Saxon and Basil Rathbone, this futuristic (the year is 1990) horror film is comprised of footage from the Soviet sci fi film Planet of Storms.  Here's hoping this attempt to Americanize a Soviet film works out better than Planet of the Prehistoric Women!  For more details and advance ticket sales, visit the link. 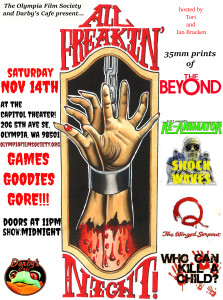 Oh my, Olympia, WA, Horror Fans, The Olympic Film Society has a line up of classic horror films in GLORIOUS 35mm that will keep you up All Freakin' Night!  This as awesome lineup, with The Beyond, Q: The Winged Serpent, Shock Waves, Who Can Kill A Child, and Re-Animator.  Oh, and all are in GLORIOUS 35mm (yeah, I know I mentioned that earlier, but it is worth repeating).  Presented by Darby's Cafe (seriously, if you ever go to Olympia, stop by and support the place just for the awesome films they are sponsoring this year), the show starts at midnight at The Capitol Theater (206 5th Ave SE) in Olympia, WA.  You can buy online tickets until 8:30 Saturday, November 14.  If you miss out, tickets will be available (while they last) at the box office starting at 10 pm.  Find out more at The Olympic Film Society website.

Weird Wednesday returns to The Joy Cinema and Pub (11959 SW Pacific Highway) in Tigard, OR, with Hollywood's FIRST ZOMBIE MOVIE, the classic White Zombie, starring Bela Lugosi!  Yeah, I don't need to say anymore.  Admission to the 9:15 pm show is free, so spend some extra bucks at the snack bar!  And, as always, you must be 21 or older to attend.

It takes all sort of critters to make Farmer Vincent's fritters.  And we aren't talking roadkill here, folks, unless you're talking people ran off the road and.....   Oh hell, I'm not giving it away.  Just head to the Blue Mouse Theater (2611 N Proctor St) in Tacoma, WA, as Friday Night Frights presents a screening of the meat lovers classic Motel Hell.  This dark comedy horror film is under-appreciated even to this day, but the dark humor and horrific images are sure to win you over.  The show starts at 10 pm and tickets are only $5.  If you haven't seen this one, you need to check it out.  Visit the Facebook Event Page for more details. I Am Thor, the documentary of a heavy metal artists rise, fall and rebirth, screens at The Hollywood Theatre (4122 NE Sandy Blvd) in Portland, OR, tonight at 9:30 pm.  I'm including this on the Horror Calendar as Thor also starred in the camp classic Rock n' Roll Nightmare (seriously, you NEED TO SEE THIS, as it is spectacular cheesy fun) and Zombie Nightmare.  And, his appearance at The Hollywood Theatre a few years ago was AWESOME!  Advance tickets for the 9:30 pm showing, and more details on the film and Thor's career, are available at The Hollywood Theatre website.

Remember, if you want your event added to The Horror Calendar and mentioned the Weekly Update posts, email me at shadowoverportland@live.com with all the details.  And, should you attend any of the events listed above, let the organizers know you read about it at The Shadow Over Portland!!
Posted by Chris McMillan at 3:10 PM No comments: