In 1968, George Romero changed the cinematic zombie forever.  Night of the Living Dead disassociated the undead from their voodoo roots, making them flesh eating corpses created by an unknown force.  And though a few films maintained the zombie’s traditional origins during the 70s, the release of Dawn of the Dead buried the voodoo element under a cinematic spilling of blood and intestines.

One of the tradition zombie films released between Night and Dawn was 1974’s Sugar Hill, a successful mix of traditional horror and blacksploitation elements from AIP (following the earlier Blacula and Scream, Blacula, Scream).  But viewers expecting a level of social commentary akin to Romero’s works will be disappointed.  Other than the basic blacksploitation trappings, Sugar Hill is little more than a simple revenge story wrapped in horror trappings.  But the film works thanks to a plot that transcends the racial turmoil of the time, a good cast, some creepy moments and surprisingly good zombie makeup.

The film opens at The Haitian nightclub.  Langston (Larry Don Johnson), the club’s owner, is being pressured to sell out to local gangster Morgan (Robert Quarry).  As Langston is steadfast in his refusal to sell, Morgan’s men beat him to death. 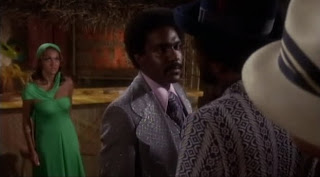 Langston’s girlfriend, Diana “Sugar” Hill, (Marki Bey), isn’t content to wait for the police to build a case against Morgan and his men.  Summoning voodoo lord of the dead Baron Samedi (Don Pedro Colley), she gains a zombie army and goes on a murderous rampage, dispatching the gang members before moving up to Morgan and his racist girlfriend.

As a blacksploitation film, Sugar Hill contains elements that could offend modern viewers.  Morgan and those around him drop the N-word with a shocking casualness, but one has to remember such attitudes were openly expressed with such language only a few decades ago.  And while Morgan is a surrogate figure for the white establishment that maintained a position of superiority through racial discrimination, the fact that his attitudes don't seem so outdated today is a bit depressing.  Perhaps such views are hidden from the public eye, but a quick tour of the Internet will show just how little some people have changed since the 70s.

But let's get back to the film, and Bey’s changing hairstyle.  Some might consider this a continuity error at first, but her appearance is another bit of political subtext in the film.  When we are first introduced to Sugar, and in all her dealings with “acceptable” (white) society, her hair is a shellacked helmet, designed to help her fit into a culture that would ostracize her.  Yet, once she unleashes her zombie army, the helmet is discarded.  Her Afro becomes a declaration against the white establishment that oppresses her.  It’s not subtle by any means, but quite effective.

Well, if I'm about to be fed to hungry pigs, I imagine this might be
a more pleasant final image than Anthony Hopkins glaring at me.

But any examination of racial tensions is of secondary importance to the filmmakers.  And were the blacksploitation elements removed from the script, Sugar Hill would still work as a basic revenge flick.  Given the ease in which a modern audience could empathize with Sugar's desire to avenge her love's death, I’m surprised this film continues to be overlooked by many horror fans.  Despite the limitations of the budget, and of visual effects at the time, Sugar Hill is one of the better non-Romero-style zombie movies made and deserves a bigger fan base.

While the cast is fine, Colley’s performance as Baron Somedi is terrific.  While the character is a bit over the top most of the time, but one scene stands out.  The Baron watches one of Morgan’s men threaten a street fruit seller, and the expression of dismay and anger on Somedi's face is amazing.  And it gives credence to the film’s conclusion, as The Baron accepts a lesser payment than expected for his services.  This scene, which could be easy to overlook, solidifies the idea that Somedi's motivations for helping Sugar changed as he witnessed the intolerance practiced by Morgan and his men.

But damn, his less subtle moments are such fun to watch

As for the zombies, the design is rather simple, consisting of some body paint supplemented by cobwebs and reflective, bulging eyes.  But damn, is it effective.  At times, these zombies are creepier and more menacing than the ones in Romero’s first film.  Their blank, glowing eyes and ghastly grins work just as well as the gapping jaws of a flesh hungry zombie, even now.

Okay they aren't going to eat you, bet it doesn't make you feel any less
CREEPED OUT!

You can purchase the film through the Warner Achieves website as a DVD-R, and the picture and sound quality is quite good.  Don’t expect any extra features, as this is standard for DVD on demand releases.  Still, I was disappointed with the cover art.  Rather than the awesome movie poster (see the top of this post), we’re given a rather bland picture of Sugar and Mama Maitresse, with no trace of zombies at all.  It makes the film look more like a drama than a horror film, which is a mistake when trying to generate interest in a film that lacks a large fan base.  I assume this eliminated the need to pay royalties to the poster artist, but that’s a shame, as a simple change in the cover art would draw viewers unfamiliar with this film. 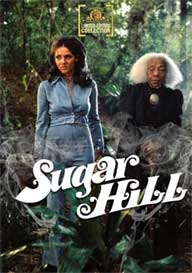 Yea, that's the DVD-R cover.  Don't judge the movie by it.

Regardless of the cover art, you should check out Sugar Hill.  The film holds up because, at its core, it’s a simple revenge flick.  Racial context aside, any modern viewer will understand Sugar’s motivation and have no problem cheering for her vengeful murder spree.  Toss in some creepy looking zombies and a maniacal Lord of the Dead, and it’s a film every horror fan will enjoy.
Posted by Chris McMillan at 4:07 PM No comments: