Most horror fans might consider Ghostbusters the best horror comedy ever filmed.  Though one cannot deny it’s a great movie, I suggest fans check out Abbott and Costello Meet Frankenstein and see if it knocks the modern, effects drenched film from their top slot.

This film features the classic The Universal Monsters, as the comedy duo face not only the Frankenstein’s Monster (Glenn Strange), but also The Wolf Man (Lon Chaney Jr.) and Dracula (Bela Lugosi, in his second, and final, appearance as Dracula).  That’s a classic line up, topped only by The Monster Squad.  And, like most classic comedies, the humor still works.  It might be considered tame and dated compared to modern horror comedies, but the film moves at a brisk pace and contains enough double entendres to keep fans of more adult humor happy.

How can you not love such a line up of classic monsters?

The film opens as Larry Talbot is trying to reach a shipping company in Florida.  Talbot has been on the trail of Dracula, who plans to revive the Frankenstein’s monster for some nefarious reason. Dracula's plot is never explained, but it doesn’t matter.

Talbot has the misfortune of talking to Wilbur (Costello), who works at the shipping company with his friend Chick (Abbott).  Or perhaps frenemy is a better turn, as Chick berates and smacks Wilbur every few minutes.  Anyway, Talbot tries to divert a shipment to McDougal’s House of Horrors, but the full moon rises and he becomes the Wolf Man before persuading Wilbur to prevent the deliver.

Wilbur and Chick deliver the crates containing the coffin (and body) of Dracula and the inanimate body of The Monster during a dark and stormy night (Yea, like you were expect otherwise).  Dracula revives the weakened Monster and the two walk out of the building, leaving Wilbur to try and convince McDougal and the police that the exhibits left on their own accord.

I SO want a blooper reel for this film!

No one believes Wilbur, so he and Chick are arrested for the theft of McDougal’s exhibits.  The two are bailed out by a woman they assumed to be Wilbur’s girlfriend, Sandra (Lénore Aubert).  But insurance investigator Joan Raymond (Jane Randolph) is the one responsible for getting them out of jail, and plans to charm Wilbur into telling her what happened to the exhibits.

As expected, Sandra is working with Dracula and plans to transplant Wilbur’s brain into The Monster’s body, making it more susceptible to Dracula’s hypnotic power.  In the meantime, Talbot arrives in Florida, but his attempts to find Dracula are thwarted by the full moon.  It all culminates in a monster battle at a spooky castle that happens to be located in a Florida swamp.

The castle looked so big on the outside, yet in every hallway,
there's The Monster!

Yes, the plot is crammed full of troupes from previous Universal horror films and the early slapstick routines are pretty bad.  But one the monsters show up, the film is terrific.  Abbott and Costello’s comedy routines are perfect once the film discards the physical humor for some witty wordplay.  Wilbur’s antics are still wonderful, echoing the upcoming antics of Shaggy and Scooby at their best.  Chick’s disbelief in two beautiful women vying for Wilbur’s affections leads to some great one-liners for the adult members of the audience.  And that doesn’t include Talbot trying to explain how he will become a wolf later that evening, and Wilbur commenting, “You and twenty million other guys.”  It’s not sophisticated, but such comedy moments hit the mark more often than miss.

At the other end of the spectrum, Chaney, Lugosi and Strange all deliver in their roles.  It’s terrific to see Lugosi get the chance to be Dracula once again, and Chaney is as tortured as ever.  Strange only gets to lumber about as The Monster, but his stature is quite imposing and very menacing during the final act.

And Strange even popped Costello a good one in this scene.
Yep, comedy is hard, and sometimes painful.

Unlike later Abbott and Costello Meet… features, the monsters are treated as serious threats, adding to the film’s charm.  Okay, the Wolf Man is played as a bit of a buffoon as he stalks Wilbur through the woods late in the second act, but it’s a slight lapse made for the sake of the plot.  In every other scene, the monsters are treated as respectable threats to the characters, despite Abbott and Costello’s comedy antics infused into the spooky moments.  The balance works, even though the audience knows the two buffoons will make it to the ending credits, while the monsters will perish (for the moment).  And be sure to keep an ear out, as another Universal Monster makes a guest appearance in the final scene.  It’s a great cameo (dis)appearance.

Despite the dated material, Abbott and Costello Meet Frankenstein is a sad comment on the state of current horror comedies.   Though the film is pretty childish at times, it’s nice to laugh at some wacky antics around scary monsters and settings, rather than a barrage of flatulence jokes.  Like The Ghost and Mr. Chicken, this film is another example that the art of writing good horror comedies has become lost to modern Hollywood. 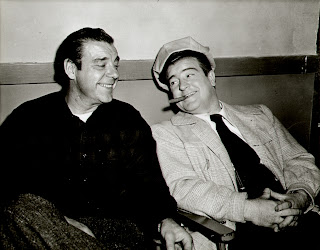 Damn right, our movie is better than the entire Scary Movie franchise!

Posted by Chris McMillan at 5:20 PM No comments: