Shark Attack in the Mediterranean (2004) 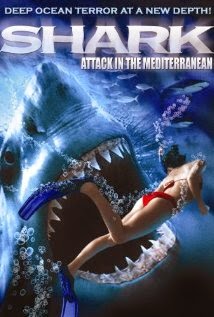 Okay, I thought I was done with the shark attack movie reviews, but I picked up this DVD and had to share the cheesy goodness.  A German television production known as Hai-Alarm auf Mallorca and Shark Alarm, this film fits into the so bad it’s awesome category of shark attack films.  You might still find the dubbed DVD version around and, if you love cheesy shark flicks, just buy it.  You’ll thank me later.

The film opens as Sven Hansen (German bodybuilder turned actor Ralf Moeller) is reconsidering his life in the island of Mallorca.  His wife was attacked and killed by a shark, and he feels the need to leave in order to help alleviate his grief.

Hanging onto his job as a helicopter pilot, he picks up marine biologist Julia Bennett (Julia Stinshoff), heading for her new job at a shark research facility on the island.  Their flight to Mallorca is interrupted by a distress call from a boat that lowers tourists in a cage to view the sharks that call the island home.  The captain, in a display of sheer stupidity dictated by the script, trapped several tourists in shark infested waters by trying to relocate the boat without bringing up the shark cage.  Sven and Julia rescue the tourist, but Sven’s not happy to find that his daughter Maja (Oona-Deva Liebich) is part of the crew.

Upon their rescue, the tourists report that something big came out of the local trench and scared the other sharks away.  Soon, people start dying and Sven is convinced the shark that killed his wife is back, bigger and badder than before.

And, as expected, Sven is right.  The institute’s head doctor, Verena Bandauer (Katy Karrenbauer), is hiding the fact that a megalodon escaped its pen and killing Sven’s wife before disappearing into the trench.  Now it’s back, full grown and ready to unleash itself on the population of Mallorca.
Toss in Maja disobeying her father by taking part in a jet-ski competition and a cover up involving the local authorities, and you can just sit back and you know that mayhem will ensue. 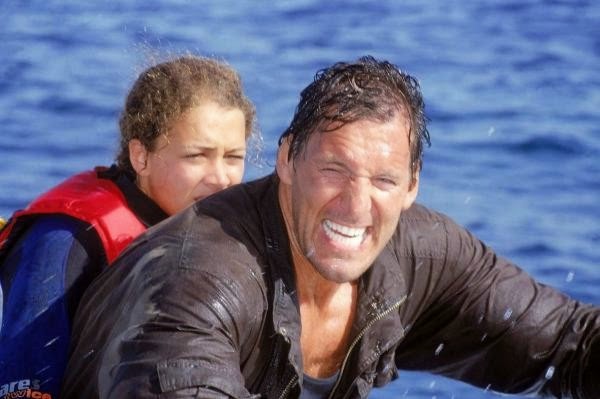 I told you I was right!

I should warn you, the shark attacks is minimal, with most of the onscreen mayhem confined to the final act.  This shouldn’t be a surprise, as the film was a TV production, but the script makes up for the lack of megalodon action with lots of fun little action sequences and amazing (and possibly unintentional) campy bits that manage to keep your interest.

For example, the institution is willing to kill Sven to keep him from pressing about the shark.  So we get the moment when Sven is run off the road by a truck, leading to an amazing WTF moment, as Sven jumps out of his jeep midair after he’s run off a cliff.  The moment is crazy enough, but add in scenes of some nameless rich dude explaining to a bevy of bikini-clad women how to properly cook meat on a grill, and how a true grillmaster doesn’t fall from the sky, makes the moment Sven drops into the pool, while his jeep explodes behind everyone more enjoyable than it should be. 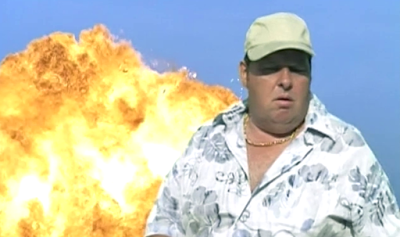 I don't notice the fireball behind me, as I'm
so enthralled by Sven.

The rich guy returns later in the film, as Sven has to borrow another of his cars.  As expected, the rich guy submits to Sven’s masculinity and admits, “I suppose I can’t stop you.”  Seriously, the scriptwriters (Jorg Alberts, Roland Heep, Frank Koopmann and Don Schubert) deserve some recognition for that moment if the dubbed version is even close to the original script.  The scene is played so seriously that one can’t help but laugh.

Yes, the film is dubbed, but the voice actors are as serious as the actors on screen, which adds to the camp factor.  And I have to mention that the film contains a rather satisfactory ending for a character working with the nefarious institution.

Adding to the craziness is a scene with German pop star Jeanette Biedermann, as a band member at the big jet-ski competition, performing a song with the chorus, “Hey, hey, hey, do the 69!”  I don’t jet-ski, so I wondered if this was a mix of race logo with a racy implication.  Than I saw the cover for her album Break On Through (the song 69 is listed as part of the Platinum edition) and I didn’t even bother trying to look any further into jet-ski terminology. 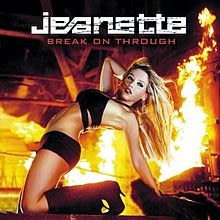 Yeah, that should eliminate any doubts about what the song is about.

Despite the faults, the film manages to be engaging during most of its 93 minute running time.  The pace is fast enough to keep from dragging out too long, and some of the dialog makes more sense when you know the background of the actors.  For example, Moeller was in the running to play the T-1000 in Terminator 2, until the filmmakers decided to go with a skinnier actor to play against Arnold.  So, when Julia mentions to a police officer, “I’ll be back,” before running her car into the station to free Sven, it’s easy to snicker at the moment, rather than feel it’s just a blatant rip-off moment (which, to be honest, it is).

And when the shark finally attacks, the scenes are pretty good.  Okay, the effects fall short at times, as parts of the shark become transparent or the shark’s scale is questionable.  But the attack scenes are well staged, and the effects department was smart enough to create a wake around the shark’s fin, which is more than can be said for some other giant shark movies out there. 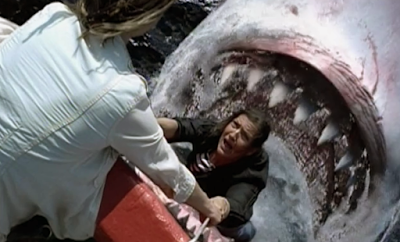 Yeah, the scale and perspective is screwed, but this shot still looks cool.

It’s goofy fun, and worth a look if you can get it.  Whether the cheese was intended or not, Shark Attack in the Mediterranean is one of those perfect rainy Saturday morning movies, when it’s time to curl up on the couch with a blanket and a bowl of sugar-filled cereal and let your inner five year old run wild.
Posted by Chris McMillan at 2:51 PM No comments: