As it was the highest grossing entry to the franchise thus far, no one was surprised to see a follow up to The Final Destination arrived in theaters.  And though screenwriter Eric Heisserer (who penned the remake of Nightmare on Elm Street and the prequel for The Thing) and director Steven Quale (second unit director on Avatar and Titanic) don’t bring anything new to the franchise, Final Destination 5 is a lot of fun, but fails as part of the franchise by changing the rules once again.

The film centers on Sam (Nicholas D’Agosto), who works for a manufacturing company by day, while pursuing his dream of becoming a master French chef at night.  Because of this dual life, his work at the company is slipping, as noted by his supervisor and best friend, Peter (Miles Fisher).  Adding to Sam’s problems is the fact that he is attending a company retreat with his ex-girlfriend Molly (Emma Bell).

Of course, Sam’s life is made even worse once he has a premonition of a bridge collapse that causes the deaths of most everyone on the bus.  Sam awakens from his vision and, following the Final Destination playbook, saves his co-workers from death, at least until they start falling victim to a series of mysterious accidents. 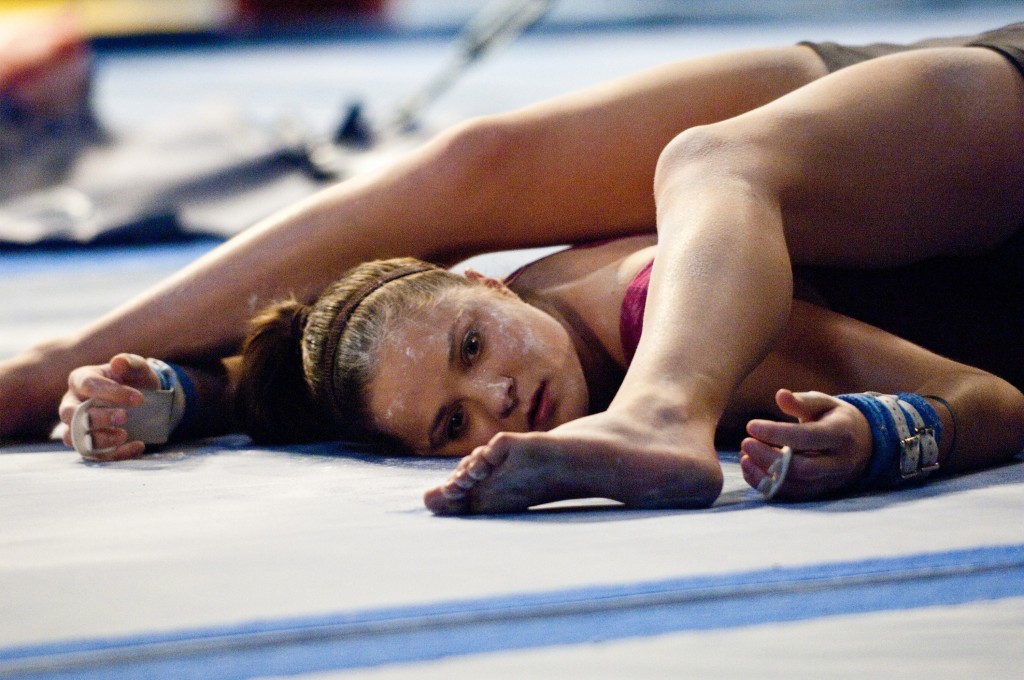 Returning to the franchise is mortician William Bludworth (Tony Todd), who tells Sam and his friends that the only way to cheat Death is to have someone whose death wasn’t part of the plan to take your place.  And this seems to be the solution, as one of Sam’s co-workers is skipped after the death of someone at the plant.  But Sam isn’t willing to murder someone to save himself, although one of his coworkers (one guess who) has no problem deciding that Molly should die in their place.

If you are looking for nothing more than moments of mayhem, FD5 delivers.  The opening disaster is amazing, second only to the opening of FD2, and several of the following deaths are stunning.  As a stand-alone film, it’s damn near perfect.  But once you start thinking about how this story ties into the rest of the franchise, the movie falls apart.

The first problem is the advice Bludworth gives Sam and his friends.  As someone who claims to have knowledge about Death’s ultimate scheme, the mortician seems to have gotten his advice by asking a Magic 8-Ball.  In FD1, he says saving someone on the list will cause Death to skip the next in line, then it’s about saving a “new life” in FD2.  Now he’s talking about killing a stranger.  One could suspect Bludworth is in league with Death, and messing with the survivor’s minds is part of the grand scheme.

Seriously, his track record is worse than most Portland weather forecasters

But a bigger problem occurs during the final few minutes of the film, WHICH I WILL SPOIL.  So, if you haven’t seen the film, skip the next four paragraphs.

Sam and Molly reconcile by the end and both board a Paris-bound, so Sam is able to pursue his culinary aspirations.  But the couple is on the same Flight 180 that started the franchise, dooming them to a fiery death.  Yes, the film revels itself to be a prequel, a nice little twist.

The only problem is Sam saves Molly in his premonition.  So, by the rules set up in the first film, she is not suppose to die and, once you think about it, her death aboard Flight 180 messes with the continuity of the series.  In FD2, Death starts claiming people whose lives were spared by their interactions with the survivors of FD1.  So, if any deviations from the premonitions messes with Death’s design, that would include Molly’s death on Flight 180.  And it means that Death might have to keep people alive, as Molly will not set events in motion that would save their lives.

What do you mean, I'm not in the sequel?  I'm not suppose to die!

Yes, these alterations would be easily overlooked upon a first viewing.  And it’s obvious the main concern with each sequel was to top the previous entry and not create a connecting series of films.  But the continual change in the overall mythology from the first film feels sloppy, and one has to wonder if the series would have a more connected feel had Wong and Morgan been able to work on the first sequel.

Despite my nitpicking, I enjoyed each entry and look forward to the next film in the series.  No, I haven’t heard of a new film yet, but as each entry made New Line Cinema a lot of money, another sequel should be expected.  But rather than following the now time worn formula, I hope the next screenwriter tries to take the franchise in a new direction.   For example, the next film could explore what causes the premonitions.  The idea of another entity trying to disrupt Death’s ultimate plan could inject new life into the series and give fans a twist in the oft-told tale, while delivering the mayhem expected of the series.

Regardless of whether this is the end or not, the one lesson from The Final Destination series appears to be that, if you have a premonition of death, you might consider letting events unfurl as planned.  After all, this franchise suggests that Death will be very upset with such interference and might create a more prolonged, painful death than the one you’d avoid.  And while that’s not true for every character in the series, are you willing to chance it?
Posted by Chris McMillan at 9:36 PM No comments:

After screenings at the Toronto International Film Festival and Fantastic Fest in 2011, director Adam Wingard’s latest horror film, You’re Next, arrived in US cineplexes this weekend.  And while it's better than some of the other genre offerings over the past few years, a weak second half opts to substitute a series of bloody fight scenes for any sense of horror or dread.

The story involves a family gathering in a secluded mansion.  Once the siblings, and their partners, arrive for their parent's anniversary celebration, family dynamics lead to a heated argument over dinner.  But a trio of killer, dressed in black paramilitary garb and white animal masks, interrupt the bickering siblings with a well-planned attack against the family.  But despite their meticulous preparations, the killers didn’t plan on a guest with the skills to make their siege much more complicated.

Sorry, not giving away any spoilers in the photos either

It’s a simple story, but Simon Barrett’s script is very tight.  A veteran of the horror genre  (having worked on Dead Birds, A Horrible Way to Die and segments for The ABCs of Death and V/H/S), he injects a healthy dose of black humor into the script.  Character revelations are reveled during the story, without an over-reliance on expository scenes that would stop the action.  And his script is carful to include actions by certain characters earlier in the film that give future plot twists credibility.

Director Wingard (A Horrible Way to Die, The ABCs of Death and V/H/S) delivers some intense moments during the siege.  The violence is intense, realistic (with one exception late in the film) and quite graphic.  Though the film contains several predictable jump scares, and the killers have moments of precognition that would rival Jason, the film never gets so ludicrous that the audience’s suspension of disbelief is shattered.  And, to be fair, the jump scares are well filmed and downright creepy at times.

The only distraction to Wingard’s work is his tendency to move the camera during most of the film, ranging from subtle bobbing to rather rapid shaking.  The movement is intended to unnerve the audience and never turns into the frantic motion associated with found footage film.  But the appearance of the killers is creepy enough when they emerge from hiding, and the technique feels excessive, unnecessary and rather annoying.  You might wonder if he was sleeping during classes on the use of a tripod.

Stop moving the camera, you're making ME sick!

The cast, which includes horror veteran Barbara Crampton and director/writer Ti West, is also quite good.  Even when a character break the basic rules of surviving a horror movie, the cast sells the moments well, aided by a script that makes their actions feel like something anyone would do in similar circumstances.

But though all the elements for a spectacular horror film are present, You're Next just doesn’t gel.  The problem is the script revels the motivation for the attack, and a major plot twist, too early and drains any sense of suspense and terror out of the film.  Instead, the filmmakers begin to rely on a series of brutal fight scenes to keep the momentum going.  Such a tactic can work in a horror film, as movies like Inside prove.  But, for such scenes to work, the film needs to maintain a sense of horror and dread.  Wingard and Barrett forgot that one ingredient and focus on the bloody action alone.  Once the atmosphere developed earlier is lost, the film's protagonist became little more than an action hero trading blows with a series of villains, not the survivor of a horror film. No, that's not your cat in the window!

And that's too bad, as You’re Next started strong.  But once the filmmakers lost focus on the horror of their tale, the film devolves into a series of action scenes that might be bloody and brutal, but aren't very scary.
Posted by Chris McMillan at 6:24 PM No comments: