The Return of Frightfully Funny Fridays!

Happy Friday the 13th!  And what better day to start up Frightfully Funny Fridays once again!

So, remember, this is the one day to avoid all the fun things in life, like booze, drugs and sex.  And, for god's sake, STAY OUT OF THE WOODS!!

WARNING: This clip contains a bit of graphic violence, so be safe watching it at work.


Posted by Chris McMillan at 8:46 PM No comments:

Ask horror fans about their favorite childhood films and I bet no one would include the Don Knotts comedy, The Ghost and Mr. Chicken as part of their list.  But I assume most horror kids growing up in the 60s probably saw this one and I would suggest checking it out again, as the film works rather well when it stays in the “haunted” house.  And, I suspect, the Saturday morning cartoons you watched back in the 70s got a small bit of inspiration from this dark old house comedy.

The story follows Luther Heggs (Knotts), a typesetter for the small newspaper in Rachel, Kansas.  Luther has dreams of being a reporter and patrols the town at night in search of his big scoop.  He also wants to date the quite fetching Alma (Joan Staley), who’s dating the town’s main reporter, Ollie (Skip Homeier).

Luther takes a major step in realizing his dream when he inserts his own story about the town’s infamous murder house as filler on the paper’s front page.  Dictated by Mr. Kelsey, the papers janitor, Luther writes about the murder/suicide twenty years ago, and the mysterious activity that occurs within the abandoned house ever since.

The story is a hit and George Beckett (Dick Sargent), the paper’s editor, decides that Luther should stay in the house during the 20th anniversary of the deaths and report on the strange events.  Luther is hesitant, but agrees and enters the house just before midnight.

Once the clock strikes twelve, Luther hears strange noises and finds a hidden passageway leading to a room where an organ is playing by itself.  Before racing out of the house, he comes across a painting of Mrs. Simmons, stabbed by a pair of garden shears and dripping blood. 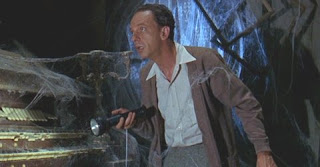 Luther returns to the pressroom in a state of hysteria, but is able to give Ollie and George enough details to allow them to write a story.  Luther gets his break and soon, he’s dating Alma and bathing in the fame bestowed upon him by the town.  At least until he and the paper are sued for libel by the remaining member of the Simmons family, whose plans to bulldoze the house are thwarted by the coverage.

At the trial, Luther is humiliated, and things unravel further once the court reconvenes at the Simmons house later that night.  As no ghostly apparitions appear after midnight, Luther is discredited and ostracized by his supporters.  But once the crowd leaves the scene, Alma finds the mysterious passageway, while Luther hears the organ playing once again and races upstairs to solve the mystery.

Only he doesn’t solve the mystery, or really do anything in the film.  Luther may be the protagonist of this tale, but he’s not the hero.  He is given credit for stories written by others and the mystery of the Simmons house is reveled by another character.  Of course, Luther is in the foreground, strutting about as if he knew everything, which is no surprise, as the movie seems designed for Knotts to bring his Barney Fife character to the big screen (Knotts left The Andy Griffith Show a year before the release of this film).  And the bloated second act, as Knott trying to act the heroic figure and justify everyone’s admiration, re-enforces that the film is centered on Knotts's shtick. 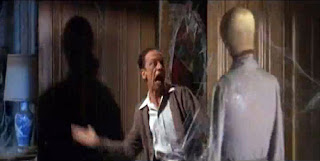 Who needs MMA training when you have mail order Karate classes?

So why am I writing this review, you might ask.  Well, I have a long history with this film, having seen it for the first time at a Florida drive-in when I was five years old.  My parents weren’t fans of horror films, and this was the first spooky movie I remember seeing on the big screen.  And, as my parents wouldn’t let me watch scary movies on television when I was a kid, I think it’s safe to say this was my first Universal “horror” movie.

When my family moved to Portland in the mid 70s, this film was on a yearly rotation schedule on KPTV.  So, on rainy Northwest days, I take the chance to watch anything remotely scary once my parents allowed me to have a small black and white television in my bedroom.  Okay, it wasn’t because they thought I was old enough, but more likely to keep my younger brothers and I from fighting over what to watch during football season.  Either way, the situation worked for me.

Still, like the magic dragon Puff, Mr. Chicken eventually faded from my memory with the advent of VHS and cable.  At least until a few weeks ago, when I spied a used DVD at a local Videorama and decided, in a fit of nostalgia, to purchase it so I could relieve a bit of my childhood.

And I’m glad I did, because once you get past the middle act, the film is a fun little chiller.  The moments in the Simmons house work rather well.  The house looks creepy enough, but the lighting is bright enough, and overly colorful at times, to keep from being too scary.  And the script, for being little more than a Don Knotts family comedy, is pretty smart.  Screenwriters James Fritzell and Everett Greenbaum set everything up in the opening act, delivering clues like a mystery movie that allows the final revel to make sense.  One could watch the opening act after viewing the movie just to see how a few well-placed moments in easily overlooked scenes set up the climax.
The cast is solid, playing the film straight without winking at the camera at any time.  Though Knotts tends to overact at times, the other players are content to play his straight man.  Though a few might seem like extras from Mayberry (little surprise, as Andy Griffith considered extending a haunted house episode from his series into a feature length film prior to Knotts’ departure), they all make the town of Rachel seem real and keep Luther’s antics grounded in the community, rather than outlandish or out of place.

Enough of the Don Knotts acting scared pictures.  Here's another shot of Alma.

Composer Vic Mizzy (who also wrote the themes to The Addams Family and Green Acres, as well as a few other Knotts films) delivers a terrific score for the film that helps sell the spooky happenings.  While the main theme is light and bouncy, Mizzy takes a few bars and play them back during the haunted organ scene to great effect.  Once you hear the score, like Mizzy’s other works, it’s hard to forget it.

Some have suggested through online comments that Mizzy “used” the melody to the song Mr. Ghost goes to Town for the film’s main theme.  And, though a few bars sound similar, I could find no citations supporting such statements.  I suspect Mizzy heard this song at some point, as he and the writers of Mr. Ghost (Will Hudson, Irving Mills and Mitchell Parish) were working in the New York City at the same time.  But to claim it was anything more than an inspiration seems a stretch, as the basic rhythm and feel of his score for The Ghost and Mr. Chicken is in keeping with his later works.

But what struck me most about the movie is how it’s a prolonged Scooby Doo mystery.  A haunting is investigated and a series of scary events happen, all of which are reveled as a hoax after the villain is captured.  Though, in the movie, the “haunting” is to expose a crime, not cover one up.  Still, once the villain is tied to a chair in front of the authorities, you can imagine him shouting how he would have gotten away with it, if it weren’t for that darned reporter.

According to several Internet sites, the inspirations for Scooby Doo, Where Are You? are The Many Loves of Doby Gillis (an interview with the cartoon’s creators and writer support this claim) and I Love a Mystery, a 40s radio drama about three globe-trotting detectives.  And while it’s possible someone involved with CBS or Hanna Barbara remembered that radio show, I suspect The Ghost and Mr. Chicken was more of an inspiration to the creative team at Hanna Barbara.

I cannot support this claim, but it makes sense.  The film opened three years before the cartoon premiered, so it’s possible someone on the Hanna-Barbara team saw the film.  And, as I mentioned above, when striped of the second act, the film is almost a template for the cartoon.  Park the Mystery Machine in front of the Simmons house, add in a projected ghost and you have a Scooby Doo episode.

Yea, tell me you couldn't see Shaggy and Scooby running through the halls of this house.

It might be hard for this film to connect with a modern audience, and not only because of the pace.  Rachel is a bit like Mayberry, with boarding houses, eccentric characters, typewriters and no cell phones.  So if you plan to show this to your kids, be prepared to explain how things were back in the 60s, at least when it comes to “wholesome family films.”

But for older horror fans, this is a nice bit of nostalgia and a reminder that horror comedies can work without dropping to the level of the Scary Movie franchise.  Compared to many horror comedies today, The Ghost and Mr. Chicken is almost a masterpiece.