The Munster kids are coming to Portland this November!

Butch Patrick and Pat Priest, better known as Eddie and Marilyn Munster back in the 60s, are coming to the Living Dead Horror Convention at the Oregon Convention Center in Portland, OR, this November 13 to 15!

Yep, the youngsters of the Munster family will be in Portland, part of a line up that includes Barbara Steele, Adrienne King and Ari Lehman of the original Friday the 13th, Lisa Marie, Lloyd Kaufman, Joe R. Lansdale and more!  Check back at The Shadow Over Portland for more guest announcements, or visit the official website later for more details.

Oh, and the link will lead you to advanced ticket sales, which will save you a few bucks this month.  Early bird specials end on August 31, so get your tickets now!
Posted by Chris McMillan at 4:16 PM No comments: 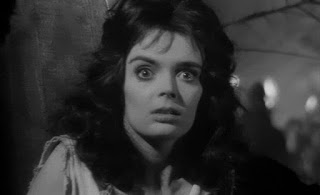 With the release of her first horror film, Black Sunday, Barbara Steele was destined to become a queen of horror.  Sure, she could be the screaming damsel in distress, as in The Horrible Dr. Hitchcock, but when she got to play the villain, few were as good, as terrifying, as Steele.

Her role in Roger Corman's Pit and the Pendulum, as a cheating wife attempting to drive her husband (Vincent Price) insane so she can be with another man, is only overshadowed by Price.  Her gloating as she reduces Price into a quivering mass is only match by the fear in her eyes as she realizes what she has unleashed (aided by Price's wonderful transformation).  She's not on the screen long, but she makes the most of it.  And that final shot still sends chills down my spine when I think of it.  Oh yes, those eyes.... 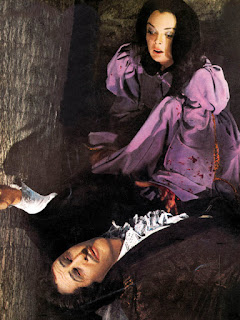 Yes, my plan to drive him mad has succeeded.
What could go wrong now?

Steele other film appearances include The Long Hair of Death, Nightmare Castle, The She Beast, Curse of the Crimson Alter (with Christopher Lee and Boris Karloff), Shivers, Piranha (1978) and the 1991 revival of Dark Shadows.  Recent films include The Butterfly Room, Lost River and the animated short, The Mill at Calder's End.

Oh yeah, those killer eyes!
Posted by Chris McMillan at 7:37 PM No comments: