One can only imagine how difficult it is to make an homage to 50s genre movies.  The filmmaker has to expect modern sensibilities to creep into the story, yet must be kept in check lest the script becomes little more than cliché comparisons to the past.  And walking the fine line between poking fun and delving into outright mockery can become problematic.

Atomic Brain Invasion manages, for the most part, to sidestep these pitfalls.  Part of the reason is director Richard Griffin and co-writer Guy Benoit seemed more concerned with crafting a fun alien invasion film, rather than just delivering a film set in the 50s.  And thanks to their efforts, the film is one fans of the genre, and the casual viewer, will enjoy.

Uh-huh.  Elvis says you have to watch this film.

Despite the simple title, the plot is a bit more complicated than expected.  After a brief introduction to our main cast, an alien canister full of nefarious slime lands on Earth.  The hapless victims exposed to this goo shed their heads and become evil brain aliens, though the effect isn’t as graphic as you might expect.  However, to create a horde of Brain Invaders, the beings puke neon colored slime into the mouth of their victims.  Yea, that’s a bit gross, but just go with it.

Meanwhile, the film’s high-school nerd heroes find a spacecraft containing a trio of aliens demanding to be taken to “the King.”  And, surprise, Elvis is performing in the area, so all these aliens want is to see the King of Rock and Roll.  But the evil aliens want to take Elvis to their home world, so our heroes must protect him while unraveling a government conspiracy concerning a “hidden” nuclear test site.

Yea, no one will notice that

Toss in a greaser hoodlum with an origami fascination and an alcoholic Scotsman (is there any other in such movies?) who might be the victim of an alien abduction, and you’ve got a recipe for disaster.  But the film works, thanks to the goofy script that is more a sweet kiss on the cheek to movies of the past, rather than a harsh slap to the face.

But for this film to work, you have to accept that it occurs on an alternate Earth where equality is more advanced than present day America.  The film’s hero, Sherrman (David Lavaliee Jr.), is an African-American and the fact that he’s in love with the lily-white Betty (Sarah Nicklin) is never questioned by his friends.  The only racial slur, mentioned by the greaser hoodlum, is pretty tame compared to the words used back in the 50s.  Oh, and we have an Asian American student that is thought of fondly by most of the men in town, which would feel out of place for a movie from the era.

I mention this point because one scene during the final act.  And while it’s hard not to appreciate what the filmmakers are saying, the scene stops the film’s momentum and feels like it drags out too long.  Yet, the script kick backs into high gear soon after, thanks to a couple of sudden revelations concerning the Brain Invaders.

Yea, they aren't as smart as they look

And these sudden plot twists work, thanks to a crafty script that sets up everything earlier in the film.  You might not catch every bit upon your first viewing, but it makes a second viewing enjoyable, and I suspect you will want to see this one again.

The cast is terrific, playing up the campiness of the script without turning their performance into a mockery of past genre films.  Lavaliee and Nicklin are perfect as high school students thrust into the roles of heroes, and their moments of hysteria are quite believable. Sherman’s friends (played by Daniel Lee White and Colin Carlton) are fun to watch, as is Michael Reed, Sherman’s antagonist and his rival for Betty’s affections.  And David Erin Wilson’s performance as General Bedfellow is better than one would expect for the character.  He keeps the General from becoming an outright parody of the military characters from the 50s, which one would expect from a modern film playing off 50s stereotypes.

As for the Brain Invaders, the creature effects look great for the budget (and yes, you have to take that into consideration), thanks to some skillful staging.  And though the aliens might seem a bit goofy, their behavior makes sense as the film progresses and allows the audience to believe a group of teenagers could thwart this alien invasion.  That might seem like a strange statement, but wait for the siege on the diner and you’ll get the point. 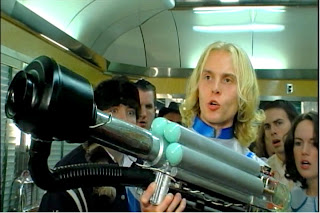 Nope, this has nothing to do with how the siege goes, but the end results are pretty funny.

If you love 50s alien invasion movies, you’ll enjoy Alien Brain Invasion.  And if you’re not familiar with those older films, it doesn’t matter.  The filmmakers capture the spirit of the genre better than most modern homage films, while allowing you to laugh at the troupes of the genre.  It’s a rare balancing act and the filmmakers pull it off, delivering a loving tribute that only pokes fun at a bygone genre, rather than outright mocking it.

My only complaint is the DVD has a rather generic cover, rather than the comic book style cover I used to open my review.  Had that artwork been included, the DVD would be perfect.  But don't let that very minor quibble keep you from watching or, better yet, buying this film.  It's terrific fun and a great movie to share with friends.  Don't pass it up.
Posted by Chris McMillan at 5:36 PM 1 comment: