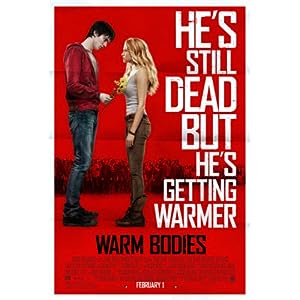 Zombie fans needn’t shun Warm Bodies for fear of the sparkling undead infecting the genre.  Though the film is more romantic comedy than horror film, and not the cross over film some people proclaim it to be, Warm Bodies is a great date film to share with non-horror fan partners.  The movie is quite charming for the most part, and not the travesty suggested by the trailers.

The film opens with R (Nicholas Hoult) shambling about with his fellow zombies in an airport he considers home.  Through his internal monolog, we find that R has fleeting memories of being alive, though he is no longer able to act human.  He tries to have conversations with fellow zombie M (Rob Corddry), but the best they can manage is a series of grunts, unless they are hungry.

R also fears his ultimate fate is to become a “Bony,” zombies that have ripped off their skin and cast away the last vestige of their humanity.  Though R admits he will eat the living, he feels bad about doing so, unlike the Bonies.

Let the I Am Legend jokes commence!

Still, the hunger for flesh is a powerful motivator, and R joins M and a few other zombies as the group leaves the airport to forage for food.  Around the same time, a group of humans leave their walled city in search of medical supplies.  The two groups meet and during the battle, R and Julie (Teresa Palmer) lock eyes.  Julie decides not to fill R’s skull with bullets, and R decides not to eat her.  But he has no qualms against eating the brains of Perry (Dave Franco), Julie’s boyfriend.

Through his internal monolog, R explains that eating Perry’s brain will keep his corpse from becoming a zombie, a fate he wouldn’t wish upon anyone.  But R also gets to experience a partial reconnection to humanity by reliving victim’s memories.  And this makes R fall in love with Julie.

Disguising Julie as a newly reanimated corpse, R takes her back to the airport, where he’s decorated a plane with things that remind him of his humanity.  This includes a pile of vinyl records, allowing the movie to deliver a few musical montages while he rediscovers how to talk and becomes more human than zombie.

All it took was owning an airplane and a decent collection of LPs to score!

Julie is curious about R’s unzombie-like behavior, but that doesn’t keep her from attempting to rejoin her human community.  During her escape, she is surrounded by group of zombies, including M.  But once R steps up to protect her, the zombie horde loses interest in Julie as a food source and let the couple leave the airport.

As the two get closer to the walled city, Julie abandons R, who heads back to the airport.  Before he arrives, R meets up with M and the other zombies that let him and Julie leave.  In some way, R’s feelings of love towards Julie infected them as well and reawakened their humanity.  Seen as a threat to the zombie hierarchy, the Bonies cast the group out and plan to kill Julie and R.

Accessing Perry’s memories, R sneaks into the human compound to warn Julie of the upcoming attack, setting up a conflict between the Bonies, the evolving zombies and the remaining humans, led by Julie’s father, Grigio (John Malkovich).

Yes, it’s a zombified version of Shakespeare’s Romeo and Juliet, complete with the balcony scene.  And as annoying that idea might seem, screenwriter/director Jonathan Levin uses only the basic plot, with enough deviations to keep things interesting.  It’s a refreshing approach when one considers the multiple monster/classic literature rewrites flooding bookstores in recent years.  And while it’s not as original as West Side Story, it works as a charming and inoffensive update much like 10 Things I Hate About You.

It’s unfortunate the familiarity of the tale appears to have prompted Levin to forgo any real character development.  Thanks to his internal monolog, R is the most developed character in the movie.  While M gets a few nice moments, the script never divulges whether he (or the other zombies) has the same intellectual capacity as R.  Malkovich’s Grigio is underdeveloped and underused in the film, as if the actor’s presence is little more than a marketing ploy.

But the most glaring problem with the script concerns Julie.  Levin never gives her enough time away from R to understand how she could fall in love with a walking corpse, other than it’s dictated by the story..  To be fair, Hoult is the prettiest zombie ever to grace the screen, and he does stop smelling like a rotting corpse as he becomes more human.  But while one could understand Julie’s curiosity over a zombie not wanting to eat her, it’s another thing to fall in love with creature that ate her boyfriend’s brains.

As for the effects, zombie fans shouldn’t expect any gore or gut munching.  Remember, this film is a romantic comedy at its core and a scene with R covered in the blood and flesh of Perry would make the thought of Julie falling in love with him an insurmountable task for the audience.  Levin does get the point across during the film’s only zombie attack against humans, but the moment is shot so we know what R is doing without wallowing in the gruesome details.

Yea, I think this gets the point across that R is looking for a quick bite.

As for the Bonies, the CGI creatures look awful.  I suspect the reason for not using actors in full body makeup is to keep the film’s creepiest zombies looking rather cartoonish, thus ensuring a PG-13 rating.  But this failing is easy to forgive once the zombie horde let by M shows off their “heart lights.”  If you’ve seen the trailer, you no doubt remember this moment, which is not only pointless to the story, but insulting to the audience as well.  The script and the actors do a fine job conveying the idea that R’s love for Julie is awaking the humanity in other zombies as well.  But Levin decided the audience is too dense, or stupid, to understand this and decided to film a roadmap in pretty neon red, rather than assume viewers were smart enough to follow his story to this point.

Despite it’s flaws, Warm Bodies is a fun evening’s entertainment.  Hoult’s performance is quite good, the script moves at a nice pace and delivers several good laughs (the bit where Julie and her friend try to make R look human has the best use of Oh, Pretty Woman in a soundtrack ever).  The script contains a few nice satirical moments and zombie fans will love the nod to Fulci, as he seldom gets any attention in modern zombie films.  And, I must admit, it was nice to see a movie end without any suggestion of an upcoming sequel.  It doesn’t mean one won’t be made, but the film closes with a welcomed certainty missing in most recent genre films.

Wait, you mean Romero isn't the only director of zombie films?

I’m not suggesting zombie fans rush out to see Warm Bodies, or pick it up as a blind buy when it hits home video.  Just keep it in mind if your evening plans include a partner that is not into the genre.  It is not a gateway film, so put aside all pretenses of digging out The Living Dead at Manchester Morgue afterwards.  Just settle back and be grateful for a film that you both can watch, and enjoy, without feeling the nausea you would experience from another Twilight knockoff.
Posted by Chris McMillan at 6:27 PM