A co-production between MGM and Toei Studios, The Green Slime is the equivalent of a Saturday night Syfy movie.  You’ll never say it’s a good movie and the script has a few problems.  But the film is a great slice of cheesy fun and any quibbles about the script or special effects won’t diminish the joy of watching a group of astronauts battle silly rubber monsters with electrified tentacles. 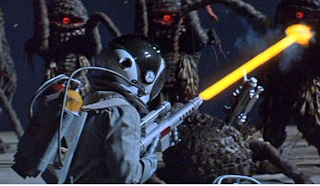 What more can you want from this movie?

It’s the future and the international space agency discovers a giant asteroid is only 10 hours away from colliding with Earth.  I guess telescope technology has taken a few steps backwards, but hey, they have flying cars!  Looking out into space just wasn't as important as flying cars.

Only retired Commander Jack Rankin (Robert Horton) is considered able to lead an expedition intent on destroying the space rock.  Of course, his rendezvous point is a space station ran by his ex-partner, Commander Vince Elliott (Richard Jaeckel), who Rankin considers unfit for a command position.  Oh, and Elliott is engaged to Rankin’s former flame, Dr. Lisa Benson (Luciana Paluzzi).  Yep, nothing could go wrong there.

Rankin, Elliott and a team from the station land upon the asteroid and start planting bombs, in scenes that makes one suspect Michael Bay saw this film as a kid.  The station’s scientist tags along, against Rankin’s wishes, and finds puddles of living Green Slime, the first proof of extraterrestrial life in the universe.  Rankin throws a bit of a tantrum when the scientist questions his orders to leave the specimen behind.  To foil any further arguments, Rankin grabs the glass jar containing the Slime and smashes it on the ground.  It shuts the scientist up, but allows a drop of the Slime to hitch a ride back to the space station in the folds of an astronaut’s suit.

The asteroid is destroyed, the rocket manages to survive the blast, and once the crew returns to the station, everyone starts dancing and drinking champagne in celebration.  Okay, I’m not a future astronaut, but one has to wonder why the station takes up precious storage space for crates of champagne.

Of course, every party has a pooper and in this case, it’s that spot of Green Slime, which mutates during the Rankin-ordered triple decontamination of the space suits into a walking, one eyed, tentacle waving messenger of death for the poor technician that wasn’t invited to the party.  Elliott tries to capture the creature alive, but this leads to the death of several crewmen.  Of course, Rankin’s solution is to shoot the creature, which does little to keep the Slime creature from scurrying into the bowels of the station.  But it does leave a trail of Slime creature blood that spawns more of the little monsters.  And, as these creatures feed on any energy source, Rankin’s laser rifle attack has the same effect as offering the Slime creature a Red Bull.

Soon, the station is full of the Slime creatures, Rankin and Elliott quarrel as Rankin orders the destruction of the space station and the growing horde of Slime monsters make it to the exterior of the station, jamming the launch bay doors.  Rankin orders a group of men to battle the critters, allowing Elliott to defy Rankin and leads his men into battle with the monsters. Uh, can you direct us to the nearest airlock?

If you’re a fan of B-movies, you know the rest (be warned, there are SPOILERS ahead).  The crew is evacuated, but the remote self-destruct device fails, so SOMEONE stays behind to detonate the station.  SOMEONE goes back to help, SOMEONE dies and the messy love triangle is resolved.

The script offers no surprise, but that doesn't matter, as the Slime creature attacks come often enough that one can forgive the cliched love triangle and hackney pissing match between Rankin and Elliott.  But the film fails by making Rankin, the film’s hero, a colossal ass.  It’s obvious the script wants the audience to root for Rankin, with his cocksure manner, perfectly coiffed hair and the fact that the sexy Dr. Benson is always looking at him longingly, even as she protests too much about their relationship being over.  And, sure, he might have a point criticizing Elliott for a botched rescue attempt in his past, but the script does nothing to make the character appealing.

His little tantrum on the asteroid makes him more of a bully and less of a commander.  And while he berates Elliott for the botched attempt to take the creature alive, it’s his actions on the asteroid that allows the Slime to tag along.  And his order for a triple-decontamination of the space suits allows the Slime to mutate into a walking menace.  Finally, his decision to shoot the creature leads to the station’s infestation, making Elliott’s attempt seem the sensible decision.  Sure, it’s all hindsight, but Rankin continually berates Elliott’s previous command decisions without reflecting upon his own missteps,  And, while Rankin is comfortable sending a squad to battle the creatures on the surface of the station, while Elliott leaves the safety of the station to fight alongside his men.

In fact, the script makes Elliott more heroic than Rankin, who comes off as more of a number cruncher, estimating the best course of action based on the least risk, while Elliott would have your back, no matter the danger. 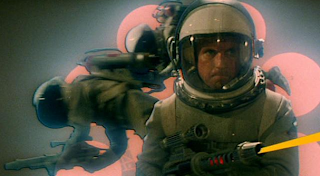 Come on, this is what the hero of this picture should be doing, rather than hiding in a command center

And Jenkins little "thumb up" salute to anyone injured or grieving comes off as pretty insensitive.  I suspect the filmmakers were trying to tie into the Apollo missions, showing that Jenkins is made of “the right stuff.”  It might have worked in the late 60's, but it comes off as (for lack of a better term) rather dickish and insensitive.  I hope kids in the audience, with dreams of becoming astronauts, were not inspired by Rankin, as such a role model would provide little hope for the future of successful space exploration.

That’s not to say Horton is a bad lead, but he’s as mishandled by the script as Paluzzi.  Sure, her role as Dr. Benson is to look good and give Rankin a reason to try and rekindle their relationship.  But after playing a lusty SPECTRE assassin in Thunderball, reduced Paluzzi to the damsel in distress is a bit of a let down.  If you cast an actress who gave James Bond a run for his money four years earlier, she needs to be given a bit more to do than scream and wait for the boys to come running. 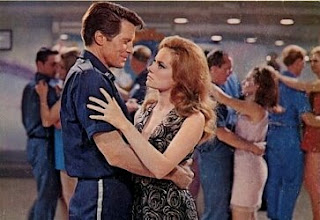 Sorry fella, you're no Sean Connery

Given the previous paragraphs, one would suspect I didn’t like The Green Slime.  But, as stated at the start of this review, such criticisms can’t dispel the film’s charms.  Sure, you could pick the script to pieces, but the action starts early and seldom lets up, leaving the audience little time to realize how silly the story is.  The battles with the creatures (especially outside the space station) are pretty exciting, if you can accept the limited effects of the time.  And the filmmakers up the ante with some pretty graphic mayhem.  The Slime’s victims look horrific, thanks to some understated makeup and great cinematography.  And a nice bit of editing makes a falling victim look like he squirts blood from his head as he hits the ground.  It’s nothing compared to what you might see on television these days, but it adds to the menace of the monsters and makes them a more convincible threat than one would expect.

Not exactly what you'd expect to see in a G-rated film, is it?

Whether it was the filmmaker’s intent or not, most B-movie fan’s inner five year old will squeal with delight as the spacemen battle those silly, yet iconic, rubber suited monsters.  And the story moves at a rapid enough pace that you won’t think too hard about the script’s problems until after the closing credits roll.  Invite some friends over, have a few drinks and enjoy the cheesiness!

You can buy The Green Slime through Warner Archives as a DVD On Demand.  Though it has no special features, the picture and sound quality is quite good and this version will do until the film is given a proper release by some other distributor (you listening, Scream Factory?).

On a final note, I can’t forget to mention the theme song, one of the weirdest to ever grace a monster movie soundtrack.  Take a listen below…

Posted by Chris McMillan at 1:40 PM