Modern horror fans might think the opening scene to The Abominable Dr. Phibes is too long and rather pointless.  The long, static shot of Phibes (Vincent Price), in a black cape and playing a pipe organ while arising from a subterranean lair, give the appearance that director Robert Fuest walked away from the camera, allowing Price to indulge in his campy side.

And Price does ham it up.  His hands wave about without even attempting to match the soundtrack (though this might not be Price’s fault).  But the scene works on two levels.  It not only sets up the campy tone of the film, but also is a brilliant merging of a classic Gothic character into a more modern setting.  Without this scene, the film would fall flat, and Price’s wonderful campy performance would appear out of place, rather than just out of time.  As Phibes and his organ arise into a brilliant white, Art Deco themed ballroom (it’s no surprise if his appearance brings images of The Phantom of the Opera to mind), the character and the setting meld in a manner a less elaborate scene would lack.  This opening, and several other bits, makes the film a must see for horror fans. 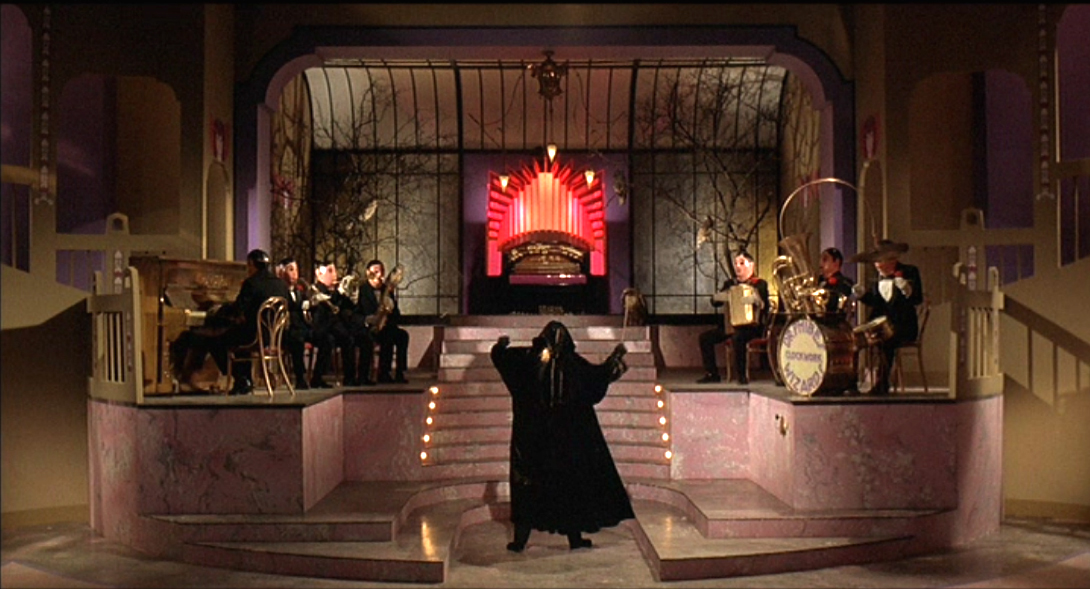 A Gothic character and Art Deco isn't as easy to combine as chocolate and peanut butter.  Just saying.

As expected, the plot is paper-thin.  Scotland Yard Detective Trout (Peter Jeffery) links a series of murders, based on the plagues visited upon Egypt by Moses, to a medical team that failed to save the life of Victoria Phibes (an un-credited Caroline Munro) several years earlier.  Trout suspects Phibes, despite his reported death in a car crash as he raced to be at his wife’s side.  Working with the lead surgeon, Dr. Vesalius (Joseph Cotton) to protect the other team members, the pair are always one step behind the diabolical genius.

Yes, it sounds like little more than an earlier, slower paced version of the more recent entries in the Saw franchise.  While the deaths are imaginative enough to make Jigsaw applaud in appreciation, Phibes is more interested in revenge than imparting a moral message.  Fitting into a role of the wronged, disfigured genius seen in countless films from the start of cinema, Phibes becomes a forgotten fixture in cinema history, his intentions driven by the simplest desire.  His madness is not to teach, nor the simple blanket of insanity that infused horror films since Psycho.  He is the desire to avenge oneself upon those that wronged him.

But the script, as with the more modern setting, isn’t as simple minded.  During the film’s climax, Dr. Vesalius earnestly pleads that he and his team did everything possible to save Victoria.  And while Vesalius’ cries fall upon deaf ears, it does cause the audience to wonder if her death was unavoidable, rather than caused by malpractice.

Wow, that jury was really harsh!

In addition to their smart decision to leave Phibes’ motives questionable, screenwriters James Whiton and William Goldstein (and an uncredited Fuest) inject some wonderful, nasty humor into the script. The build-ups to, and executions of, the murders are ghoulish fun, as are some of the end results (just try not to chuckle as the Plauge of the Beasts victim is removed from the crime scene).  And naming Dr. Vesalius after Andreas Vesalius, the Belgium physician considered the father of modern anatomical studies (quite likely, given Vesalius’ task at the climax of the film) shows the writers did their homework, even if the audience didn’t get the joke.

The cast is wonderful.  While Price overshadows them all, chewing the scenery at every chance, the others are the perfect foil to Phibes.  Their subdued performance set them up as the perfect straight men and reinforces the idea that Phibes is a character out of place with the time period.  Only Terry-Thomas gets to ham it up, but only to sell his lecherous glee over a rather tame stag film.

Virginia North, playing Phibes’ mute assistant Vulnavia, deserves special mention.  The script never gives any hint why she is aiding Phibes, casting her as a surrogate for the audience, as we become so captivated by the insane doctor that we become as willing participant as she is.  Adding to the character’s allure is North’s physical performance.  She moves with the grace of a ballerina, as captivating as Price with a simple movement of a wrist or a graceful spin.  IMDb lists this as her final film credit, which is a shame, as her performance hints at talents untapped in previous roles. And she's a terrific dance partner.

The sets, designed by Bernard Reeves, are stunning.  And the design of Phibes’ more futuristic technology is terrific, as the machines still invoke a 1920s sensibility.  It’s a delicate balancing act, but the film scores once again, making this more of a timeless fantasy than one set in a particular era.

I’m trying not to spoil much more, as horror fans should seek out The Abominable Dr. Phibes.  Modern viewers might have trouble with the pace, but I suspect the rich performances, dark humor and death scenes that don’t need CGI or buckets of blood to be unnerving will win most horror fans over. Yea, just try not to squirm when you realize this is a pre-CGI bat.

Posted by Chris McMillan at 6:33 PM