It’s impossible to criticize Sharknado Two: The Second One, a film designed to be cheesy and stupid.  The Asylum has taken manufactured camp to a new level, making this series as outrageous as possible, with an utter disregard for crafting anything resembling a good film.  It’s the basic idea of a film so bad it’s good, except the film is intended to be bad, unlike a filmmaker intending to make a good movie while falling short of the mark due to budget constraints or, perhaps, talent.

Yes, I’m saying The Asylum could produce (or at least attempt to produce) decent genre films.  But the studio has found a niche with cheesy giant monster films and, like great B-movie makers of the past, are happy to deliver what the audience wants to see. 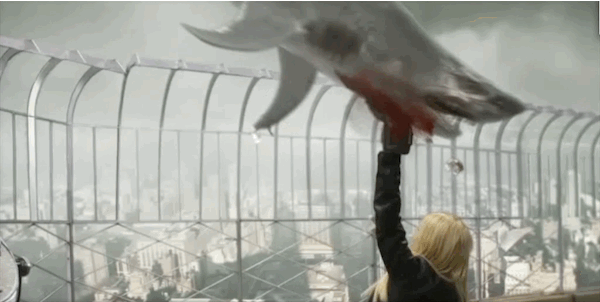 Which, is basically, sharks attacking us on land,
and the cool ways we can kill them.

Okay, let’s get into the meager plot out of the way.  Our heroes from the first film, Fin (Ian Zering) and his ex-wife Apri (Tara Reed), are flying into New York for a reunion with Fin’s sister Ellen (Kari Wuher) and her husband Martin Brody (Mark McGrath).

Oh yes, we have more Jaws references coming, but the film isn’t above lifting elements from other sources.  As their flight descends into the Big Apple, Fin starts having a Twilight Zone moment, as he sees sharks on the wing of the plane.  Of course, no one else sees them, including an air marshal on the flight, but soon the plane is invaded by flying sharks that decapitate a number of passengers.  Yes, let’s be honest, these sharks are propelled by the sharknado into the plane, and just keep coasting through the plane until they reach the rear exit.  Or just pile up in the coach seats, it's never made clear in the film.  Nor does it need to be. And this wins my vote of cameo role of the night.
Guess he picked the wrong week to stop sniffing glue.

As the sharks take care of the pilots, Fin has to land the plane during the storm.  Meanwhile, April is hanging out the blown out door of the plane and has her hand bitten off by a one eyed shark that she later claims had vengeance on its mind (Jaws: The Revenge, anyone?).  Yeah, the sequences is preposterous, but this is a movie involving sharks surviving out of the water while in a freak weather pattern, so just let it go.

Yes, as explained by Today Show hosts Al Rocker and Matt Lauder, New York City is about to be hit by a massive cold and hot weather front, resulting in TWO sharknados about to merge into an apocalyptic shark storm.  And, as the only expert on dealing with sharknados, Fin has to save the city and rekindle his relationship with April.

Add in Fin’s high school sweetheart (Vivica A. Fox), a helpful cabbie (Judd Hirsch), an oversized chainsaw (of course), flaming sharks (yep, you read that right) and April turning up in the final act with a circular saw attached to her stump, and you have the recipe for a really cheesy fun time. Good luck finding a bigger chainsaw for the sequel,
scheduled for next year.

A lot of people criticizing films from The Asylum as being manufactured camp, which can’t be denied.  But it also doesn’t matter.  The filmmakers do not waste any time, diving headfirst into the insane action.  We get the requisite character moments during breaks in the action, but the film keeps throwing sharks at our heroes at a frantic pace, but not in an attempt to mask the film’s stupidity.  Instead, the filmmakers keep piling on the outrageous moments without concern for any sense of realism.  It all culminates with the moment where our heroes are cornered in a stairway, with shark infested flood waters below, and flaming sharks flopping at them from above.  Yep, flaming sharks.  This film goes there.

Oh, wait, the insanity doesn’t culminate with that scene.  We still have the Live and Let Die shark jump moment, and the final descent into full blown craziness, as Fin managing to bronco ride a giant shark onto an areal antenna to keep from falling to his doom. No, I'm not kidding.
The filmmakers went there.

If you haven’t notice by now, Sharknado Two is gloriously ridiculous and has no qualms embracing its stupidity.  In fact, the film dares the audience to level any criticism against it, because the instant you try, the film delivers another scene that just makes any rational discussion about the film moot.

The premiere was a ratings boon for Syfy, as they beat most broadcast stations in the ratings, and Sharknado Two was the major event on most social media.  And, to be honest, the ratings might be a bit low, as Neilson only shows how many households were tuned it.  It doesn’t reflect how many people were watching in that household, or how many were watching in other venues. 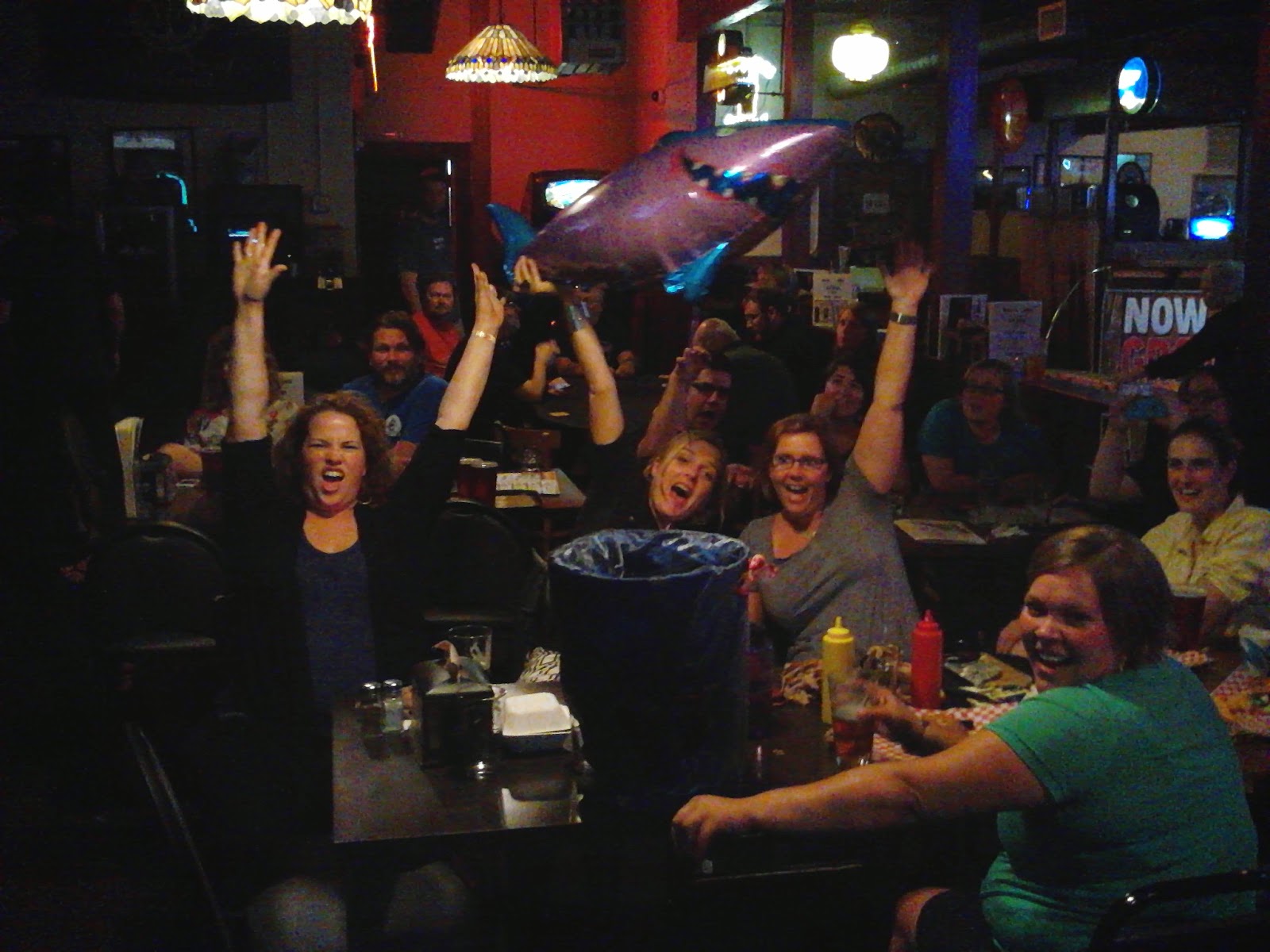 Like this group.  Man, what a great time!
Thanks everyone. for showing up!!

I’m sure some are wonder why this series is so popular, and I have a couple of ideas that might explain the reasons so many people are tuning into such films.

First, the current state of the country, and the world, is pretty depressing.  War, economic uncertainty, the threat of terrorist attack (real or overhyped) hangs over our heads on a daily basis, broadcasted by 24 hour news stations more concerned with ratings than an actual analysis of current events.  As horror films proliferated, and reflected, the anxieties of the times, the success of the Sharknado series is a release from the stresses of modern life.

No, it’s not a reflection of societal fears as, say, The Invasion of the Body Snatchers was a reflection of Communism/McCarthyism during the 50s.  The modern world is much too complicated for one movie to be a statement of what scares us.  But it is a release valve of sorts, something in which people can gather with a group of friends, laugh, jeer and become engrossed in something so outrageous they can forget real world problems for a while. It's hard to worry about world problems when you're watching a movie where it's raining sharks.
And, for two hours, that's not a bad thing.

And Sharknado Two is an example of people watching to see how crazy it will get.  I remember my father watching Army of Darkness for the first time.  I was at home from college for the summer, watching my VHS copy of the film when he came home from work late one night and sat down with me to see what I was watching.  When Ash got back to the castle with the Necronomican, he announced he wasn’t going to watch anymore of this stupid movie and was going to bed.   Yet, not more than five minutes later, he was back, admitting he had to see how the movie ended.
Now, I am NOT equating Sharknado Two with Army of Darkness.  But, let’s be honest, both movies were made to be campy and silly.  And, as we all know, the best stuff is often saved for last act in movies.  At some point, you have to keep watching just to see how far the filmmakers on the crazy/awesome scale.  My father was laughing at the end of AoD, and I suspect most viewers were doing the same as Fin rode a shark across the sky.  I know I was, even as the rational part of my brain tried to chime in about how idiotic the moment was. 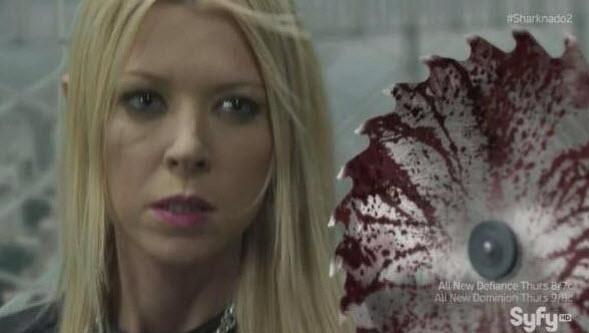 The only flaw with this moment is she didn't say, "Groovy."

But my inner five year old won out, fueled by the inner five year olds of those around me.  And that’s the best way to watch Sharknado Two, with a group of like-minded friends and an ample supply of your favorite beverage.  Much like a hang over, you might regret what you did in the morning.  But you will have a fine time that the evening.
Posted by Chris McMillan at 8:52 PM