Well, the New Year is already burying me with lots of cool events to share with Northwest Horror Fans!

Well, it's time for The Shadow Over Portland weekly update and I already feel like the New Year is getting the best of me.  I'm finding so much stuff to share with Northwest Horror Fans, sometimes on VERY short notice (see the listing for Rustycon 33 in Seattle, WA, next weekend).  And I've already posted a special update just days into 2016, trying to keep everyone up to date.

Okay, it's not as busy as October, but I wouldn't have expected all this stuff to happen in January.  Seriously, look at next weekend!  And the rest of the year is starting to fill up as well, so be sure to check out the Horror Calendar so you can plan out the first quarter of the year!!

But, for now, here's all the news I've found for the coming week under The Shadow Over Portland! Weird Wednesday continues to pile on the cheesiness at The Joy Cinema and Pub (11959 SW Pacific Highway) in Tigard, OR, as War of the Robots screens tonight at 9 pm.  Robots, genetic scientists and an alien race battle it out for the fate of the world, or something like that.  Admission is free, so you'll have some extra money to spend on beer and snacks at the concession stand, which should help you enjoy this film even more!  Remember, you must be over 21 years old to attend.  For more details, visit The Joy Cinema website later in the week. 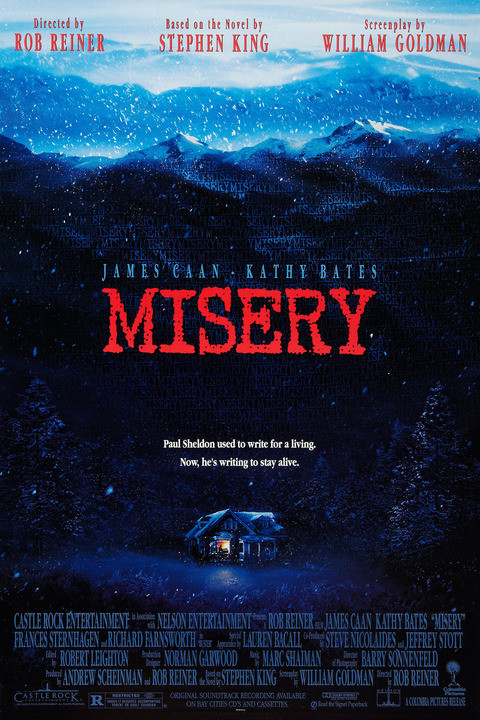 Friday Night Frights presents Stephen King's Misery at the Blue Mouse Theater (2611 N. Proctor St) in Tacoma, WA, tonight at 10 pm.  Admission is only $6, and there will be PRIZES and more.  And seriously, this is one great film that should be experienced on the big screen.  You can find more details at the Facebook Event Page. 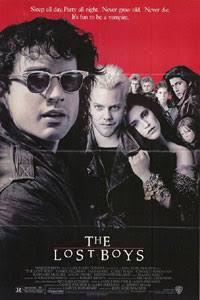 "Death by stereo!"  Okay, I have issues with the final 10 minutes of The Lost Boys, but up until that point, it's a damn good vampire movie.  Still, the gore at the end is delightful, over the top fun and the script is pretty good.  But I still think it dropped the ball at the end.  Part of the Olympia Film Society Friday Night Frights series, the film screens at the The Capitol Theater (206 5th Ave SE) in Olympia, WA tonight at 9 pm.  Visit the Capitol Theater website for more details.

Sorry for the late notice, folks, but I just found out about Rustycon 33, Seattle's first Sci-Fi/Fantasy con of this year, runs through Sunday at the Hilton Seattle Airport and Conference Center (17620 International Blvd) in Seattle, WA.  Games, panels, kid's activities and a full costume contest masquerade are just part of the geeky fun to be had up in Seattle this weekend!  For more details, visit the Facebook Event Page or the official website.  Again, sorry for the late notice, I'll try not to miss the next one! 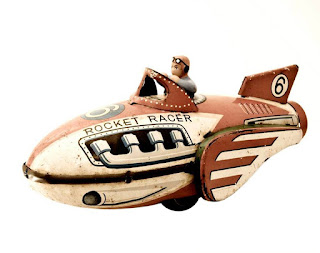 The Clark County Antique and Collectable Show runs through Sunday, January 17, at the Clark County Event Center (17402 NE Delfel Rd) in Ridgefield, WA.  You'll find Pez dispensers, toys from the 1880s to the 1970s, get your own treasures evaluated by an ISA appraiser for just $7 an item, and much more.  Check out the Facebook Event Page for more details. 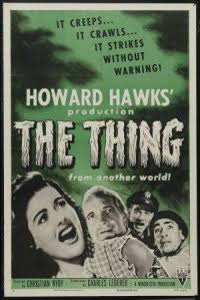 Oh man, if I was able to be in Bellingham, WA, today.  The Thing from Another World is playing at playing at The Pickford Film Center (1318 Bay St) and I would DIE to see this one on the big screen.  No, it's not the John Carpenter version, but the Howard Hawks production about a giant "carrot" monster attacking the scientists living in an Arctic research station.  Okay, let's not get into the debate as to whether Hawks or Christian Nyby was the director, the film has classic Hawks troupes throughout, including sharp dialog, strong female characters and, if this is the version I didn't see on commercial TV when I was young, a light bondage scene with Kenneth Toby and Margaret Sheridan.  Oh, how AWESOME will that be on the big screen!  The show starts at noon, and you'll find more details at the official website. 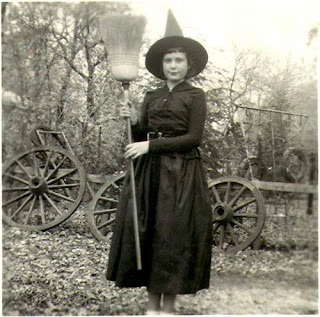 The 4th Annual Northwest Magic Conference will hold a gathering of "witches, priest-esses, faeries, magicians, mystics, wizards, and more," this weekend at the World Forestry Center (4033 SW Canyon Rd) in Portland, OR.  Featuring classes on divination, tarot, queer mythology, faerie magic and much more, you can find more details, as well as advance ticket sales, at the Facebook Event Page.  Sorry, but Early Bird Prices end tonight (January 4).  Still, check out the site and perhaps find the magic within you! 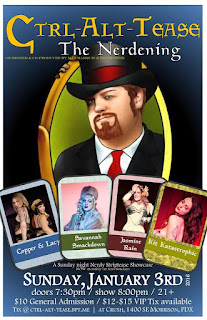 Okay, I wasn't aware of this earlier, but Ctrl-Alt-Tease: Happy Nerd Year!/ The Nerdening, has been postponed due to the winter weather until tonight at 7:30 pm at the Crush Bar (1400 SE Morrison) in Portland, OR.  After all, is it really worth risking life and limb for a show featuring burlesque performers channeling their inner nerd and presenting acts based on sci-fi and fantasy TV shows, movies and video games?

Okay, dumb question.  At least, thanks to the postponement, you don't have to risk icy roads to bask in all the geeky burlesquing.

You'll find a complete list of the performers, as well as a link for advance ticket sales, at the Facebook Event Page.  Co-hosted by Critical Hit Burlesque, this sounds like it will be a monthly event.  Stay tuned for more details on next month's performance! 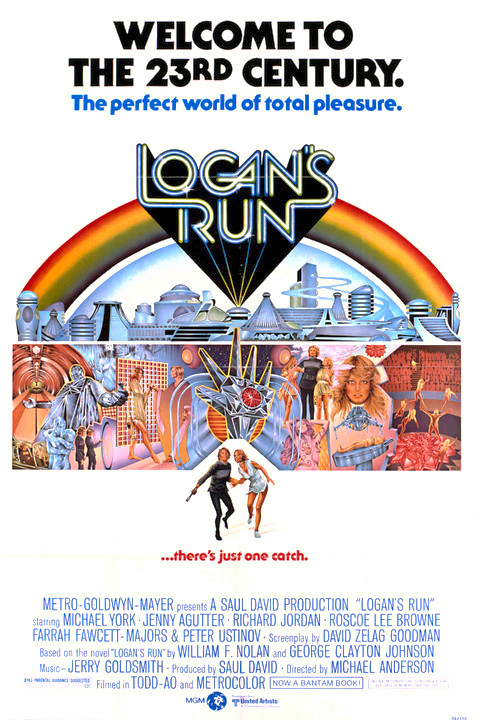 The Clinton Street Theater (2522 SE Clinton St) in Portland, OR, is hosting a screening, in conjunction with the Portland Geek Council, of the 1970's sci fi film, Logan's Run, with author of the novel, William F. Nolan, in attendance.  The screening starts at 2 pm, and you can find more details at the Facebook Event Page.

Be sure to check the Horror Calendar for more upcoming screenings, details on the postponed Scream and Ink con in Salem, OR, next month and updates on guests to Crypticon (May in Seattle, WA) and Wizard World Comic Con (February in Portland, OR).

If you are hosting an event that think will interest the readers of The Shadow Over Portland, send me an email at shadowoverportland@live.com and I'll post it on the Horror Calendar and in my weekly updates.  Remember, I do not charge, or ask for any compensation, in order to list your event on this site.  It is absolutely free.

And remember, if you attend any of these events, let the organizers know you read about it at The Shadow Over Portland!
Posted by Chris McMillan at 7:09 PM