Updating a classic film must be a tricky act.  Follow the plot too closely, and fans of the original will cry out that the film is offering nothing new, and is no where near as good as the original.  Deviate too far from the plot and those same fans will protest that move as well.

Add into the mix that most studios are now more interested in setting up a
cinematic universe, with endless sequels, rather than make a fun, stand alone film.  Given all this baggage, it's surprising that Kong: Skull Island works at all.  Yes, the film is a set up for the Giant Monster-verse to come from Legendary Studios, but the clues are much more subtle than most universe-building movies.  And the film is terrific fun, from start to finish.

The film takes place in 1973, as the United States is pulling out of Vietnam.  Bill Randa (John Goodman) and his assistant Houston Brooks (Corey Hawkins) are members of Monarch, a government agency on the brink of being defunded.  No surprise, as the group is on the hunt for ancient monsters, but Randa manages to pull some strings and gets one last expedition funded to a island unseen by modern man until until a recent satellite photograph reveled its location.

Of course, the team starts dropping bombs, oh, sorry, the proper term is seismic charges, for subterranean mapping.  As the survey revels evidence supporting Brooks' hollow Earth theory, the operation is cut short by Kong, who doesn't take kindly to strangers vaporizing parts of his island. 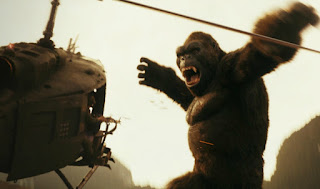 Two groups of survivors survive Kong's assault.  Packard leads one, set on taking the big ape down, while Conrad, Weaver, Brooks and a few others find a tribe hiding behind a giant wall.  Just by luck, Hank Marlow (John C. Reilly) a U.S. Air Force pilot marooned on the island since World War II, is around to explain the wall is meant to keep the other creatures, which he calls Skullcrawlers, at bay.  But the village's true protector is Kong, who kills the beasts as they emerge from deep caverns around the island.

As expected, as the two groups reunite and attempt to make a scheduled rendezvous with an extraction team.  But Packard decides this is one battle he will not walk away from and decides to take out Kong. 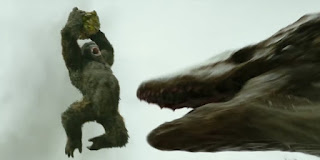 Say hello to my little friend!

And let's be honest, that's what we're in the theaters to see and the movie delivers in spectacular fashion.  Unlike Garth Edward's Godzilla (the first movie in the upcoming Giant Monster-verse), Kong is in full view right away, smashing the copter squadron in a brutal, exciting set piece.  Then we get other creatures, some benevolent, others eager to add humans to the food chain, all shown on screen in their full glory.

It seems the studio also listened to the complaints about the human characters in Godzilla being uninteresting and more the focus of the film than the giant monsters.  The characters in Skull Island are simply guides leading the audience across the island and from one monster attack to the next.  Though they do get involved at time, the film is shot to show how puny they are compared to the inhabitants of the island, and their ineffectiveness at protecting themselves against the onslaught.  It's a nice build on the theme in Godzilla, that some monsters exist as our protectors, maintaining the balance of nature. 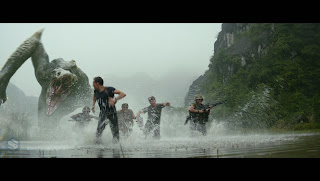 Humans are the superior species on Earth!
We can...  Oh hell.
Run away!  RUN AWAY!!

It's also nice that, by the time the action sequences kick in, the script delivers as more character development than you might expect in a film about giant monsters.  Sure, most of the soldiers are lifted from most any other war movie you might have seen, and some of the scientists are underutilized.  But the main character's motivations are never in doubt and the script allows for a bit more revelations during the quick breaks between the monster battles.  And it's nice that Marlow is treated with respect by the script, given some great character moments and allowed to be eccentric without becoming a parody.

Best of all, Weaver is not an Ann Darrow surrogate.  Though her job as a photojournalist in a war zone might seem odd for the era, it's not unprecedented (Goggle Dickey Chapelle, for starts), and she is not over-glamorized by the filmmakers.  Sure, she looks good in her tank top, but the film doesn't focus on her physical appearance, and neither does the mostly male crew.  And though she does have a few moments with Kong that might lead one to think she's going to catch the big guy's fancy, the filmmakers steer clear of recycling that plot point.  It's a refreshing break from the normal portrayal of the main female character in a monster movie, and from a story that was so well told back in 1933, it does not need to be replayed. 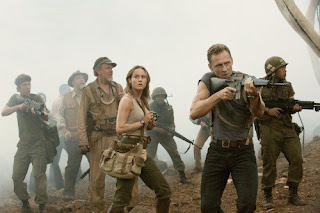 But the film isn't shy about dropping homages to the earlier films.  The script includes plenty of the standard Kong troupes, like the besieged natives hiding behind a giant wall, a giant spider (above the trees this time, not in a pit) and Weaver ending up in Kong's palm (again, not for the reasons you expect, so leave the Beauty and the Beast idea in the theater lobby).  The film also lifts a moment from Jackson's remake and fans of the original will recognize the Skullcrawler's origins.

What's more amazing is that the film is such a good monster movie considering the filmmaker's credits.  Director Jordan Vogt-Roberts' directorial debut was 2013's coming of age film, The Kings of Summer.  And with the exception of Derek Connolly (Safety Not Guaranteed, Jurassic World and Monster Trucks), the writing staff has little experience with genre films.  Given their previous work, it explains how the filmmakers were able to develop the characters so well in such a brief amount of time, but I would not have expected them to deliver such a great monster movie.

Screenwriter Max Borenstein worked on Edward's Godzilla, and I suspect his inclusion was to set up the upcoming Giant Monster-verse.  The hints are there, but as I mentioned, the audience is not beat over the head with the clues.  The moments are subtle and will become more clear with the next feature in the series.  I must admit, it will be fun rewatching this film before and after Godzilla: King of the Monsters arrives in theaters.

But, should you need more details, or just want to get a chill down your spine as to what might be coming next, stay for the post-credit scene.  I'm serious, wait for it, it's worth it.

Nope, not going to spoil it.
You'll have to sit through the credits
like the rest of us.

Now, I just want to let parents know this film does push the PG-13 rating to the limit.  A few humans meet surprisingly gruesome ends and while no blood is spilled (as is the case for PG-13 films), a few moments are as harrowing as the Spider Pit scene in Jackson's Kong.  Just wanted to let you know, this could give younger kids a fright.

It might not surprise you that I'm a BIG '33 King Kong fan and this movie will not replace the original.  But, to the filmmaker's credit, the film isn't trying to craft a better Kong and the Beauty story.  Instead, they set off on a different path with the big guy and delivered a massively fun monster movie, full of wonder, terror and giant creature battles.  Kong: Skull Island is much better than I expected and now I can't wait for the big guy to return in 2020.

Especially after the post-credit scene.  Oh, it's going to be epic!
Posted by Chris McMillan at 1:30 PM