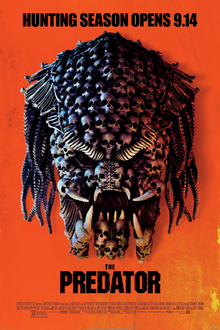 The Predator franchise has a rocky history since the creature first appeared in 1987.  After a fairly successful sequel, the space hunter was pit against another outer space beast, the xenomorph from the Alien franchise, for two lackluster films, before the series returned to a more macho-infused journey to an extraterrestrial game reserve in 2010's Predators.

That film was a box office and critical success, and many expected a sequel.  But 20th Century Fox changed course, and co-writer/director Shane Black brings the series back to Earth in the latest installment in The Predator.  This film is a sequel to the first two movies, ignoring the AVP films and the events from the earlier one.  Of course, it's possible the survivors from Predators might be mentioned in future films, but that depends partly on the success of the new chapter.

Set course for sequels.
Lots and lots of sequels.

The Predator opens during a rescue mission in an unnamed country.  Sniper Quinn McKenna (Boyd Holbrook) is the lone survivor as a Predator ship crashes near the mission and the creature kills his squad.  McKenna finds the creature's helmet and a wrist gauntlet, which he has mailed to a PO box before swallowing a small sphere, the source of the Predator's cloaking ability.  Yeah, expect that to come back when it's most needed.

McKenna is debriefed and, once he confirms he saw the Predator, he is taken into custody and sent with a group of off-kilter military prisoners to a detainment site.  The Predator is captured by the government and sent to a research facility.  Evolutionary biologist Casey Bracket (Olivia Munn) is contacted by the government to study the Predator once it's discovered that the alien's DNA contains human strands.  Of course, the Predator doesn't take kindly to being probed and escapes, killing everyone except Bracket, who chases after the creature. 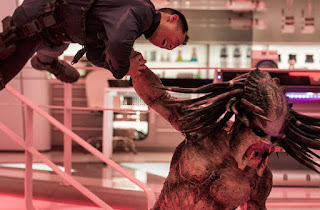 Don't even THINK of putting that up there,
you damn dirty human!

The bus transporting McKenna is rerouted to the facility as the Predator breaks loose, and the prisoners escape in the mayhem, taking Bracket with them.  McKenna convinces the group to help him recover the package of Predator technology and use it to prevent them from being killed by the government for what they've seen.

The problem is, McKenna's package was delivered to the home of his estranged wife, and his autistic son Rory (Jacob Tremblay) has interpreted the Predator language and is wearing the armor as a Halloween costume.  Things become even more complicated as a second, much larger Predator joins in the hunt with his tracking dogs.  Bracket is able to deduce the Predators are attempting to hybridize their race with DNA from the strongest, smartest races they've encountered, creating a threat to Earth and the rest of the galaxy. 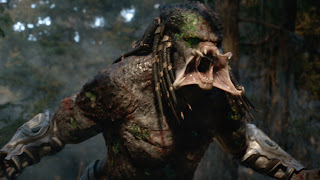 Now in an bigger, even uglier motherfer version,
for maximum mayhem.

I really enjoyed the first half of the film.  Holbrook is a likable hero, who relies on out-thinking the Predators and the shadowy government agents hunting his group.  Munn is good as a scientist out of her league, coming off a bit overwhelmed but still capable at her job. And McKenna's new squad might not be as likeable as Dutch's crew, but the script give the actors enough to make you care about them before the Predators start ripping into them. 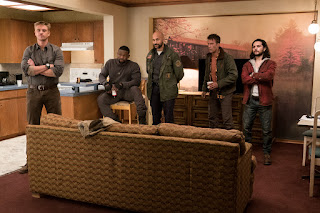 Nope, nothing creepy about us, even though
we were passengers on the bus to crazy town.

I also enjoyed the casting of Jake Busey as one of the scientists in the government facility.  It's a nice nod to the casting of his father, Gary Busey, in a similar role in Predator 2, though his role is more restrained and, unfortunately, much briefer.  The geeky debate about calling the alien a Predator is pretty funny and the "get to the chopper" moment is a hoot.

But the film falls apart once the Super Predator arrives.  The government agency studying the Predator becomes maniacally evil, to the point where I expect them to start wearing top hats and twirling their moustaches.  Of course, McKenna's group and the agency is forced to team up in an attempt to survive the Super Predator's attack, and the action gets so frenetic that it's hard to keep track of who dies when, and how.  And the Predator dog ex machina was a bit tiring, as it shows up every time a character is in dire straits, upchucking the right tool to keep them alive.  Yep, that does happen once, and it weakens the film.

The final assault, which starts out on the surface of a FLYING Predator ship, suffers from what I call the Die Hard Syndrome.  As with other action franchises, the filmmakers feel obligated to make the stunt work more impressive than the previous films, and with the advent of CGI, it's possible for the heroes to do almost anything.  But, as with other action films, this leads to a sequence where it's inconceivable that a human would survive, let alone be intact enough to save the day.  And Bracket's turn from scientist to kick-ass action hero during the final battle is quite a stretch, though Munn does a very convincing job. 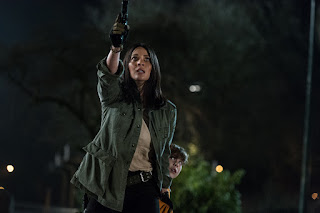 Okay, I'll act like a normal human for now.
I'm just waiting to unleash my inner Psylocke in the final act.

As expected, the ending sets up a potential sequel (I have to say, Munn's absence from that scene is rather obvious and surprising; one wonders if her exclusion is due to her calling out an actor, and friend of the director, as a sexual predator).  But if a followup doesn't happen, the film delivers a complete story, with no dangling questions that will be revolved only if a sequel is made.  It's more satisfying than other recent attempts to reboot a franchise (Terminator: Genysis, I'm talking to you).

The Predator might not be a great addition to the franchise, but it's a good enough to be an enjoyable romp during a rainy Northwest weekend.  Keep your expectations low, and you'll have a fine time. 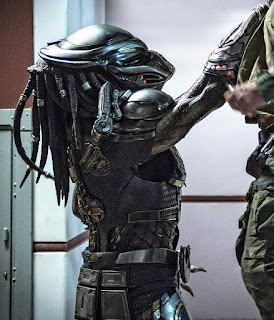 I'll be back, if the box office allows it!