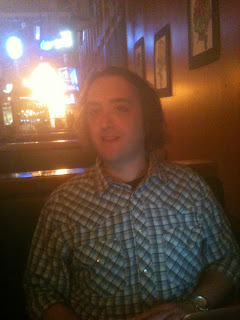 In yesterday's post, I talked with Jeremy Jantz, film student at the Art Institute of Portland, about his senior project, a short, NC-17 style horror film called Heels.  Today, Jantz talks about the sudden decision by the Art Institute to require cuts to his film for it to be included in the senior screening, and how this lead to The First Annual Salon De Refuse Film Festival, on Thursday, December 12.

Please note, this interview was conducted via email exchange.


The Shadow Over Portland: So, your plans to show Heels at the school's screening have changed.  What happened?

Jeremy Jantz: To be honest, it was a bit of a blindside.  I got called into Aldrich's office (head of the DFV department).  He told me it had been decided that unless I censored my film, they wouldn't screen it.  I politely declined.  He offered to let me show another film of my choice.  I offered a seven-minute clip of my middle finger.  Aldrich was not amused.  Up until this point, four weeks from the screening, I was told Heels would screen, simply with a warning and intermission.  Which seemed fair.


TSOP: Was the school's objections due to the nudity, the violence, or the overall content of the film?


JJ: The biggest specific objection was the footage involving a penis.  I was told the female nudity could probably be approved, but definitely not the penis.  Personally, that doesn't seem fair.  It's not men's fault God made penises ugly.

There were also insinuations that the overall content might be an issue.  However, the penis was such a sticking point that was no real point in discussing the rest of it.  The didn't want to see a penis.  Ever.

TSOP: In our earlier talk, you said you would just rent out a theater and show Heels there, if you had to.  So you are screening your film on December 12 at The Academy Theater, as part of The First Annual Salon De Refuse Film Festival.  Can you give us the details on the festival, and what other films are showing?

JJ: The centerpiece of the show will be the midnight screening of Heels.  I have several other films confirmed.  We'll be showing an adaptation of the Stephen King short story Survivor Type.  Another student, Brendan Jones, pulled his senior film from the official screening in protest over the censorship issues, so I'll be showing his short experimental film, The Test.  I just confirmed Edward Lee's The Bighead, from director Michael Ling.  That should be great, I'm really excited to see it.  And I just heard we've added M is for Massage, an ABCs of Death entry.

TSOP: Are you still accepting submissions?

JJ: I am still accepting them.  I'm really hoping the addition of Edward Lee's The Bighead will add the legitimacy to bring in local submissions.  I can't stress enough how much I want to see that film, and how great those guys are for letting me show it.

TSOP: The festival starts at 10 pm on Thursday, December 12.  How can people get tickets?

JJ: There are no tickets.  It's completely free.  The Academy would have let me charge whatever I wanted, but in the spirit of horror fan fellowship, I'm not asking for anything.  I won't even pass the hat for donations.  The festival is in the large theater, so there/s plenty of seats, but it's a first come, first served thing.  The Academy has been very supportive and has pledged to make it a fine screening.

TSOP: Are you facing any repercussions from the school for screening Heels outside of the Art Institute's event?

JJ: That's difficult to pin down.  I'm having trouble getting anyone to sign off on internship hours, so maybe in a week, when I should be graduating, I'll get my repercussions.  Immediately before my film got pulled, I also refused to sign a contract allowing AI to use my work for their purposes.  Coincidence?  I don't know.

TSOP: Will we see another Salon De Refuse Film Festival next year?

JJ: It's always possible.  If it's popular, maybe I can move into a more traditional festival model to at least cover expenses.  I certainly would like to bring more horror shorts to Portland, even if for mostly selfish reasons.

I'm hoping that students in the future will realize that they can make the movie they want, the movie they're paying out of pocket for, and the AI screening is not the end of the world.  In fact, I've always looked at it as, hopefully, the least important screening I'll ever have.  It's like getting a participation trophy, although now, I don't even get that.

TSOP: Thank you for taking the time to talk with me, and the best of luck with your festival.

JJ: Thank you.  And I hope to see you there.

The First Annual Salon De Refuse Film Festival is on Thursday, December 12, at The Academy Theater.  The screenings begin at 10 pm and admission is free.  For more information, visit the Heels Facebook page..
Posted by Chris McMillan at 7:12 PM