Christmas themed horror films often involve a slasher-dressed-as-Santa killing in a holiday themed manner.  And, as with holiday specials on TV, one can only take so many of them during the season.  That makes writer/director David Steinman’s film, Santa’s Slay, so much fun.  Rather than sticking a killer in a Santa suit, Steinman rewrites the legend of the jolly old elf, changing him into someone more sinister, and more cartoonish, than your basic slasher-Claus.

The film opens as a stereotypical dysfunctional family, portrayed by James Caan (yes, really), Fran Drescher, Chris Kattan, Rebecca Gayheart, and twins Alicia Loren and Annie Sorell, are gathered for a holiday feast.  But before the turkey can be carved, Santa (wrestler Bill Goldberg) breaks through the chimney and slaughters everyone, starting with the pampered little dog. 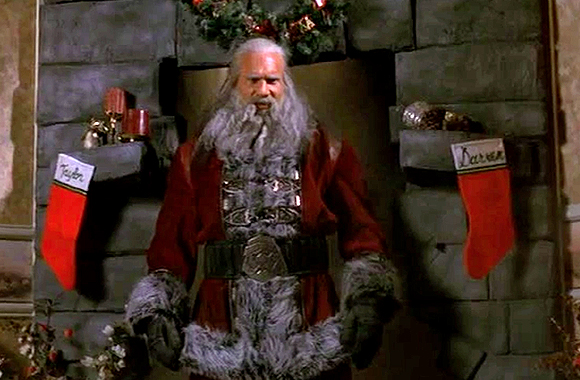 The gore is silly, the humor broad and the scene sets the tone for the rest of the film.   The script never tries to generate any suspense or terror, as if Steinman knew horror fans might need a light, cheesy snack during the annual marathon of serious (at least in tone) Slasher-Claus films.

After a nice montage during the opening credits that sets the stage for Santa’s backstory, the film moves to the Township of Hell, located somewhere with lots of snow.  Nicolas Yuleson (Douglas Smith of Percy Jackson: Sea of Monsters and Antiviral) is living with his crazy inventor, and security minded, Grandpa (Robert Culp!).  And, in a plot point more outrageous than a muscular Santa, our teenaged hero is oblivious to the signals by his cute coworker Mary “Mac” Mackenson (Emilie de Ravin of Lost, The Hills Have Eyes remake and Brick).

But figuring out Mac’s amorous intentions becomes a secondary concern once Santa comes to town.  It seems Santa is the son of Satan, condemned to bringing joy to good little girls and boys for a thousand years after he is bested in a curling match by an angel.  Now, on the first Christmas free of his obligation to be nice, he’s out to be naughty, and payback on the angel that beat him a century earlier. 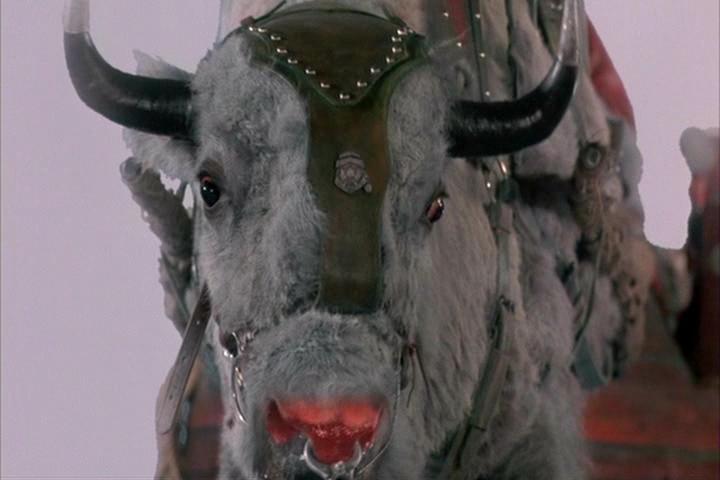 Reindeer my butt.  I have a mighty white buffalo

The script doesn’t offer many surprises.  Grandpa’s identity is easy to guess, Nicholas and Mac’s eventual romance is a given and the script starts to run out of steam in the final act.  The last five minutes contain an outrageous resolution that doesn’t work, no matter how hard the actors try to sell it.  And, as expected, the obligatory set up for a sequel occurs just as the credits roll. But the script’s main flaw is the occasional moments of sophomoric humor.  A bit where Grandpa passes gas is just gratuitous, as is the sheriff with the vaguely obscene name.  The scene where Santa lays siege to a strip club seems included just so Goldberg can say, “Ho, Ho, Hos.”  And the bit with a lecherous preacher reciting the names of the dead strippers during a eulogy seems to go on far too long, even though it’s only a few seconds.

These moments might elicit a giggle or two from your inner nine year old, but the film doesn’t need to rely on such juvenile antics.  The scenes between Nicholas and Grandpa are more believable than you’d expect from a cheesy horror film, the action sequences are great, and the explanation of the curling match that cursed Santa is a terrific spoof of the Rankin/Bass Christmas special.  And it’s really well done. Sure, taking out the sophomoric bits would lessen the film’s running time, but I think Steinman could have written something better, given how much fun the movie. This is soooooo good.  Don't miss this scene!

The actors do a great job.  As the heroes, Smith and de Ravin are saddled with the least interesting characters, yet both deliver good performances.  Playing off his wrestling persona, Goldberg chews up (and smashes through) the scenery with glee.  The cast members in the opening scene are terrific in their walk on roles, and Culp’s performance is so good, one can excuse him for acting out a fart joke.

Santa’s Slay isn’t a classic by any means.  But it’s a delightful package full of merry holiday mayhem wrapped up with a big cheesy bow.  The perfect antidote to the incessant cheer surrounding the holidays, this is a film horror fans can share with family and friends (along with the right amount of spiked eggnog) and not end up with a lump of coal in their stocking.
Posted by Chris McMillan at 8:11 PM