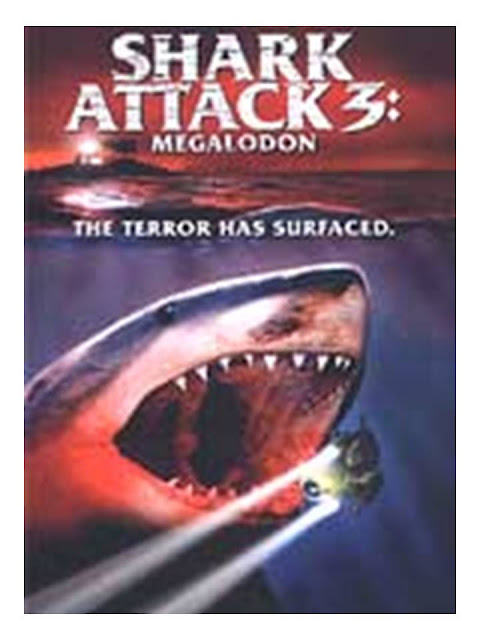 One can only imagine how Steve Alten felt when Shark Attack 3: Megalodon hit video shelves.  In 1996, Disney purchased the film rights for his first novel, Meg, before it was published, sparking a bidding war for the book.  His novel about a Carcharodon megalodon (a prehistoric predecessor of the great white shark that could reach up to 60 feet in length) brought up from a deep-water trench, went on to became a best seller, as did the sequel. Oh yeah, don't tell me you won't pay to see that on the big screen in 3D.

Yet the film version languished in development hell for years.  Even after the film rights were picked up by New Line Cinema in 2005, with director Jan de Bon (Speed) attached to the project, the film never made it past the planning stages, as the expected budget would have been over $150 million in order to do the novel justice.

To be fair, Alten’s novel isn’t great.  It’s predicable, full of stock characters and not particularly engaging during the non-shark bits.  But the book does have some great cinematic moments, which would have outshined this dull, lifeless rip off had even a few scence made the transition from Alten’s book to the screen.

Shark Attack 3 deals with a submerged telecommunication line attracting a baby megalodon up from the Challenger Deep Trench, threatening the tourists at a Mexican resort.  Resort lifeguard Ben Carpenter (John Barrowman from Doctor Who, Torchwood and Arrow) tries to identify the fish from a tooth he dug out of the telecommunication line.  But, as most Internet sites deal with the identification of living sharks, he can only post a picture online and hope for a reply.

Ben's photo draws the attention of Cataline “Cat” Stone (Jenny McShane from Grimm), a paleontologist who poses as a marine biologist to gain Ben’s help and capture footage of the big fish.  As expected, shark mayhem ensues until Ben, Cat and her crew kill the small megalodon.  Unfortunately, a full size one has made the trip up from the trench and threatens to turn the coast into its personal feeding ground.

Yep, the first thing it does is swallow a freaking boat!

Throw into the mix a sleazy resort owner, a CEO covering up the fact that his cable is drawing the megalodons to the surface, and an ex-Navy sailor with access to a two-man submersible (and a torpedo!) looking for revenge, and you have the ingredients for a fun slice of cheesy goodness.  But the filmmakers dropped the ball and delivered one of the most boring giant shark movies ever made.

Writers Scott Devine and William Hooke took the basics from Alten’s novel (megalodon rises from the trench and has a final confrontation with a minisub), cribbed scenes from other, better shark movies (everything from Jaws to Deep Blue Sea gets a nod), then populated their script with sleazy people in power, stupid victims and stereotypical “bro” behavior from most of the male cast.  Even worse, people pull out weapons, ranging from a shotgun to grenades (and that freaking torpedo), out off duffle bags and garages just to move the plot along.

I can’t believe no one thought the last two weapons might seem a bit out of place, but lousy writing is only part of the problem.  Director David Worth seems more concern with getting the film in the can, rather than simple things like continuity.  Ben takes a photo of the small megalodon’s tooth, yet his fingers are absent when the picture is uploaded on his computer.  As Ben and Cat climb a rope ladder to escape the full sized shark, they trade positions with surprising ease.  And let’s not get into the ever-changing size of the adult megalodon, which fluctuates with every morsel it swallows. 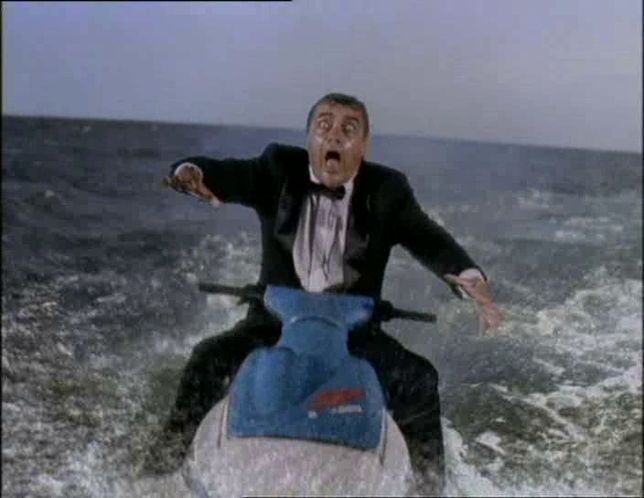 Not to mention this incredible moment of green screen insanity.

Even worse, the film is devoid of any suspense or tension.  Sure, we know who’s going to live, and which characters will end up as shark snacks, only because it’s rather obvious in a B-movie.  Yet, when the smaller shark attacks Ben and Cat, even though the audience knows they won’t die, the scene lacks any sense of danger.  It plays out too long, making the shark seem ineffectual, clumsy and ripe for extinction.

Of course, one can’t discuss Shark Attack 3 without mentioning the most awkward pickup line ever uttered on film.  Yeah, that moment when Ben suggests to Cat that, rather than getting some sleep before taking on the 40 foot shark, they go to her place and he...

Look, I’m not going to write it out, but his suggestion involves a crude offer to provide oral sex.  And though the line works in the movie, it would more likely get you a swift knee to the crotch (and a night in jail) rather than sexy time in the shower in real life.  It's so misplaced, you wonder what the screenwriters were thinking. 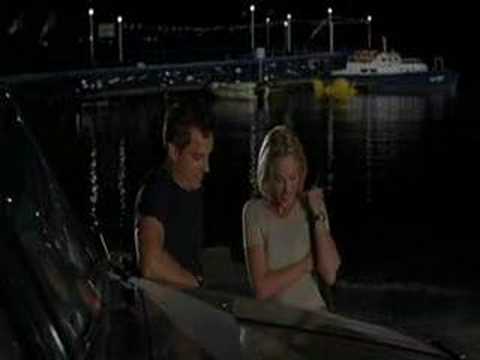 Seriously, don't try this line at home.
Or outside a bar.
Look, just never utter it to a woman.

But you can’t blame them for this clunker.  According to interviews on Friday Night with Jonathan Ross (2006) and Al Murray’s Happy Hour (2007), Barrowman admits to adlibbed the line to make McShane laugh (to no one’s surprise, it didn’t work).  But director Worth thought the line was funny and left it in the final cut.  I only bring this up because nothing else better summarizes how this train wreck of a film came about than the story of a raunchy adlib that was added to the film, rather than a blooper reel (or better yet, dropped in the cutting room trash can).

About the only good thing in the film is the use of real shark footage for the attacks.  It doesn’t always work, as the shark is obviously carrying off a bleeding seal carcass after attacking a human, but it’s better than the CGI shark effects used during the final act.  And when the full sized megalodon appears on screen for the first time, it’s a bit jarring.  Sure, as mentioned above, the shark’s size varies according to the shot, but watching a real shark gulp down a sleazy character is quite satisfying.

constant scale while you feast your eyes on this CGI abomination.
But you’ll find most of those moments on YouTube, as well as the previously mentioned pickup line.  And that might be the best way to watch Shark Attack 3, as a disjointed series of shark attacks bypassing the cardboard characters, horrid dialog and silly plot conveniences.

But, should you decide to brave this one in its entirety, first read Meg.  You’ll find the novel a simple, pulpy read with several of same problems I mentioned in this movie. But just thinking about the first pages of the novel, as a megalondon takes out a T-Rex during a prehistoric prologue, will make you feel the same frustration Alten must feel in knowing this abomination was filmed before his giant shark tale.

Again, SO WORTH THE PRICE OF ADMISSION!
Posted by Chris McMillan at 7:46 PM