Another entry in the giant shark movie genre, Fred Olen Ray’s Super Shark is a pleasant enough time waster.  The film moves at a pretty brisk pace, with attacks by the giant shark coming every ten minutes or so, and the film manages to acknowledge how silly the concept is while not overwhelming the script with too much camp.  It's a deft balancing act that the film pulls off, being really stupid while admitting it without insulting the audience's intelligence, and Ray manages to pull it off.

As expected, the plot isn’t important.  You’ve got an offshore oil rig using toxic chemicals to break through a layer of rock, which releases a giant, prehistoric shark that can walk on land (yep, you read that right) and is impervious to bullets.  After the shark sinks the platform, a scientist for the Oceanic Investigation Bureau (Sarah Lieving) hires a boat captain (Tim Abell) to take her near the site.  Finding the toxic sludge in the water, she starts question the company’s CEO (John Schneider of The Dukes of Hazzard).

Of course, the company has to hide its involvement in the rig’s collapse, the shark keeps gobbling down beach goers, a bunch of ladies credited as “Bikini Girl” stroll through the film, and Jimmie J.J. Walker gets to ham things up as local radio DJ, Dynamite Stevens.

Fortunately, the humor in the script tends to be a bit better than Walker’s character name (you remember Good Times, right?  No?  Oh, I’m so old.).  The script pulls out the standard “we can’t close the beach” troupe by having a city official so up out of nowhere before the final confrontation to mention the troops have to take the Super Shark down before the big event next week.  And he’s gone after that.

The film also pokes fun at one character’s survival during the final minutes, and the script avoids any political message until the final scene.  And that should have been eliminated, as the scene, and political reference used, just doesn’t work.  I suspect the filmmakers wanted to use every scene with Schneider and weren’t about to leave anything on the cutting room floor.  But, as the last scene of the film, it might sour your opinion of the film.  Ray should have ended on a high note, the unexpected survival moment.  It’s a funny moment, and a much better way to end the film.

It’s no use commenting on the special effects, as they are pretty bad.  The shark animation is horrible, while the walking tank looks like a second-rate AT-AT that manages to move despite a design that laughs in the face of practicality and physics.

Please, someone explain to me how either of these CGI creations
can actually interact on a beach.  I dare you.

But the movie has a few things going for it, aside from previously mentioned humorous moments.  For starts, it begins as the shark attacks the walking tank, cutting to the earlier events that unleash the fish.  It’s a smart move, as by showing the big moment early, Ray is hoping to catch the audience’s attention and make them wait for the payoff.

The acting is solid, for a movie of this type.  Lieving and Abell working well together as the leads and Schneider resists twirling his moustache (figuratively speaking) as he transitions from smooth talker to sleazy villain.

As for Walker, his main scene is to introduce the bikini contest, which pads out some running time with a bit of eye candy, as well as set up another shark attack.  And if you’re surprised that Ray included a gratuitous bikini contest into his film, well, his filmography contains 17 movies since the year 2000 that contain the word bikini. 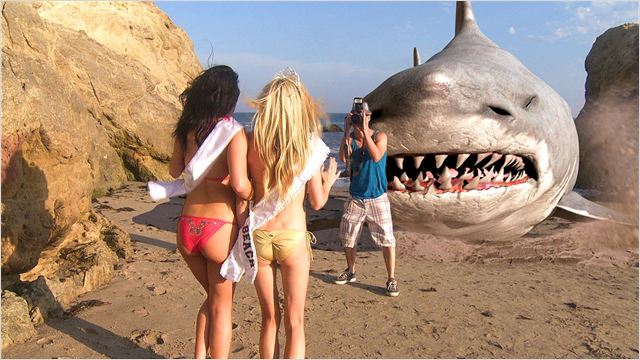 Wow, that photographer is so dedicated, he didn't hear
the giant freaking shark sneaking up on him.

Ray co-wrote, co-produced and directed this feature and, like much of his earlier work (I’m thinking Hollywood Chainsaw Hookers and Evil Toons here), it’s a fun watch for those days when the shadow over Portland turns to rain clouds.  His films won’t be winning any major awards anytime soon, but Ray delivers a fun little slice of cheese with enough action, humor and eye candy to distract you from a rough day at work.  And sometimes, that’s all you need from a movie.

Yep, sometimes bad CGI shark verses flamethrower makes one forget
how bad the rest of the day was.
Posted by Chris McMillan at 6:57 PM